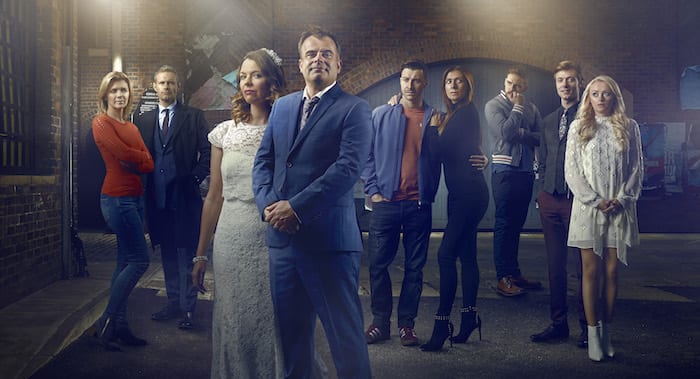 Soap fans should strap themselves in for a rollercoaster ride as Coronation Street‘s autumn season kicks off with a series of dramatic storylines next week.

From Monday, viewers can expect shocks, secrets and lies to be revealed, while blood WILL be spilt in some of Corrie‘s most dramatic ever weeks. And there’s also the return of a well-known character at the end of the week.

Two weddings and a funeral will be the backdrop to the drama starting from Monday 8th October. It will continue at breakneck speed over the Wednesday night episodes before a jaw-dropping finale on the Friday night double-bill involving a high speed car chase. But who will survive?

It’s the morning of the wedding of Tracy Barlow (Kate Ford) and Steve McDonald (Simon Gregson) and Tracy can barely believe her dream day is finally here. But dogged by doubts over Steve’s confusion over the “free pass”, a suspicious Tracy ends up accusing Steve of having a fling with Abi (Sally Carman). As Tracy goes on the warpath, Steve tries to convince his bride-to-be of his innocence. But, given he slept with his ex Leanne (Jane Danson), he’s not exactly innocent. Can Steve talk Tracy into going ahead with the wedding? There’s also a surprise wedding being planned by Daniel Osborne (Rob Mallard) who is decorating the urban garden ready to propose to his pregnant girlfriend Sinead Tinker (Katie McGlynn). Sinead is greeted by Daniel and her close family and friends after stepping off the tram fresh from her secret appointment at the hospital where she has had an MRI scan for the lump found on her cervix, unbeknownst to any of them.

As she arrives back in Weatherfield, Daniel drops down on one knee to propose.

Meanwhile, Ryan Connor is in even deeper trouble in jail, when a corrupt police officer reveals he’s in cahoots with drugs boss Ronan – before giving him a beating. Dr Ali, meanwhile, is suspended from work because of his involvement in the death of Ronan’s son, Cormac.

Things go from bad to worse for Ryan who returns home to an unsympathetic Ali, while Robert finds a funeral wreath on his car and another arrives at the flat.

A distraught Michelle sets off to find Ronan in a desperate bid to keep her son safe, and finds him at Cormac’s funeral wake. She implores Ronan to see that Ryan was trying to protect his son but is greeted with contempt by Ronan.

Ronan is hellbent on revenge, and Michelle tells Ryan and Ali they’ve no choice but to go and ask for police protection. But they soon realise Ronan is following them.

With no choice but to go on the run, Michelle floors it with Ronan in hot pursuit.  But when Michelle’s engine suddenly dies (after Tracy had earlier tampered with her car) the Connors become sitting ducks and a dramatic car crash takes place as Ronan wreaks his revenge and drives straight at Ryan.

An ambulance is called as the victims fight for their life – but who will survive?

As the week comes to a close, the shock return of Nick Tilsley (Ben Price) sends further ripples through the street. Nick is back for Leanne, the pair have unfinished business, but what has Nick been up to in his time away from Weatherfield?