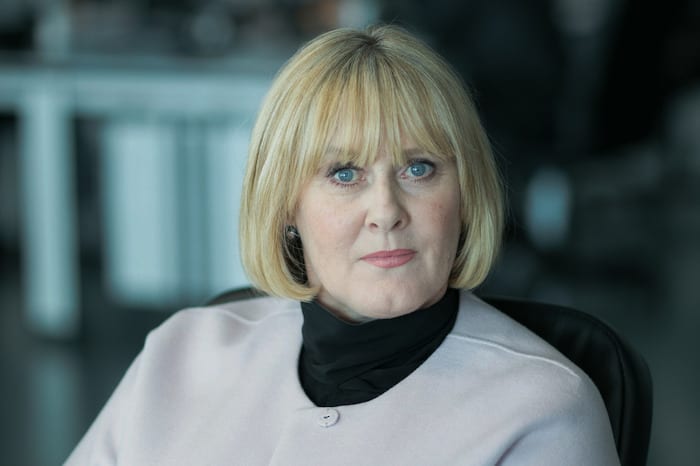 Richard Gere makes his TV lead debut as a media tycoon in MotherFatherSon this week with Oldham’s Sarah Lancashire starring alongside him.

At the core of the eight-part series is an estranged family – the mother Kathryn (Helen McCrory,) father Max (Gere) and son Caden (Billy Howle) – whose complex relationships are set against a political backdrop where the themes of populism and power are explored.

“Angela’s a self-made business woman. I would say a philanthropist, in a certain sense, and she is a great believer in harnessing the power of the people,” says Sarah.

“She has political inclinations, but she is popular with the people because she doesn’t consider herself to be a politician. She’s a real outsider in Westminster.”

Writer Tom Rob Smith cleverly avoids clichés and there are plenty of twists and turns to keep people guessing – and more than a couple of eye-popping scenes that are set to get the nation talking.

Here she talks about what else we can expect from the provocative show and what it was like working opposite a Hollywood legend.

Where do we meet Angela at the beginning of MotherFatherSon?

We first see her in a meeting with Max (Gere) wanting his help. She wants his allegiance for her political party, to back her campaign. It’s a fun relationship between the two of them, because it’s a power struggle really. Angela admires Max and Max admires her. It’s a meeting of minds in a sense, almost like a chess match. At the start she needs him more than he needs her, but it becomes apparent that if he can get her into Number 10 then she could really use the power that would give her to benefit him. So, it’s potentially a good relationship for both of them.

What was it like to work with Richard Gere?

It tremendous and we’ve had a lot of fun because they’re quite evenly matched in their ambitions and in those trajectories. As I say, it’s a little bit like a chess match when you get them together, so that’s quite a thrilling part of their relationship. He has something she wants and she has something he wants, and it’s the perfect partnership if they can make it work.

What drew you to the series?

Purely the writing – they’re some of the best scripts I’ve ever been sent and I wanted to be part of it. I read the first six episodes in one sitting, and then asked them to send me through seven and eight. It always boils down to the writing really – and Tom’s writing is tremendous. He’s very direct and succinct. Interestingly, reading Angela on the page, she for me read as pretty gender neutral, which is exciting and that doesn’t happen very often when you read a female role.

Do you consider the role as something of a departure for you?

It doesn’t feel like a departure as such because I try and choose my work purely by the writing. Because Tom is such a brilliant and exciting writer he has such a clear voice on the page, and his writing has momentum. It’s so finely tuned. It’s quite thrilling when you read that. When you receive a script and it leaps out at you and it’s breathing with its own heartbeat. I suppose when you read something like that it’s not a choice of whether you do it or don’t. It feels like it chooses you, so you just do it.

What do you think sets MotherFatherSon apart from other shows?

It feels beautifully epic. There’s this sense of scale about it, and that’s a rather unusual quality for a contemporary piece to have.

How about the most challenging aspect?

I suppose trying not to fancy Richard Gere. That was quite hard.