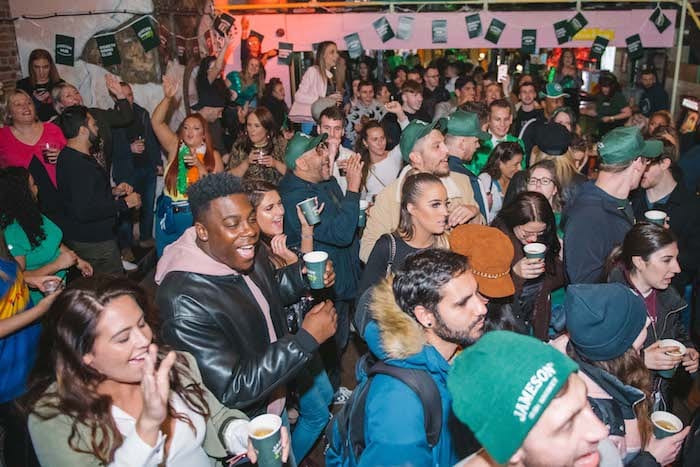 It’s that time of year again. The Rugby World Cup kicks off on Sunday, and Manchester’s fans will be playing close attention to this weekend’s events.

There have already been some memorable moments, like Ireland’s skipper Rory Best colouring in the eye of a Japanese wishing doll with bemusement. But things are just getting started.

Twelve months ago, Ireland looked like the best team in the world. Now it could be anyone’s match with them coming in fifth as favourites to win with around 12/1 odds in the bookies. You could tag both teams as dark horses, and right now it’s all to play for.

England, meanwhile, have had some ups and downs these past 18 months, but are back to looking like one of the three teams who can potentially take home the cup. They’ll play later in the day, taking on Tonga in what could be a bruising encounter.

To celebrate the season, Jameson Irish Whiskey is transforming The Loft on Quay Street for the ultimate rugby experience, complete with retro games, a fully stocked Jameson bar and (of course) a massive screen to watch all the rugby action on.

The first match of the Cup kicks off on Sunday 22nd September – Rugby Super Sunday – with Ireland and Scotland facing off at an 8.45am kick off BST (4.45pm local time in Japan).

For the Ireland vs Scotland match on Sunday morning, The Loft will have breakfast laid on with bacon butties, omelettes and a welcome drink to help you make sure you’ve lined your stomach before getting stuck into the game.

Doors at the Jameson Club House open 15 minutes before kick off time, giving you plenty of time to grab an Irish coffee or Bloody Molly (Bloody Mary’s better sister) and settle down in a comfy spot. Or if that’s not your jam, tuck into a Jameson ginger ale and lime or an Irish coffee with your breakfast.

Following this, they’ll be hosting a Jameson masterclass with their Irish whiskey brand ambassador offering you the chance to try some of their Caskmates IPA (finished in IPA barrels) or Caskmates Stout and beer pairings so you can discover what makes them so special next to a beer.

And for the England vs Tonga match later on Sunday morning, the team will be rolling out fat Jameson burgers, with veggie and vegan options available alongside a complimentary drink.

All this will set you back just £10 for a meal (either the breakfast or lunch option) and drinks, and a front row seat to all the action, and it’s just an extra £10 if you want to join the masterclass. Not too shabby.

And, since the Jameson Club House is opening especially to show selected home nation weekend games, you can do it all again when Japan play Ireland on Saturday 28th September and England meet Argentina on Saturday 5th October. See you there.