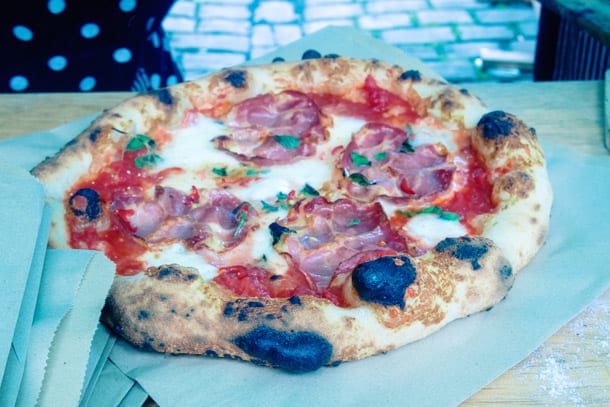 Rudy’s Pizza is named after a puppy. Owners Kate and Jim moved back up North from London this year, bringing a dog and a wood fired pizza concept with them. So far, so attractive.

Rudy’s is currently a pop-up gazebo/portable oven affair, with very real hopes of moving into a unit soon.

The pop-up phenomenon is huge in London with it’s plethora of beer gardens, though in Manchester, the concept is proving slower on the uptake.

Rudy’s slot right into where pub food is moving out, by setting up camp in beer gardens for those wanting a Neapolitan pizza with their beer or a feast to sate the munchies after several. And what a pizza it is. 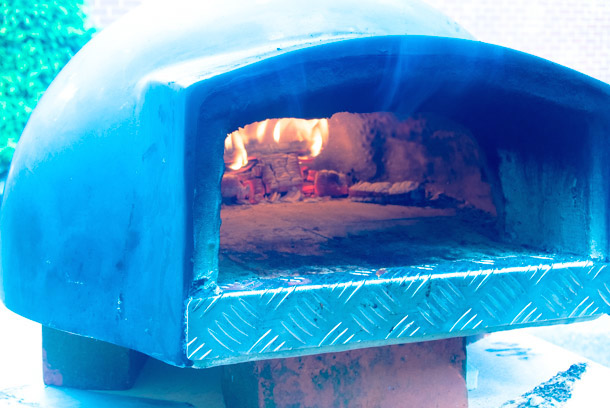 We visited Kate and Jim for a taste, sitting in the cosy beer garden behind Bar Fringe in Ancoats (a site they will stay until the end of September.)

Though Kate and Jim agreed that a ‘bad’ pizza is a very rare thing, these pizzas topped the other end of the scale.

The dough was in particular, exceptional. The 48-hour dough-making progress – in which it is double-proved and hand kneaded to retain air bubbles – creates the most fantastic of bases that is neither cakey nor crispy. This results in a crust that is part of the experience rather than a cast-off, good only for a BBQ dip.

The menu is short but sweet with the basic margarita (here called a ‘Margot’) joining regulars such as the Copper – San Marzano tomatoes, fresh mozzarella, coppa salami, fresh oregano and chilli oil. We tried the latter, but with fresh chillies. 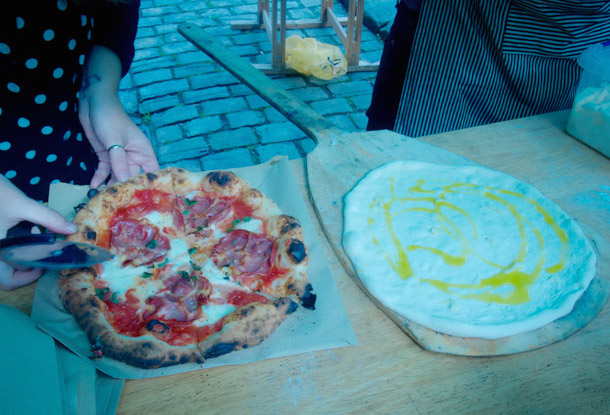 Special pizzas will also change up the menu – this week it’s courgette, ricotta, garlic, rocket, sweet roast red peppers and parmesan (our other tester!) but expect smoked pancetta, leek and rosemary in the coming weeks.

The classic pizza ingredients (crushed tomatoes, mozzarella and flour) are imported from Italy itself, while other ingredients are sourced locally: the rosemary bush in the garden of Bar Fringe for example, is used liberally.

The result is an all-in-all exquisite pizza that is reasonably priced, passionately made and zealously eaten. Let’s all keep our fingers’ crossed for a Rudy’s restaurant in the near future.

Their services are currently available at Bar Fringe between 4 and 10 on a Fridays and 2 and 10 on a Saturday.

Keep updated with the whereabouts of Rudy’s Pizza on twitter: @RudysPizzaMcr