I’ve not eaten in Rosso since its launch when it was a San Carlos wanna-be, so was looking forward to seeing how the once new-kid-on the block has shaped up.

“It’s completely over the top, but stays on the right side of camp…”

The first thing to say, is that it’s always been a fantastic room, the interior design makes the most of the domed ceilings of this former bank, with oversize lampshades adding a Lilliput touch and artwork from Mark Kennedy and others.

There is a big, mirrored shiny cocktail bar that I’ve visited more than once and always enjoyed, before you reach the stunning dining area set on two levels with booth seating and individual tables.

It’s completely over the top, but stays on the right side of camp and as we passed many a table with birthday balloons attached (hello do you really want everyone to know you’re the wrong side of 40?), it’s obviously a destination for celebration.

I went with Ginger who had been on the red wine most of the afternoon in ‘business meetings’. Red wine makes the Ginge more randy than normal, if that’s possible. And the gay, who had flat ‘corporate’ hair and shiny shoes, because he had been in a top secret pitch all day.

“The menu is huge – literally. A big red tome that’s like ‘This Is Your Life’ and as we settled into a dove-grey booth…”

The menu is huge – literally. A big red tome that’s like ‘This Is Your Life’ and as we settled into a dove-grey booth, to peruse it our charming waiter Toni took us through the options. There are specials, but no specials menu, and when asked what to recommend he suggested the boys might like T-bone and I the sole –has he seen me eat? I might be on the tiny side but I reckon I could win a pie-eating competition.

The food is Italian, hence the name Rosso, Italian for red and also a homage to United – Rio is rumoured to have money in it.

The chef is called Steve and I don’t know much about him but the menu has definitely changed since my last visit with a sure confidence that this is now a restaurant in its own right.

Starters are from £4.95 and as well as the classics you would expect there are twists on dishes throughout. 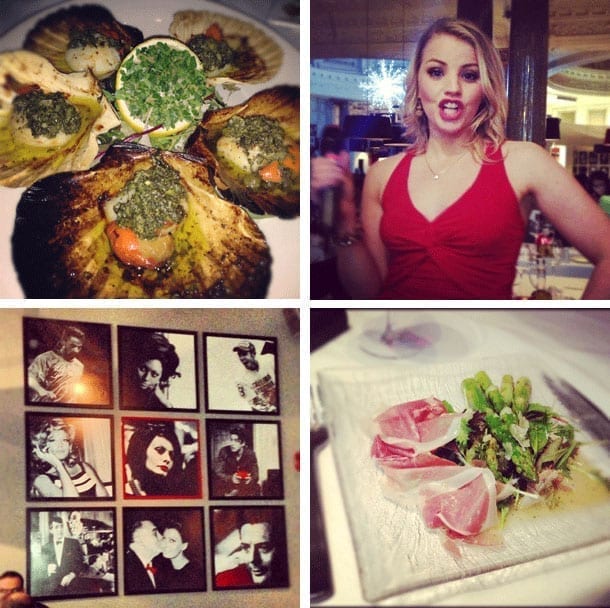 I went for the pate. An example of how dishes are twisted as this was chicken liver and pistachio. I have a fondness for pates and terrines, the gay and I get foie gras from Alex (our Paris connection) when we can. This was great. Course, gritty and earthy it, could have used more salt but overall a winner.

“…a gorgeous blonde bombshell who cruised the room, crooning with a delightful voice.”

The Gay had scallops which looked fantastic, with six big juicy ones in a salsa verde sauce, he detected mint in this as well and checked with Toni. There was mint and the Gay was in heaven.

Ginge had asparagus with prosciutto and melted butter. He said this was both crunchy and juicy, just what you want in asparagus. Then he met his future wife. Natalie McGrath, a gorgeous blonde bombshell who cruised the room, crooning with a delightful voice. Ginge wanted to eat her and said “She’s rocking my world, I wish she’d stop singing and sit with me” – that was so he could use his charms on her and not because he didn’t like it. 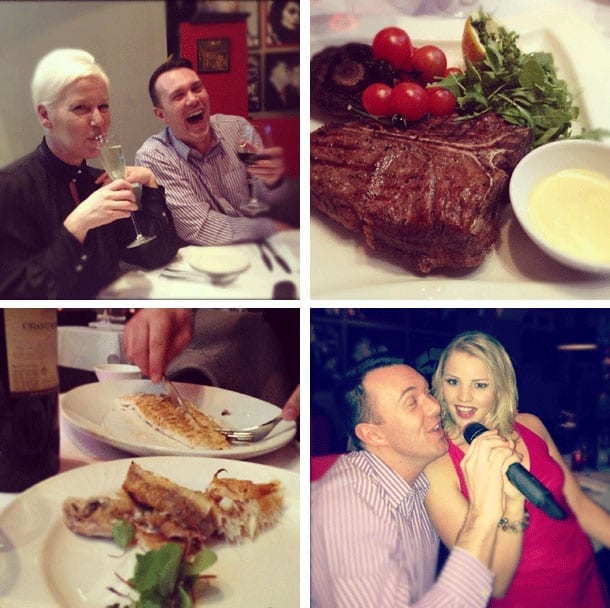 The gay thought the singing was a bit ‘Crazy Wendy’s’, I thought it was more old school Lounge 10 and enjoyed it.

The gay and I went off piste on Toni’s recommendation. The Gay was given probably the biggest T-bone I’ve ever seen. The joy of this is that bone acts as a barrier between sirloin on one side and rib-eye on the other, allowing you to go from lean to more fatty. It is the first time the gay reckoned he had ever been over-faced by a bit of meat.

He chomped manfully through it, enjoying sides of a perfect beurre blanc sauce and big chips. It was good he reckoned and I managed to gnaw on a bit of it so can confirm it. Good but not the best steak he’s ever had.

My sole was another special. A whole big fish, expertly boned at the table and served with garlic spinach which was just fantastic and another beurre blanc sauce but this time with a tangy lemon edge.

It was good, but again not the best sole I’ve had and thinking afterwards, I wonder whether you should stick to the menu at Rosso. The Ginge’s Bistecca Gamberoni, sirloin with prawns to you, was absolutely fantastic and just maybe the kitchen is best serving what it cooks the most, this would be why the starters were so good. Also, I do think if you have specials, a specials menu really helps. 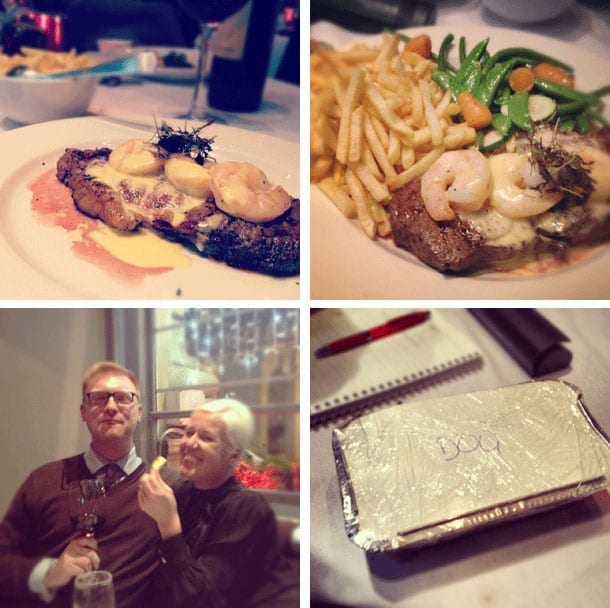 You can also opt for pizza from just £8.95 and pastas as well as a wide fish selection (including whole lobster), chicken and a range of other meat secondi. And they will be doing Christmas Italian style shortly.

We accompanied our feast with house prosecco (£24.95) and house red which starts from £16.95. Toni also produced a fabulous Santa Cristina red for the boys to try, which he said is so pure that they wouldn’t get hangovers. Sadly, they don’t do it in prosecco.

By this time, we were full. And I mean, really full as well as happy and sated. We couldn’t do just dessert to dessert so we said we would be back to review the puds in Rosso part II – the sequel.

Then it was off into the night armed with the left over T-bone for Nat’s dog (helpfully labelled ‘DOG’ on the box by the staff) and the Ginge attempting to line up a Swootie call (Swinton Bootie Call) – lucky girl.

We would definitely see Rosso again. We loved parts of it deeply, madly, truly but it has a bit of work to do on the specials.