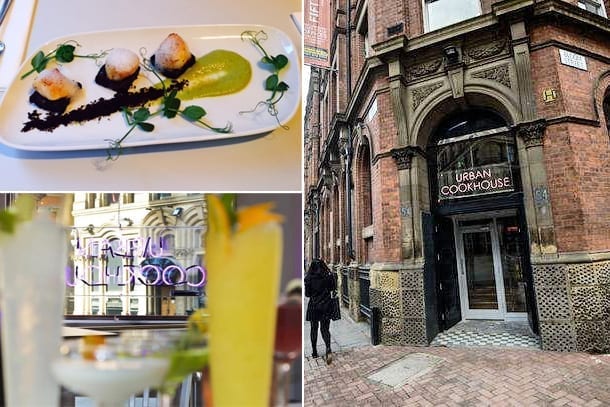 The newly opened Hotel Gotham has been taking all the headlines recently for its bold transformation of an old King Street bank building into a five-star hotel that wouldn’t look at all out place in old New York. But they aren’t the only ones looking to the Big Apple for inspiration. Urban Cookhouse aims to replicate a classic downtown NYC loft, with quirky fusion dishes in a low-key, relaxed environment. And on that premise, we think they’ve pretty much hit the sweet spot from day one.

‘It’s eclecticism is something
to be admired…’

You’d be forgiven for feeling like a new restaurant opens in Manchester every day at the moment. But while King Street, Spinningfields and the Northern Quarter fight amongst their respective hubs for superiority, Urban Cookhouse owner Tim Coulston chose to convert an old shipping warehouse on the comparatively untapped Princess Street as the location for his delightful new fusion restaurant. By consequence, as you approach the shiny, neon letters of fashionable, lilac hue that spell out the restaurant’s name on the door, it’s difficult to miss – or ignore. 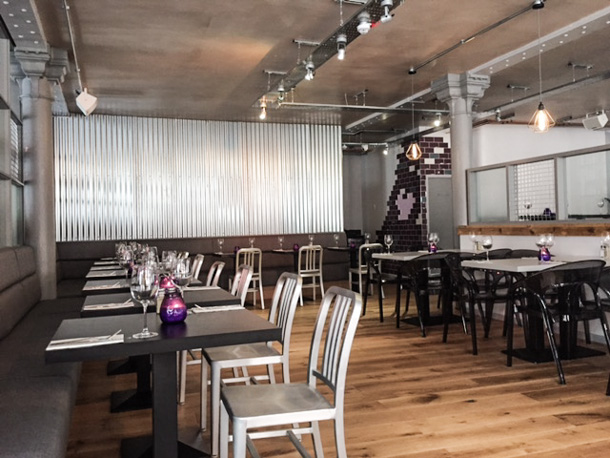 The restaurant is wide and open, stylishly decorated in silver and purple, with clean, cream-coloured pillars holding up the exposed metalwork that lines the ceiling. It’s extremely laid-back and the New York look and feel is not exaggerated in the marketing spiel. The minimalism means the food is able to take centre stage. A challenge it triumphantly accepts.

Although clearly a restaurant first and foremost, Urban Cookhouse will also merge into a late-night, live music bar towards the weekend, so it made sense to dive into its interesting cocktail menu, a selection of classics and funkier, signature concoctions – the latter all priced at £8. 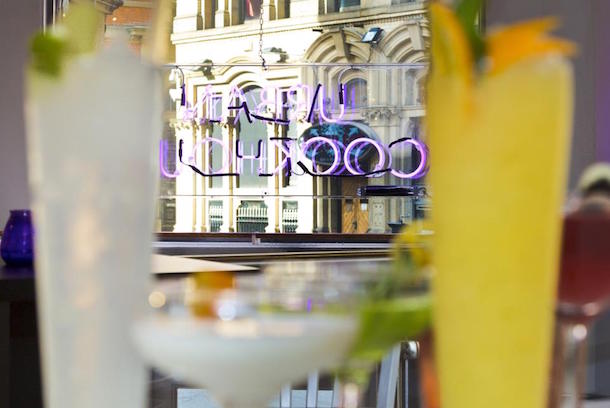 The Midori Sour was a lovely opener – sweet, peppery and lip-smackingly fresh. More interesting though, was the Bed & Breakfast: Honey Wild Turkey Whisky infused with bacon for two weeks before straining, and bitters, served with bite-size brioche slices. This was a heavy drink, make no mistake, and not the most appealing to look at. But to drink, it’s wholesome and richly flavourful. Real care has been taken in getting the whisky just right, and I was told they are considering the implementation of a bacon stirrer too – essentially making it a meal in itself. Sure to be popular with the Friday night crowd. 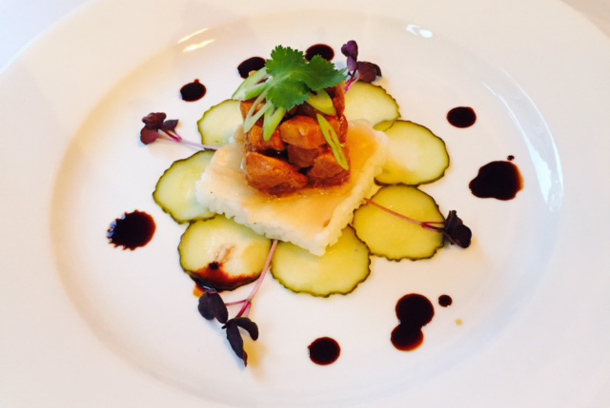 The first dish to arrive was a complimentary tuna tartare with sushi rice and pickled ginger. Exotic and a perfect example of Urban Cookhouse’s Pan Asian intricacy, the tuna balanced nicely with the soft, sticky rice and fragrant ginger. Light and zingy, I could of eaten a whole plate.

To start I had the Crispy Cod Cheeks with Asian Slaw, Chili and Lime Jam (£7.50). Texturally, this was a delight. Flaky white fish, light, crispy batter and a crunchy slaw combined for a tasty and attractively presented starter. Sweet jam with a slightly spicy kick coats the salty, fish batter, adding a satisfying extra dimension to the dish. My guest opted for the Scallops with Black Pudding Crumble, Pea Puree and Foam (£7.95). She found the black pudding to be full bodied, rich and earthy, and the scallops – tender, light, perfectly cooked and seasoned. The dish glistens with foam and the Pea purée was a subtle accompaniment but enhanced the plate. Both winners, appropriately washed off with an accompanying bottle of Pinot Grigio.

Onto mains. I had the Lamb Cannon and Neck, Carrot and Swede Fondants, Boulangere Potatoes and Port Wine Jus (£18.95). The mixture of pink, succulent and and herby lamb is joined by an extremely generous tray of delicately soft, buttery potatoes, and it didn’t really put a foot wrong for me. At a push, I could accuse the veg of being a bit under for my taste, but bathed in the rich jus, it hardly mattered. I’d struggle not to order this again on a second visit. 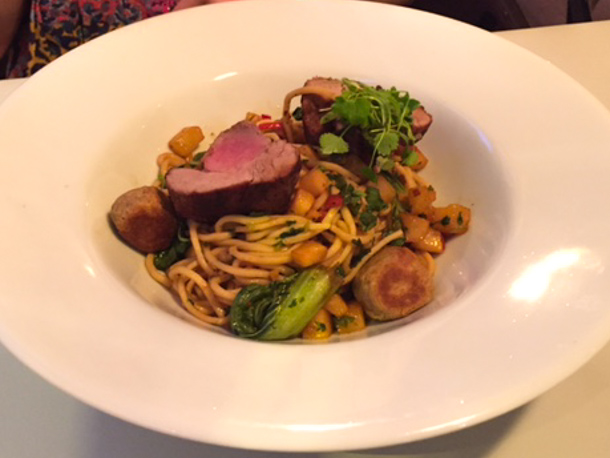 On our informative server’s recommendation, we also had the Jerk Pork Loin with Sweet Chilli and Pineapple noodles, Pak Choi and Jamaican Fried Dumplings (£16). First words on the pork from my date: “Oh wow” – tender when it is so often tough and drenched in jerk flavours that fiendishly linger on the tongue. The soft noodles are broken up by the peppery crunch of the pak choi and the succulent pineapple pieces add a colourful zest. Of the gooey dumplings, the complaint is that there are not more to devour.

The Dessert menu is modest, but two stood out immediately for us: the Caramel Trio of Honeycomb Crème Brûlée, Liquid Popcorn and Ras El Hanout Caramel (£5,25), and the Carrot and Orange Cake with Lemon Meringue Panna Cotta (£4.50). I wasn’t immediately keen on the hot, salty popcorn liquid, but as a compliment to the fluffy creme brûlée, it sings. For caramel lovers, the trio dessert is gloriously indulgent. I ran out of room for the honeycomb, but it’s there to make it all look good. 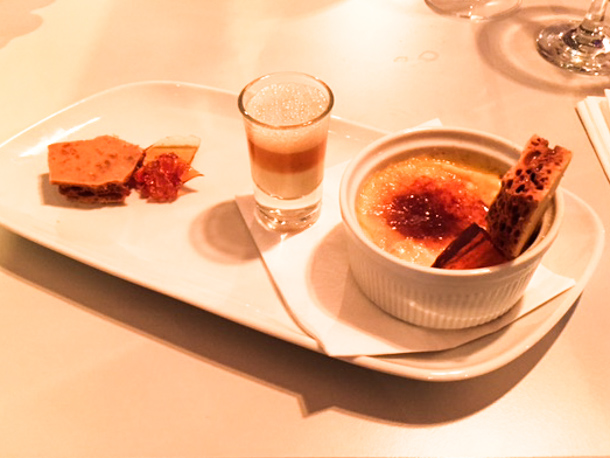 The cake is perfectly sized, sweet and gooey. Combined with the sticky meringue and raspberry sauce, you’ll need a sweet tooth, but we encountered no difficulty in polishing every crumb.

Urban Cookhouse does not take the term ‘fusion’ and misrepresent it. It’s eclecticism is something to be admired, particularly as everything else about the place is so modest. Whether the restaurant would benefit from a more lively and foodie-friendly location is open to interpretation. The restaurant seems happy to set its own pace. But if you’re looking for casual dining with a sense of worldly adventure, the Canal Street perimeter is certainly calling.