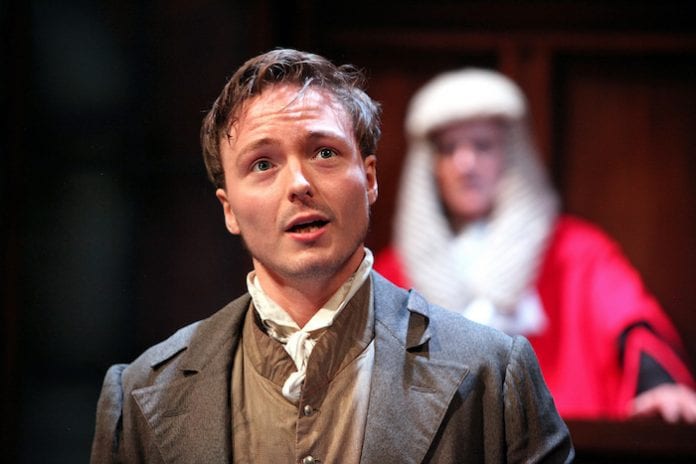 Ian Hislop and Nick Newman’s new play has an intriguing premise. It explores press freedom, free speech and how humour can broach the most serious of subjects, bring audiences pleasure and give them a break from the weightiest of subjects.

Where would we be, for example, without gags about Brexit? A joke, a cartoon in a newspaper, or a witty comment can make your day. So what happens when your joke offends?

We follow the true story of William Hone (Joseph Prowen), a bookseller who also publishes cartoons. He’s shy but give him a pen and pencil and it gives him the confidence to publish cartoons and satirical pamphlets which put a spotlight on the state of the nation.

He is taken to court on a charge of serious libel and blasphemy because two of his targets are the Tory government and the monarchy.

Although it’s set in 1817, it’s relevant today. Try replying to one of Donald Trump’s tweets  on a bad day and you are likely to be silenced and receive a partial twitter ban.

Marmite comedians like Ricky Gervais and Frankie Boyle are often accused of dividing audiences. You either laugh like a drain or find them deeply offensive. This explains the twee, sanitised appeal of Michael McIntyre, whose jokes about the school run and Waitrose appeal to arena sized audiences.

So on paper this play has plenty of appeal and celebrates an underdog who is willing to take on the establishment, to make political statements, and more importantly to make people laugh.

There is no doubt that it has been thoroughly researched but it feels like a very dry thesis about the power of humour.

What you long for are some genuinely funny lines. It’s only fair. But apart from a few silly but amusing sight gags and jokes involving alliteration (great if you teach English but audiences need something else), there is very little to make you smile here.

The story has everything you need to make a great comedy drama but it is spread too thin so each act is incredibly repetitious. The courtroom drama happens way too quickly and you never really get to know Hone yet there he is stood in the dock. You have no time to get to know him so any emotional connection just isn’t there.

As a small piece at the Watermill Theatre in Newbury, this probably worked better. But in the vast Lyric Theatre at the Lowry, it lacks atmosphere and feels strangely flat.

There are some songs designed to give you some whimsical elements and move the narrative forward, but the slow pace means that these moments just drag.

With so much to mine from current events, this feels like a genuinely missed opportunity. There is the odd nod and wink to Brexit and how the antics and bad behaviour of our politicians has not really altered. But, for a play about freedom of speech and power to the people, Trial by Laughter feels strangely conservative.

Steve Mayo’s excellent sound design means that we do have some pre-recorded hecklers and you can hear them as clear as a bell shouting things like “Get on with it!” Although this is done for comedy purposes, it will probably echo your own sentiments watching the play.

Trial by Laughter is at The Lowry until 2nd February.