Review: Things That Divide Us at 53 Two “lifts the lid on a huge humanitarian crisis” 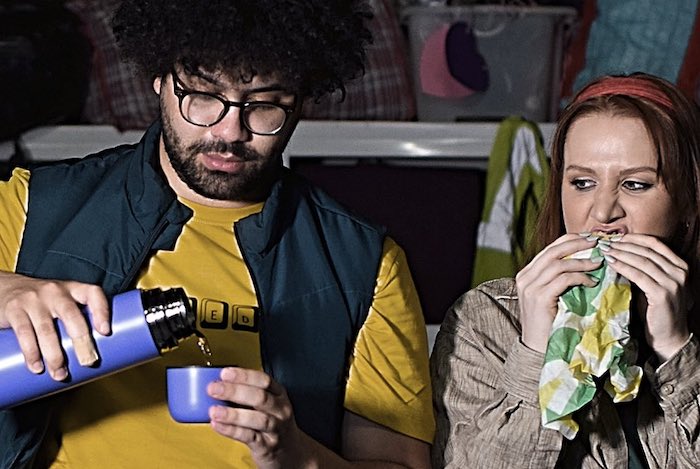 We have all seen the headlines about the Calais Jungle and we have also watched stories about the Rwanda flights programme, whereby people who arrive here are sent on a deportation plane to this east African country. For every person who thinks that this is inhumane, there are more that think this is a good solution to what they are told is a problem. Hence the title of Joshua Chandos’ new play; Things That Divide Us.

Joshua began writing this emotive and surprisingly funny play in 2018 and sent it as a submission for a writing competition during the lockdown. Director Simon Naylor read it in his role as judge and wanted to stage it at Manchester’s beloved 53 Two, He liked the central relationship between the two protagonists Kitty (Beth Lily-Banks) and David (Callum Sim) who work at the camp in Calais, helping displaced people who are seeking somewhere that they can call home.

“The fact that it was encompassed in this weird, almost apocalyptic environment just made it perfect,” Simon explains. 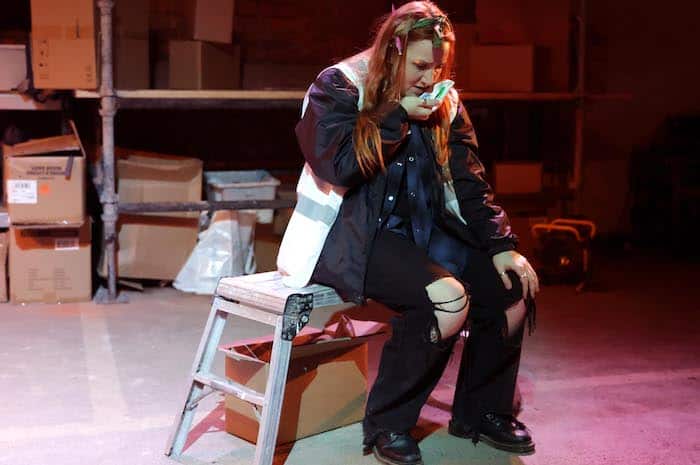 What is also interesting about this witty and wonderfully heart-warming play is that humanity comes from the descriptions of others, who become fully formed human beings; not others, as they are so often portrayed in our daily news.

Kitty is a fighter and she is doing what she believes is right her main piece of armour is her common sense. It offers her protection when all around her all that she can see and hear and see is hatred. In walks David – a man who is seeking his identity and place in the world. He wants to do good and like Kitty, he sees the humanity in the huge crowds of people outside who are herded like cattle and living on nothing except the kindness of charities like Care 4 Calais.

Things That Divide Us is a play that never preaches, instead, we are invited to meet the people behind a sensational news headline. So what you end up seeing is your neighbour, the woman you pass every day at the bus stop, a friend of yours who has moved to the UK and more importantly, someone who is fleeing for their life, only to find themselves in a camp … waiting for some sense of identity or the fact that someone cares about them.

This feeling comes across in the writing which is sharp, canny and filled with one-liners, that take the edge off what is a difficult subject to stage. The characters of Kitty and David have such rich and believable backgrounds and backstories that you feel as if you know them.

Beth Lily-Banks brings a ‘tell it like is’ quality to Kitty who is kind and giving but she has also learned not to be a wallflower. She wants to be someone that does something, as opposed to filling out endless petitions online. Her performance is engaging because she conveys all sides to this complex character and seeing her giggle excitedly when David arrives, shows a side of her she has almost left behind. 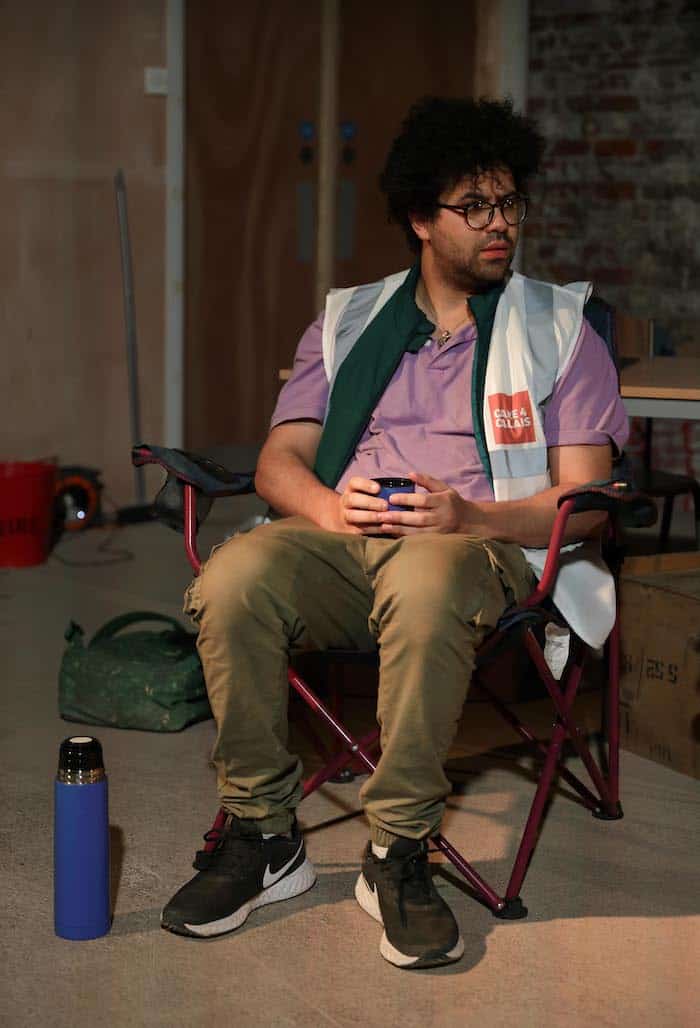 Callum Sim imbues David with a vulnerability and reminds you to never judge a book by its cover. To Kitty – he is a middle-class do-gooder. It turns out he is naïve for sure, but he is stunted by his past and he has as much fight in him as she does. And they form such a strong bond that it becomes them and the other volunteers against the world of harm outside, which threatens the displaced thousands in the camp.

Director Simon Naylor sees the value in these two characters and what they can give to an audience. So you become immersed in their recollections, their downtime, and their tales from home. He gives them space to breathe and as a result, they never become cliches and Joshua Chandos always has a double-edged line of dialogue ready to bring you back down with a bang. He is a master of comedy and pathos and these two devices work hand-in-glove throughout the play.

David Howell’s set is cluttered and messy and this resembles the camp outside and the chaos that people find themselves in, through no fault of their own. At times the sound design is too loud and there are lines of dialogue that I missed, as characters talk over the news or episodes of The Voice (France) and their lines are lost in music or headlines of the day.

Some plays try to do too many things to dazzle you into submission. Things That Divide Us proves that less is more. It is a two-hander with powerful messages but it never resorts to car bumper sticker statements or holier-than-thou dialogue or characters.

Instead, it is a very funny, yet uncompromising play which lifts the lid on a huge humanitarian crisis and instead of dehumanising them as ants scurrying around underneath a brick, we see people. And that stays with you, way beyond your journey home.

Things That Divide Us is at 53 Two until 1st October and tickets can be booked here.