Review: The Worst Witch at The Lowry

Before Harry Potter, there was Jill Murphy’s The Worst Witch, a series of books about the trials and tribulations of Mildred Hubble, a young girl made to feel like an outsider and that she will never be good enough.

The seeds of Murphy’s books were sown when she was a working class kid at a Catholic grammar school. The nuns who taught her with an iron rod became Miss Hardbroom and her coven of teachers/witches. The rivalry and bullying was projected onto the likes of Maud, Enid and Ethel.

Adapted for the stage by Emma Reeves, who first worked on a TV version of these popular books, this is a ‘less is more’ show. Often a big budget family stage show loses its heart behind smoke and mirrors and shock and awe to sell as much merch as possible. Here, the essence of the books remains and there is the odd bit of flossing and contemporary references to ensure that the most fidgety of children remain entertained.

This is a show within a show. Mildred is staging a play at school and the audience is invited. I say invited, because the minute you arrive you feel like a guest. Cast members chat to you in character and you really feel that you are part of the magic. 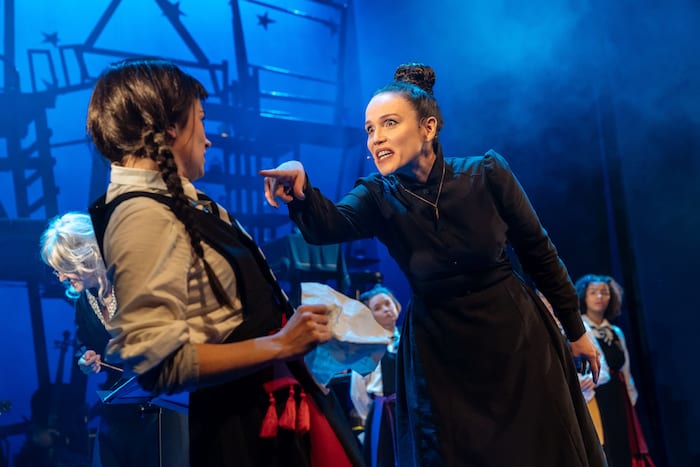 The cast is multi-talented and Theresa Heskins delightful direction means that they not only interact and chat to the audience but engage children in the audience, as this is a show where young people are encouraged to use their imagination.

For example, when Mildred drinks a potion which makes her and a friend invisible, all we see are pieces of cloth being held up, but you buy into it. You do not need a huge budget to win the ankle biters over: they are engaged from the minute they take their seats.

Danielle Bird is perfect as Mildred. With her messy hair and her lack of confidence, she reminds kids that even a witch can have doubts about their own ability. Her nemesis Ethel is played with aplomb by Rosie Abraham, who refers to audience members as ‘Salford plebs’, but she still manages to win you over and never quite descends into full-on panto villain, as you are fully aware this character has trouble fitting in, too.

Rebecca Killick has superb chemistry with Danielle Bird. Her Maud is a totally believable BF, as they lark about together as if the world is not watching. Rachel Heaton has a touch of Morticia Addams about her as Miss Hardbroom, who has a heart beneath her tight bun hairdo and hard-nosed exterior. 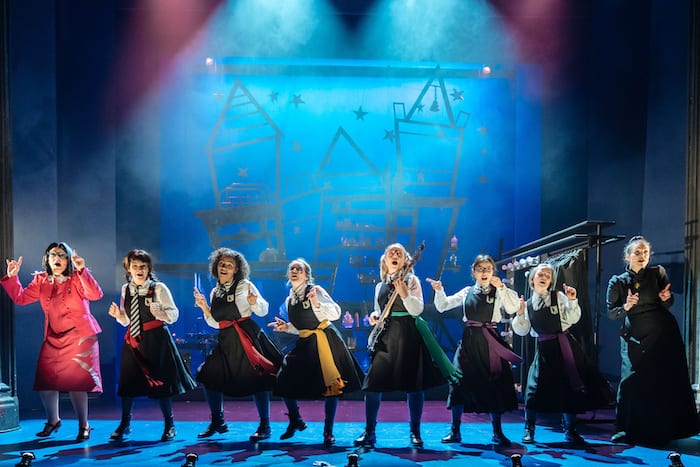 Polly Lister is a revelation in two roles – Miss Cackle, a lovely tutor and her evil twin, Agatha. She has a great way with the audience, inviting them in on the gags as they happen and is a great all round performer, spinning round to become Jekyll and Hyde within seconds.

The band of three make beautiful music together and provide the show with a zany soundtrack and all act in the show, too. Kudos to Meg Forgan, Megan Leigh Mason and Molly Grace-Cutler who never miss a beat. And Consuela Rolle’s Enid is as confident as they come, revelling in the magic she creates.

With the news filled with the same old stuff and JK Rowling’s Fantastic Beasts proving to be not that fantastic when stretched out into several movies, The Worst Witch offers you and your family a lovely night out. It is wickedly funny and has some pertinent things to say about school days and how cruel they can be at times.

But with an all-female cast, a female writer, adaptor and director, it is also making the point that sisters can do it for themselves, and that female characters can be bright, have fun and live without the aid of Instagram because they can make magical moments with their friends just being themselves.

The audience on the night I attended was spellbound. So was I.

The Worst Witch is at The Lowry until 31st March.