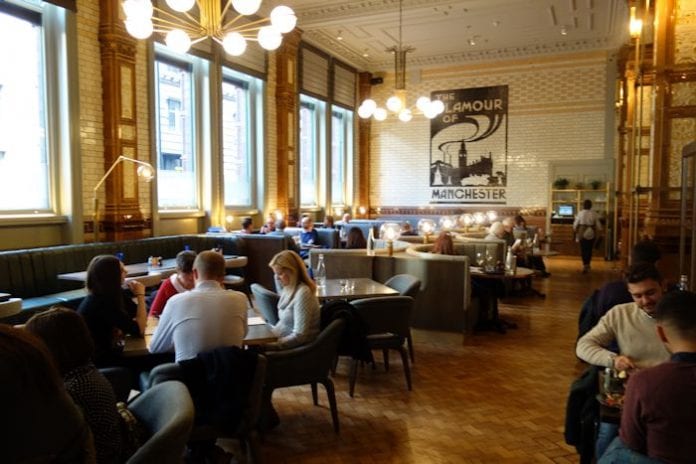 Over the past three months we have been to previews, press lunches, evening launches and the hotel rebranding party of the year, that Sunday Times Style party where Mark Ronson got us all giddy spinning a few tunes.

Time to take a step back, put all the hype aside, and see if the food served in the Dining Room at The Refuge actually matches the grandeur of the space.

We came for a late lunch on a Friday afternoon and the vast room was nearly full. The lunch menu comprises the People’s Lunch (a daily changing hearty bowl of soul food for £7.50), voltini small plates inspired by the Unabombers’ travels, and larger plates, all of which are designed for sharing. The food is inspired by many far flung destinations, refusing to be pigeon holed.

Before choosing from the ambitious and varied menu, we drank a couple of the pre-lunch cocktails. I want to say luncheon it felt so grand in there.

Pina Royale (£10) is a fruity and thirst quenching guzzler of champagne, pineapple, coconut ice and anise. We both thought it would have been better with slightly less anise as that’s quite a strong flavour and after-taste going on.

Dog vs Bee (£7) is a more refined affair, looking like something you would be served at The Savoy. The old fashioned martini glass was elegant as was the drink made from FEW white whiskey, honey, vermouth and bitters. Sophisticated but not a hurler. Just the one of these will suffice.

Crispy lamb shawarma with harissa (£8) wasn’t much of a looker but who cares when it tasted that good? The lamb itself reminiscent of a Chinese crispy duck with moist meaty bits and outside crispy bits but with the spices of the Middle East.

Gloucester Old Spot pork belly (£7) was wonderfully cooked, the lemon and fresh chimichurri needed to cut through the fat on the belly. It was lip-smackingly good.

Slow-cooked ox cheek with egg and Sriracha (£9.50) was our favourite, the stocky meaty gravy mixing with the perfectly cooked runny egg, so warming and thick on a cold afternoon.

Two massive croquettes of salt cod (£6) were very inelegantly thrown on a dish with parsley aioli, but yet again they were very good examples of this tasty tapas. Fire-roasted Padron peppers with Maldon salt (£4.50) were okay but, having tried them at El Gato Negro, they had rather a lot to live up to and weren’t quite as good.

For larger plates we tried the half roast chicken with citrus and maple (£13). Some people may think ordering chicken is boring, but when it’s this good it always makes me smile. The lovely sweet roast garlic garnish on top added bags of flavour. But why they served it with such uninspiring French fries is beyond me.

Last up, hake with black daal (£12 which would probably have been my favourite dish of the day had it not arrived lukewarm. What a shame.

Not as big a shame as the service though. And by this I do not mean our server, Emiliana. who was lovely and couldn’t be faulted.  I mean the speed of service. We ordered five voltini and two larger plates which arrived in quick succession fifteen to twenty minutes after we had placed our order.  Talk about killing the mood. Sat in this decadent dining room on a late Friday afternoon, we wanted to taste, digest, dissect and discuss. The onslaught of food meant we rammed down everything at once, savoured nothing, and didn’t really appreciate how good any of the dishes were.

We managed to hold off the kitchen for a half hour breather and finished off at a much more leisurely pace with our pear and hazelnut tarte tatin (£6.50) and white chocolate and cardamom brulee (£6.50), both of which were top notch examples of their kind.

It’s often the way that the puds don’t live up to the savoury dishes but these were actually better. The presentation and execution made them feel like the finished article whereas some of the other dishes had the teensiest bit of room for improvement, even though all the important elements were present.

The food is actually much better than I had expected and we had a near perfect lunch – apart from those little glitches with the conveyor belt style of service.

Head chef Alex Worrall and his team are definitely hitting the spot in these fantastic plates which have the Unabombers’ stamp all over them. Whoever came up with that idea got it spot on as the lads have truly stepped up to the challenge.

The ‘Come As You Are’ tagline perfectly sums up their all-encompassing mission to create a more relaxed and less formal space which still oozes glamour. 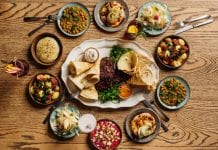 The Refuge is reopening with a new menu to celebrate special dates, occasions or... 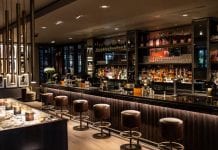