Review: The Producers at The Royal Exchange Theatre 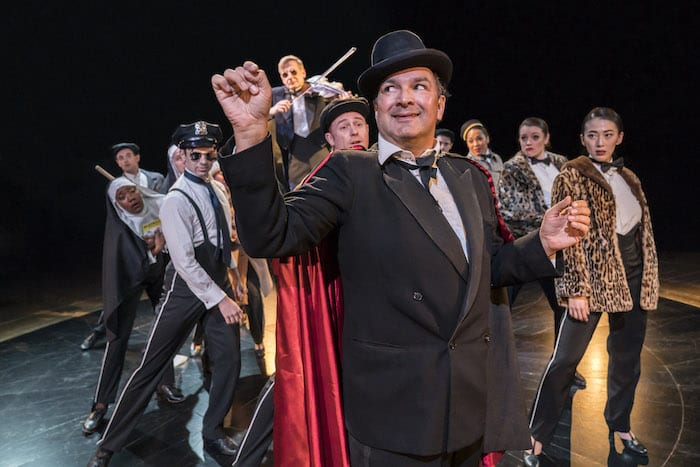 The Royal Exchange has become a go-to venue at Christmas, with a run of hits including Little Shop of Horrors, Sweet Charity and, last year, the wonderful Guys and Dolls.

The Producers might not seem the most obvious festive fare, but it is a joyful show which manages to offend, shock, and leave you with a huge fat grin on your face every two or three minutes.

Mel Brooks’ original film was celebrated on release in 1967, but it was on Broadway 17 years ago that audiences could sit and watch through their hands, as they were hit with a barrage of jokes and ferociously funny songs, all designed to make them laugh out loud, but also feel slightly awkward for doing so.

In case you don’t know the plot, Broadway producer Max Bialystock (the indefatigable Julius D’Silva) and nervy accountant Leo Bloom (the brilliant Stuart Neal) attempt to stage the worst musical of all time in order to make as much cash as quickly as possible by having it close in record time. Cue the awfulness that is the song and dance number Springtime for Hitler in the show within the show of the same name.

There are so many funny moments in this excellent Christmas cracker that is difficult to recall them all, without returning for a repeat viewing, which I highly recommend.

Director Raz Shaw embraces the material he is working with and he has the upmost respect for Mel Brooks’ original production and film. But, he also manages to do something slightly different with it, mainly because this is staged in the round which is no mean feat.

The circular stage suits the show and gives it a bit of sparkle and fits like a sequined glove. The cast members are constantly looking up at the audience and dancing around the sometimes-revolving stage, which means there isn’t a bad seat in the house.

And during the deliberately embarrassing car crash song that is Springtime, it means that set designer Ben Stones can have a field day with a variety of brilliantly designed props which are carried onto the stage at speed. I don’t want to ruin anything but let’s just say some of the hats would look at home at a Trump rally.

If you remember the film version, you will know that pigeons play a pivotal part, and here they are designed with such detail that one of them has a wig on. It is little moments like this that win you over as this production has been made with so much love and humour that is hard to resist.

Some will balk at the many cartoonish representations on display, including effeminate men, goose stepping dancers, a sex mad Swede, a pigeon fancier who admires Hitler, and lots of Jewish stereotypes. But the main target here is Hitler himself. Everyone else is celebrated for the fact that they are different, and you end up loving them all.

Julius D’Silva and Stuart Neal make a remarkable double act. It feels as if they have known each other for years and have energy to burn. They are never off stage and have as much fun as you will.

Emily-Mae plays Ulla, the sweet but dim (or is she?) assistant who has both men falling for her. She is sex mad but is played here as a Broadway bombshell and buries any bad memories left by the #MeToo campaign, as she is in control.

Charles Brunton (Roger De Bris) and Hammed Animashaun (Carmen Ghia) have a song called Keep it Gay and that’s exactly what they do with glee and a real sense of defiance and indifference. And Dale Meeks hams it up as Franz Liebkind and has a ball.

Everything about this show is perfection personified, from the brilliant set design, the staging, the performances, the choreography, through to the interaction with the audience.

The cast work incredibly hard and the ensemble are all astonishing, as they must change costumes at speed, and run back on and deliver another highly energetic number.

Ulla sings a great song called When You’ve Got It, Flaunt it. Raz Shaw has got it 100% right with this riotous revival which revels in the magic and pizazz of Broadway.

The Producers is at the The Royal Exchange Theatre until 3rd February 2019.