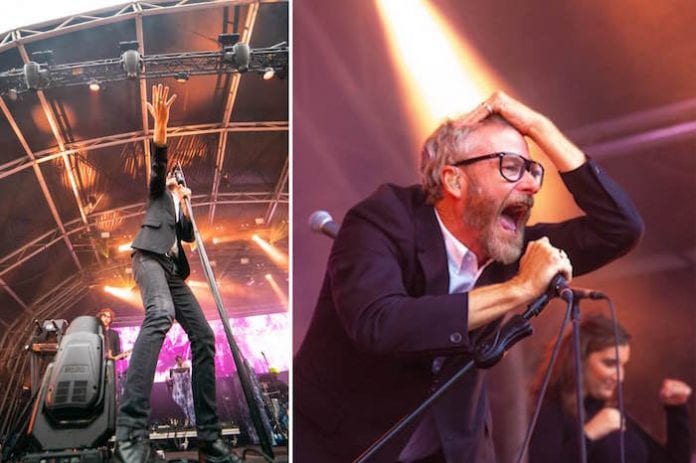 It’s no mean feat for an American indie rock band to be entering the ’10s with a higher stock than they had in the ’00s. But, somehow, The National have managed to pull it off.

Last night, thousands of fans packed into Castlefield Bowl to watch the ex-Brooklynites’ performance: a two-hour epic set which fused time-worn favourites with soon-to-be hits from the band’s form-breaking eighth album I Am Easy To Find.

Before they took to the stage, a tongue-in-cheek blasting of Johnny Mathis’ 1964 hit A Great Night For Crying rang out across the amphitheatre, setting the evening’s tone – just in case anyone was in doubt about their ability to laugh at their own emo credentials.

You see, to be a fan of The National, you really need to be a fan of lead singer Matt Berninger – a man with an incredible knack for taking listeners’ most bitter insecurities and, somehow, transforming them into anthemic hits that almost sound like a brag.

It’s not hard to fall in love with his gravelly baritone purr of a voice. But, for some at least, his self-loathing lyrical style – a catastrophising mixture of romantic endurance, narcissistic neuroses and self-criticism – has proven too much to endure over the past two decades.

Hence, perhaps, the band’s break in tradition with their latest release I Am Easy To Find,  which is notable for its sudden influx of female voices. The influence of Berninger’s wife Carin, who has co-writing credits on several songs, is palpable.

This feminist angle is a new look for the very white, very male band who was joined on stage by guest vocalists Pauline de Lassus (Mina Tindle), Gail-Ann Dorsey (best known for her lengthy residency in David Bowie’s band), and Kate Stables.

Throughout the course of the show, their vocals offer up a fresh perspective, injecting commentary and, at times, adding notes of dissent that in places push the band’s debonair frontman into silence.

Kicking off with the new album’s opening track You Had Your Soul With You, dizzying guitar runs and lofty strings combine with Gail-Ann Dorsey’s honeyed vocals to deliver an opener than veers away from Berninger’s typically dour commentary on love and loss, offering up a refreshing glimmer of hope instead.

It’s swiftly followed by a string of new album tracks, as they rip through Quiet Night, The Pull Of You and Hey Rosey. But despite the warm swell of luscious female voices, it’s not until they drop 2013 hit Don’t Swallow The Cap (introduced by Berninger with a very dad-esque crap joke) that the fans really start to get excited.

A long lingering guitar solo follows, its magnificence only slightly dampened by the Bowl’s somewhat flat acoustics, before the band launch into Bloodbuzz Ohio with the relish of a group anxious for their fans’ approval and aware that this is the song to deliver it.

Next up is another new one – the dreamy Oblivions. A featherlight back and forth between Berninger and Pauline de Lassus ensues, and we sway, dutifully and peacefully. The trance, however, is broken as a commotion ensues near the very front of the stage and a couple are pulled out over the barriers, the woman in tears.

“Don’t push each other around. Don’t be dicks,” crows Berninger authoritatively, before adding jokingly “I’m mostly talking to me and Bryan.”

As we near the halfway point of the set, the band pulls out a golden ace with 2005 hit All The Wine and, suddenly, we’re putty in their hands again. They drop the intro for Day I Die – taken from their Grammy-winning 2017 album Sleep Well Beast, which also earnt them their first number one – and a roar of approval ripples across the Bowl.

Soon after, Berninger leads us into The System Only Dreams In Total Darkness and the atmosphere reaches a euphoric pitch as thousands join in to sing the chorus with him in unison.

There’s a lull as they go through the motions on Hairpin Turns – one of the new album’s more boring tracks – followed by shouts of ‘yes!’ as Graceless drops.

The new album is considerably less political than their previous work, so we are pleased to hear Fake Empire, famously championed by Barack Obama who used it as one of his election campaign songs.

For the encore, we’re treated first to a Beringer special with Not In Kansas. It’s a witty stream of consciousness detailing man’s demise concludes with a no-holds-barred dissection of our impending climate apocalypse as he sings: “If the sadness of life makes you tired / And the failures of man make you sigh / You can look to the time soon arriving / When this noble experiment winds down and calls it a day.”

As they move into Mr November, the rain really starts to come down and it feels like pathetic fallacy as Matt roars “I won’t fuck us over, I’m Mr. November” over and over again in anguish.

Next, an impeccable segway transitions them into Terrible Love. Then the lights come on and the sound cuts out. But the band aren’t done.

And so, defiantly, they complete their last song – Vanderlyle Crybaby Geeks – completely acapella, with just the beat of a tambourine for percussion and a few solo trumpet riffs padding it out.

The rain is pouring by now, but the crowd don’t care. We’re all singing along too, and it feels incredibly powerful.

You Had Your Soul With You

The Pull Of You

So Far So Fast

Where Is Her Head

The System Only Dreams In Total Darkness

I Am Easy To Find