Review: The Girl On The Train at The Lowry

The Girl On The Train began life as Paula Hawkins’ best-selling book and was quickly turned into a film starring Emily Blunt as the ‘commuter’ who sees her own idealised vision of perfection from her train window. She wonders about the lives of a couple that she repeatedly sees.

The film version moved events from the UK to America. Because Rachel Watson, the lead character played here by Samantha Womack, is British and a drinker, she blurs into the background on a train journey, because how many times do you see people drinking on trains here? In America, she would stand out like a sore thumb, so the film did not work as well as the book, despite a committed turn by Blunt.

Anthony Banks’ stage production returns to its original UK setting and it works, mainly because of the confidence of lead actor Samantha Womack, who plays Rachel with a genuine sense of confusion, never playing the wobbly stereotypical falling-down drunk. She plays a woman so used to being inebriated that it becomes normal.

Rachel sees perfection on her train journeys. It reminds us all of our very own train window – our social networks with filtered photographs and posed snaps, which only show us other people’s greatest hits or the conflict that we witness on a daily basis between remainers and brexiteers. 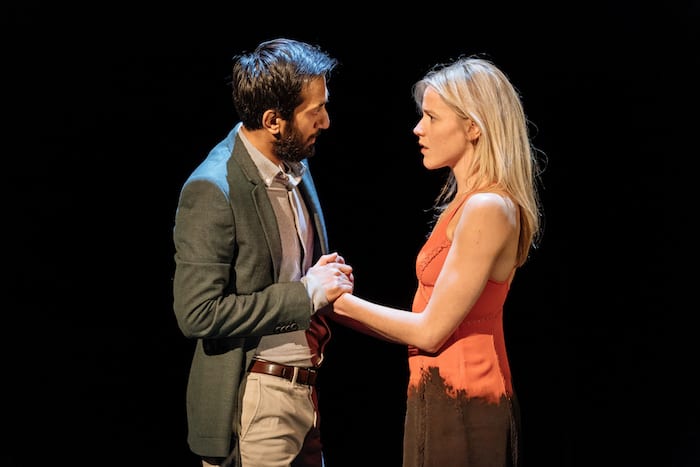 The apple of Rachel’s eyes are a young couple, Scott (Oliver Farnworth) and Megan (Kirsty Oswald). She builds up a narrative of how these two live their lives whilst never quite getting over the breakdown of her relationship with Tom (John Dougall) who has moved on and now lives with his wife and new-born baby.

Once Megan goes missing, Rachel’s life begins to spiral even further out of control. The intrigue comes thick and fast, and the audience begin to work out what happened to this young woman, with the finger firmly pointed at Rachel, who never remembers what she has done, thanks to her Waitrose drinking habit.

Samantha Womack holds your attention throughout, as she has done previously in Harold Pinter’s Betrayal, South Pacific, and The Addams Family (also at The Lowry). There is something magnetic about her here, because she makes a deeply flawed character feel very sympathetic, even when her behaviour feels quite wrong. 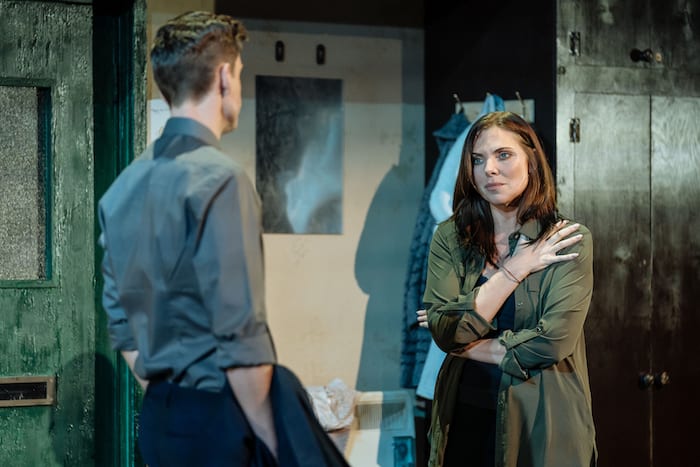 Oliver Farnworth delivers a fine turn as the anguished and confused Scott, who has a few secrets himself. John Dougall is great as the frazzled and sardonic D.I Gaskill who Rachel hounds daily, and Kirsty Oswald is wonderful as missing Megan, who we see in flashback.

Adam Jackson-Smith as Tom, is torn between his drunken ex and his new life and love, Anna (played with a real sense of loyalty by Lowenna Melrose) and does well, particularly in his scenes with Womack.

Although the source material for this play was always schlocky and soapy, you couldn’t put the book down because you longed to find out whodunit. On stage, this is ramped up through the use of music and Andrzej Goulding’s projections of the train and other inventive effects, including the inner workings of Rachel’s muddled mind.

There are many scenes involving characters talking about what might have happened, and these would benefit from being replaced with something more dramatic, as it starts to become very samey after a while.

But, for the most part, The Girl On The Train is a thrilling ride and, unlike many journeys on public transport, you get from A to B really quickly. It may be a bumpy ride but it is a very enjoyable one thanks in no small part to Samantha Womack.

The Girl On The Train is at The Lowry until 6th April. 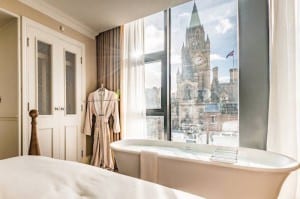 Getting married in Manchester in 2019? Five of the best wedding fairs and venue open days for couples 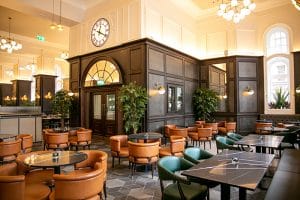 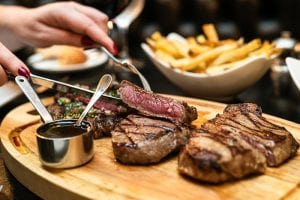 Unlimited steak, chips and wine at Gaucho – this is what Sundays were made for