Review: The Curious Incident of the Dog in the Night-Time at The Lowry

You could be forgiven for thinking that a book about a young man with behavioural difficulties and his search for the person who killed a neighbour’s dog might not be the most entertaining subject for a play.

But this is no ordinary book. It’s Mark Haddon’s best-selling novel The Curious Incident of the Dog in the Night-Time which has won seventeen literary prizes, including the Whitbread Award.

And this is no ordinary play. It’s the National Theatre’s acclaimed production of the play of the same name, adapted from the book by Olivier Award-winning playwright Simon Stephens and directed by Olivier and Tony Award-winning director Marianne Elliott.

It’s on a 25-city tour and is back at The Lowry where it was performed two years ago.

In case you’re one of the few people who hasn’t read the book or doesn’t know the story, it’s about Christopher Boone, a fifteen year old boy with an extraordinary brain, who is exceptional at maths but struggles to interpret everyday life.

He has never ventured alone beyond the end of his road, hates being touched and distrusts strangers.  But his detective work, forbidden by his father, takes him on a journey that turns his world upside down.

His highly logical, mathematical mind contrasts with the often weak, emotionally unstable actions of so many of the adults in his life. Lies. Adultery. Neglect.

Despite the serious subject matter, the play avoids sentimentality and there are some very funny moments, too, based on Christopher’s too literal understanding of what people say to him.

With so many awards, accolades and talented individuals involved in the production, you might expect it to be something special. It is.

It would be unfair to single out aspects of this magnificent production for praise, but we will anyway. 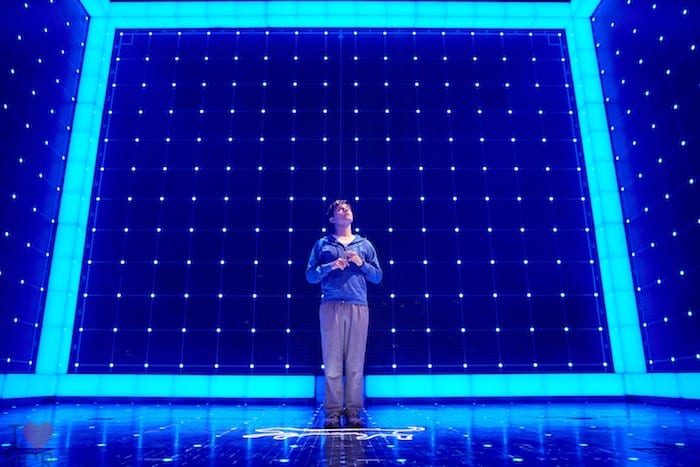 Probably the star of the show is the magnificent set with its graph paper walls, steeped in light and sound – 11.6 million pixels of projection to be exact – reflecting Christopher’s turbulent inner world.

The members of the excellent ensemble cast drive the drama forward through some memorable scenes – the astronaut scene in particular – with Glasgow-born Scott Reid, currently appearing in BBC1 comedy Still Game, deserving special mention for his performance in the central role of Christopher.

The play may have won multiple awards and be critically acclaimed but perhaps the ultimate accolade is that, even with lots of school groups in the audience, it was so quiet in the theatre you could hear a pin drop. No doubt Christopher would disagree. After all, it’s impossible to hear a pin drop.