Review: The Color Purple at The Lowry “a stage filled with talent” 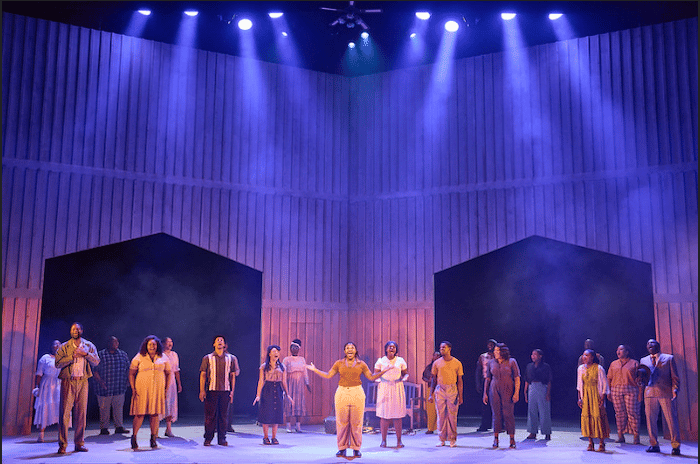 Alice Walker’s The Color Purple is such a beautiful and life affirming novel, that many readers have read it countless times. It is a book that you can return to because the themes of abuse, coming out, racial inequality and feminism are so rich and relevant, that you can view them through a different prism each time you put your bookmark back at the beginning again.

In 1985 Steven Spielberg released an epic film version and even though sections of the story were sanitised and there was way too much saccharine, it remains a beautiful film filled with brilliant Oscar worthy performances, including Whoopi Goldberg, Danny Glover and Oprah Winfrey. It was nominated for eleven Academy Awards in total and yet inexplicably went home on the night with none.

This Leicester Curve and Birmingham Hippodrome musical production was originally staged PC (pre-Covid) and reemerged as a streaming concert version, whilst we waited for theatres to reopen. It now arrives at the Lowry, with audiences ready to see the characters of Celie, Shug Avery, Sofia and Squeak stand up and be counted.

The Color Purple follows 40 years of the tumultuous life of Celie Harris – a Southern black woman. She represents what many African American women faced during the early 20th Century including; racism, domestic violence, incest, poverty and a lack of a voice or any status within society. Celie is invisible, handpicked as a wife because her sister Nettie leaves and fulfills her dream of becoming a teacher. Celie is left behind to live with the cruel and abusive man, known as Mister.

She lives a life of servitude, loyalty through fear and has nothing to look forward to until the arrival of two powerful women; the singer Shug Avery – who Mister adores and Sofia – a woman who is unafraid to fight back – with her fists.

The book and film deal with some dark themes and parts of history which are not easy to convey in musical form. But director Tinuke Craig does not shy away from these moments but you see them as life lessons to make the characters even more determined to get out, stand up and grab each positive moment that is going to come their way. This is a show filled with optimism.

Alex Lowde’s set design is tall and encompassing and the wooden barn like structure works well when you see Celie working long days and feeling trapped. The video projections bring colour into the protagonist’s life when she most needs them. But a more varied backdrop is needed to highlight the changes that the character goes through and to offer the audience more light and shade.

Brenda Russell, Allee Willis and Stephen Bray’s music and songs and a gospel feel to them and they are filled with soul. There is something life affirming at play here and each time a song is belted out by one of these talented cast members, you get the feeling that a change is gonna come.

Me’sha Bryan is wide eyed and filled with optimism at the beginning of Celie’s story and she ages before your very eyes, through her excellent use of body language. When she sings, you sit up and take notice, as she is Celie’s inner voice.

I have always wanted more of Sofia’s story in this musical, as there are interesting developments that this character goes through. She is silenced but she remains determined and Anelisa Lamola conveys this beautifully and does more with the character than we see on the page.

Aaliyah Zhané is pitch perfect as Nettie, Celie’s sister who escapes but never forgets her sibling and writes to her every day with tales from Africa.

Ako Mitchell plays Mister with so many layers and depth that you view him as cruel and relentless in his quest to belittle others, but he does not like himself and Mitchell conveys his flaws, alongside his  humanity. 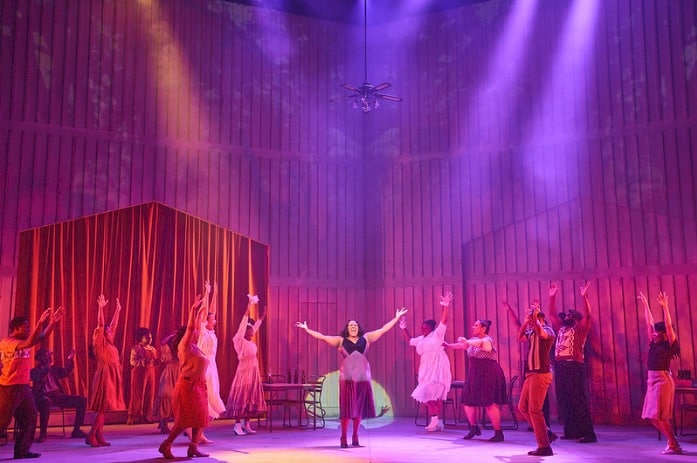 Bree Smith shone in Ancoats at the Hope Mill’s production of The Wiz last Christmas. Here, she shines even brighter and owns the stage as Shug Avery, the love of Mister and Celie’s life – she is the one thing that connects them and this brilliant performer’s vocals are pure gold.

The supporting cast and swings excel themselves and during the church scenes, they take you somewhere else with their heavenly vocal ability and highlight how theatre really does give you respite from the current diet of bad news.

Marsha Norman’s book brings out new and interesting developments from the source material and cuts out other moments that many may long for, including some of Sofia’s story arc. But there is still enough here to please readers of the novel and fans of the film.

For newcomers and allcomers, there will be delight at seeing a group of African American women who were determined not to remain hidden figures and because this is musical, the show offers them a voice and the cast exemplify how thrilling it is to see a stage filled with talent.

With The Woman King wowing audiences in the name of representation in cinemas, The Color Purple does the same – but none of this is the box ticking that cynics claim it is – it provides audience members with a chance to see themselves on stage and in film, not stood at the back or waiting in the wings, they are the stars of the show and they all glow and put a spotlight on the past, in order to move forward within the present.

The Color Purple is at the Lowry until 15th October and can be booked here.