Take a trip to Thailand, without leaving Spinningfields... 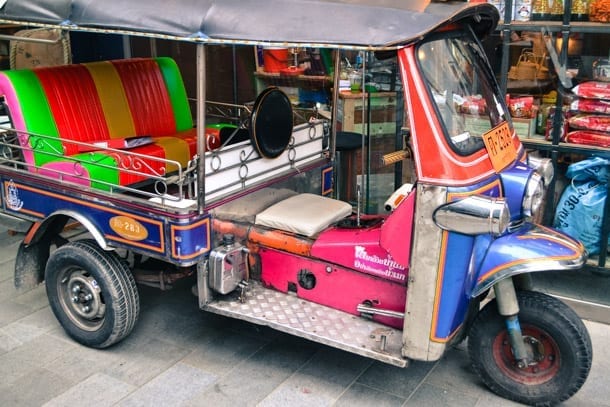 Can Spinningfields get any more cosmopolitan? It certainly feels the most vibrant district in Manchester right now…

Thai food has well and truly established itself as a favourite with many across the U.K. and it looks set to stay. The increased popularity probably stems from college leavers, who make the trip to South­East Asia on their gap year (unfortunately I was not one of them). Or generally anyone who’s seen the film ‘The Beech’ starring Leonardo DiCaprio.

Thaikhun is the louder, younger sister of the finer dining and ambient Chaophraya, looking to offer Thai street food, inspired by vendors in Bangkok and celebrating their successful food businesses.

A tuk tuk and bicycles propped outside the restaurant give you a hint of the authenticity you’re greeted with on the inside. Once you step in Thaikhun you’re bombarded by a hotchpotch of mementos, which would remind many of their Thai holidays. With street market furniture and an array of lanterns giving the place a vibrant feel, with music beating through the joint, which would get you pumped up for a full moon party (or the Mancunian equivalent).

Once sat down your first feeling is to grab a cocktail to match the mood and that’s exactly what we did. The Full Moon (£6.50), spiked with vodka and triple sec, topped up with refreshing watermelon and cranberry was an absolute treat. Good Time Girl (£7.95) was a favourite with my other half, with sweet vanilla vodka and butterscotch, partnered with fresh, punchy pineapple juice was a good way to start the evening. 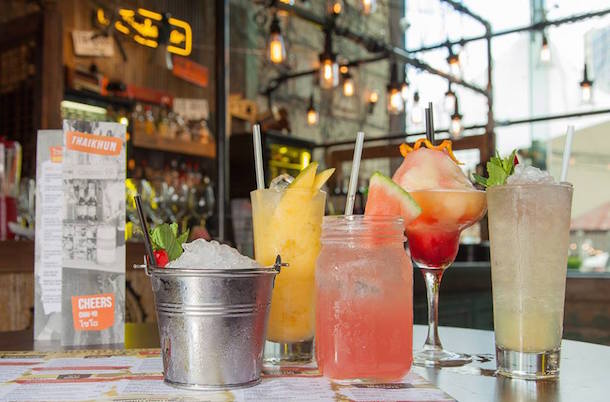 Whilst munching away on prawn crackers with lip­smackingly hot sweet chilli sauce, we had a gander at the food menu. The usual Thai curries, stir­fries, soups and salads took their place, with a Thaikun twist. But the defining difference was in their ‘Street Bites’ section, which offers more hands on, street style food.

We opted for the Bangkok Street Platter (£5.25 per person), which included a tantalising array of bits and bobs. The succulent grilled chicken and pork skewers and crisp wontons were certainly the favourites, with an assortment of Thai­style dips replicating the famous hot, sour, sweet and salty flavours that this region is renowned for. 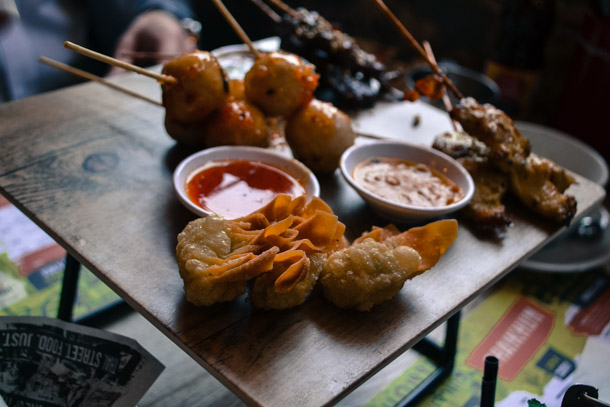 With that polished off, we awaited our main courses. I opted for a more classic dish, which has taken the U.K. by storm in recent years­ Gang Dang Nua (£9.95) or more simply Thai red beef curry. The thin slices of beef are simmered with bamboo shoots in a mildly spiced red curry sauce. The coconut milk swirled into the dish rounded it all off, making the sauce rich and decadent. Topped with red chillies and fragrant, yet sweet basil, it was a joy to eat. For those who like it a bit hotter (like myself) there are chilli flakes and chilli paste (Resembling Malaysian Sambal or Thai Sriracha hot sauce) at the table, which certainly added an extra dimension to an already marvelous main. 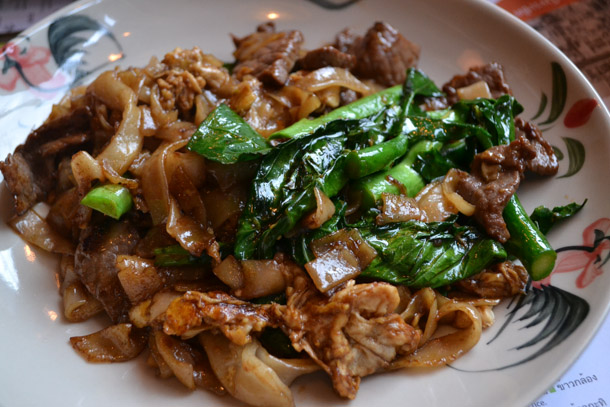 My wife opted for the Moo Prik Ging (£8.95) or more simply, twice cooked crispy pork belly­ stir fried with red curry sauce. The pork belly itself had been treated with respect whilst cooking, as it fell apart once you touched it with a chopstick. Salty, smoky, packed with umami and basted in spice from the red curry paste, it was incredibly moreish. Freshness and crunch was added with the green beans and slices of extra red chilli added another layer of heat.

I couldn’t go home without sampling the Kluay Khuek (£4.25)­Thai Banana Fritters with Ice Cream. Bananas coated in light, crunchy batter and served with heavily infused vanilla ice cream, whipped cream and a drizzle of chocolate, this was the kind of dessert you could imagine in an American café, just down to its sheer size, but this was a lot more clever. A simple slice of lemon under the ice cream added zing and freshness to cut through an incredibly sweet and indulgent dish. 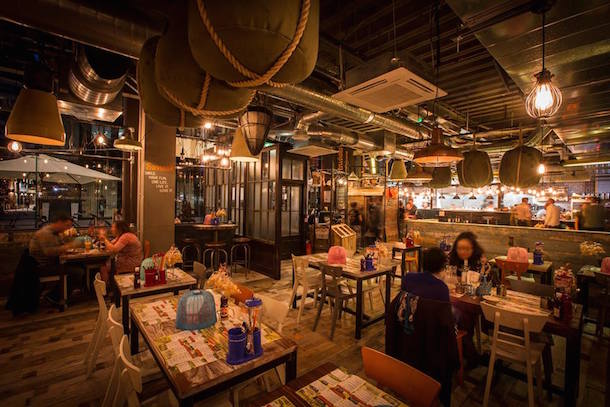 With the bill only coming to £65 you could certainly see why Thaikhun, only nearly a year after opening its doors, has established itself as a favourite in Spinningfields and Manchester. With another successful site in Aberdeen, and two other sites poised to open in Cambridge and Oxford, it is certainly a venture that is looking to branch out and explode across the U.K.

The recently updated Thaikhun app pings offers and alerts your way whilst you walk past the restaurant ­and loyalty stamps which reward customers with 40% off your bill after six visits – it’s a place looking to give something back to it’s biggest fans. To download: visit the App Store or text 64446.

With new food and cocktail menus expected next week to gear up for the busy bank holiday and summer months ahead, it’s certainly somewhere I can imagine savouring a cocktail or four whilst sitting on their outdoor terrace until the twilight hours.

Take a culinary trip to Thailand, without leaving Spinningfields…