They aim to produce with new and emerging writers, directors and actors, and this is really welcome at a time when stages are filled with revivals and productions we have all seen many times before in order to secure ticket sales following the shutdown of theatres.

This passionate group of young people have teamed up with 53two as their resident Next Generation Artists. So for many theatregoers, this will be their first chance to see this adaptable new space.

Switch_Mcr are currently performing two plays on the same bill, and they are complete opposites. 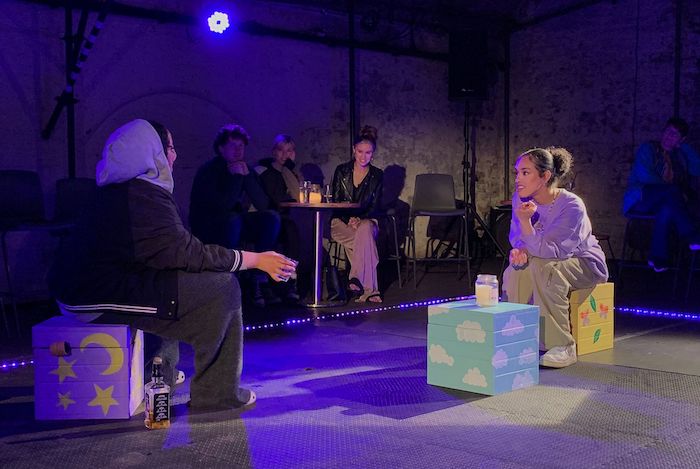 Senses of Responsibility follows a young teenage girl called Symonie (played with genuine compassion by Hope Yolanda) who has been forced to grow up fast.

She is a carer for her mum and this is not common knowledge to teachers and friends.

And because of the fact that she is carrying out this role, round the clock, she does not have time to meet or make many friends.

Whilst they attend parties, she is supporting her mum and essentially becoming the parent in the relationship.

Mum has a genetic condition and her daughter is on a tightrope, navigating her way through teenage life, school and making decisions about her future, supporting her mother and deciding whether or not to get tested herself.

The brilliant Lowry production Who Cares? recently explored the thoughts and feelings of young carers and the fact that they are almost ‘invisible.’

So if they are lucky enough to get support, they are not best equipped to accept it, as this becomes a state of being; it is who they are. 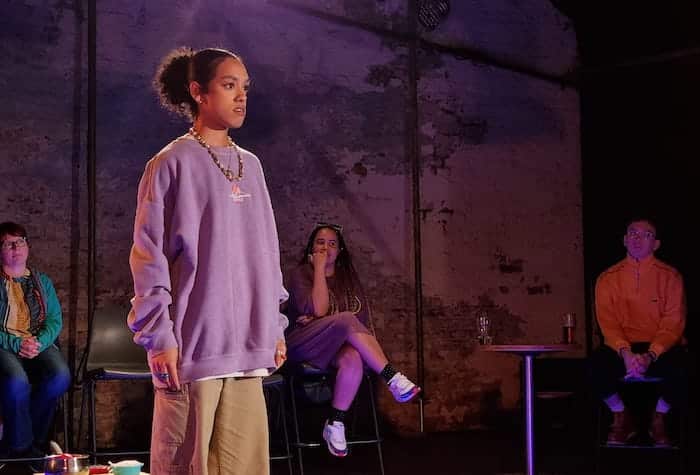 Writer Lekhani Chirwa and director Nadia Emam explores this really well by having Symonie address the audience as if we are in her support group.

So we get two versions of her, a calm mask wearer who is used to ‘acting’ as if everything is fine, mixed with anger, frustration and loneliness.

As soon as someone offers help, she becomes a hot boiling saucepan filled with water, about to spill over.

Hope Yolanda has great stage presence and captures the essence of this character incredibly well and never fails to engage the audience, often having to make direct eye contact with you, in 53two’s beautiful new theatre space.

Sara Abanur plays a variety a roles and delivers with panache and is able to switch accents/tones, body language and mannerisms at the literal drop of a hat.

Her male date for Symonie is brilliantly observed, as this guy has no time for anyone but himself but she manages to find the comedy in that awkward situation.

Lekhani Chirwa’s writing is authentic and heartfelt and manages to be both moving and funny. There are times when a metaphor or another flourish would allow the piece to sing more loudly and give it a poetic quality.

But this remains a great two hander which really allows these two actors to shine, whilst at the same time putting a spotlight on invisible young people who have no voice in society. 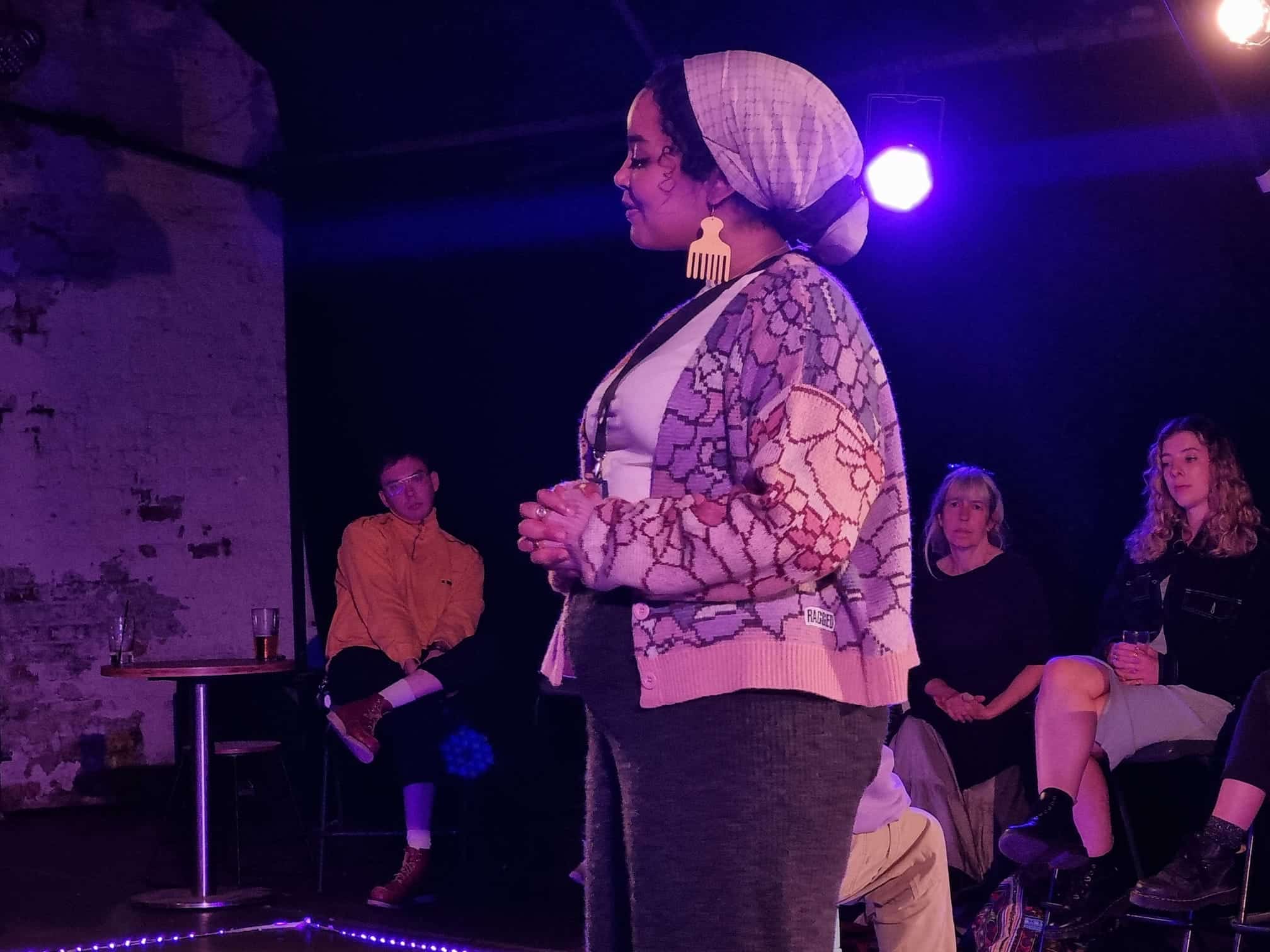 The second play Blue Moss, written and directed by Joseph Conway, is harder to sell but it does contain some great performances, too.

As the title suggests, it takes place in the overgrowth and we follow three characters who are dealing with loneliness and the sense that they are trapped.

The great thing about this play, is that even though it is at times, quite abstract and verging into the absurd world that Harold Pinter or Samuel Beckett often give us, you can make links between this dystopian world and the effects of Covid.

The three young actors really ‘sell’ this one and often bring far more than is on the page.

Spike De La Cruz has an ability to utter a one liner like an old school female movie star. They know the best way to get a laugh is to wait and pause and they have great comic timing.

Laura Masters has an ethereal quality about her performance, she glides across the stage and has energy to burn. 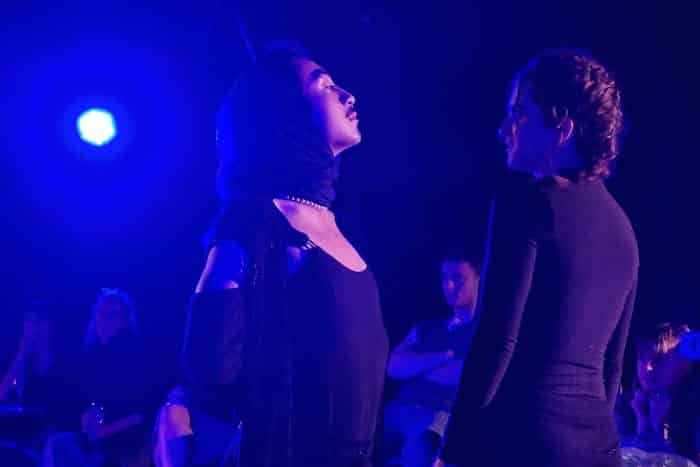 Blue Moss is over ambitious for a short play and tries to do and say too much and has so many pauses and moments of repetition and is so wordy that at times, it is easy to get lost.

There are elements such as a brilliant debate on gender which could be expanded and other elements featuring dialogue driven scenes which go on way too long. So your mind does tend to drift.

But the one thing that keeps you coming back for more, is these three talented actors.

Grainne Flynn’s marvellous movement reminds you how a play without words can express so much, and I would have loved more of this.

Based on the sheer variety within this double bill and the gifted performers, Switch_Mcr Theatre Company’s plays are worth checking out.

Senses of Responsibility/Blue Moss is at 53two until 9th July and can be booked here.