Gene Kelly’s energetic and breathtaking turn in the classic MGM film Singin’ in the Rain (which he also directed) is ingrained in my memory, and has been filed under ‘feelgood’ since I first saw it as a child.

It is fondly remembered for that sequence featuring the title song, gallons of water and Kelly’s incredible choreography.

If you are a fan of the film, there are so many other great scenes and sequences alongside this, and it is essentially a musical rom-com.

It is also a celebration of cinema, as we follow silent movie stars Don Lockwood (Adam Cooper) and Lina Lamont (Jenny Gayner) – Hollywood sweethearts and their quest to stay on top. 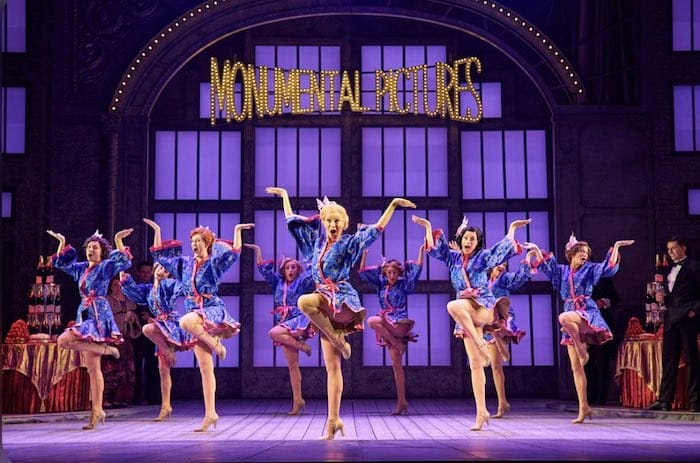 Enter the arrival of the talking picture following the advent of sound, and Don and Lina suddenly look like yesterday’s heroes.

There is also the added complication that Lina’s own voice is the equivalent of hearing Boris Johnson apologise on repeat; it annoys and grates.

Step forward Kathy Selden (Charlotte Gooch) – a chorus girl looking for a new gig. With the help of Don’s sidekick, Cosmo (Ross McClaren), they attempt to resurrect the careers of these fading stars and keep their names in lights.

The film encountered many problems when it was made in 1951, including Kelly’s quest for perfection resulting in him performing the iconic title song sequence with a raging fever and co-star Debbie Reynolds suffering with bleeding feet, following the 14-hour shoot that ended up as Good Morning.

Jonathan Church’s stage production has been on tour before and the West End, and I have seen it twice previously. Yet, it does not appear tired, half hearted or a lesser version. In fact, the opposite is true.

Some audience members on the night I attended openly voiced the fact that this is the first or second time they have been to the theatre since the pandemic forced venues to close.

They could not have picked a better show, as you do fall back in love with both theatre and cinema, as this fantastic musical celebrates the relationship between performers and an audience seeking escapism.

Simon Higlett’s adaptable and vast set design recalls the Golden Age of Hollywood, when movie stars were kings and queens, and the costumes take you back to the age of technicolor – and this is a sight for sore eyes when our daily diet of news seems so black and white.

Everything about this marvellous musical puts a huge smile on your face, from the physical comedy of Ross McLaren in the wonderful Make ‘em Laugh sequence (which takes your breath away), the cute chemistry between Adam Cooper and Charlotte Gooch as their characters navigate the rocky road that is romance, and Jenny Gayner’s delightful turn as the kooky fading star Lina Lamont. 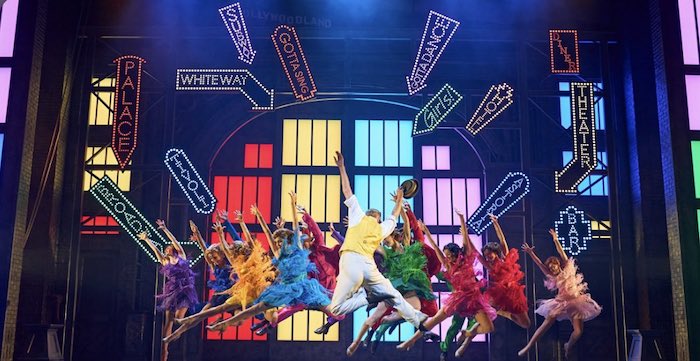 Andrew Wright’s choreography gives each member of the ensemble and supporting cast a chance to show the adoring audience what they are made of and they do just that.

Harriet Samuel-Gray is graceful and athletic as a Broadway Melody Girl in a superb song and dance sequence which is a confection of colour and exuberance and it is stunning.

Every time Adam Cooper sings Gotta Dance, you want to do just that and join them.

Sandra Dickinson returns to the role of Dora Bailey, an entertainment reporter who uses hyperbole to excite and persuade the audience at home to visit their local fleapits and see these stars shine on the big screen.

She enjoys playing this role and it shows, as she is a real pro.

As for the sequence that everyone remembers (and I mean everyone, as it has been reinvented on everything from Britain’s Got Talent via George Sampson  through to a Volkswagen commercial), on stage it fills you with joy.

Adam Cooper glides across the stage as if he is walking on air, and his ballet training comes to the fore.

Kicking water playfully into the stalls, giving people in the splash zone at the front a giggle, he proves he has the power to tell a story through dance, but that he is a good vocalist too.

Charlotte Gooch is a wonderful dancer and her smooth and crisp vocals and effortless acting mean that she is a triple threat.

Ross McClaren brings an upbeat energy to the show and whenever he is on stage, you cannot help but grin.

Lastly, Jenny Gayner brings something likeable to her Lina Lamont, who is used by a star system which no longer wants her.

If the Manchester rain sometimes gets you down – but, like me, sometimes you kick the water from a puddle in an attempt to recreate this iconic scene and end up soaking your jeans with dirty water – then I recommend you get yourself to the Opera House.

As I left the venue, I had a huge smile on my face as I hummed (join in if you know it!) Doo-dloo-doo… and I was left with a glorious feeling that excellent live musical theatre can bring you.

Enjoy, and soak it up!

Singin’ in the Rain is at the Opera House until 14th May.