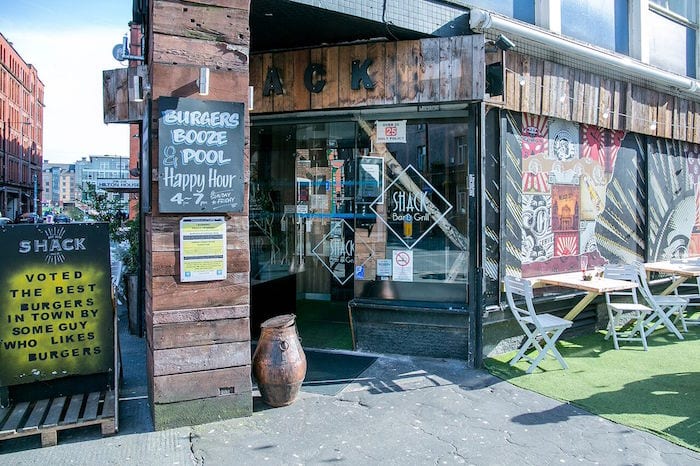 I’ve wandered past Shack on a number of occasions but have never ventured inside. There’s a beer garden outside complete with astro-turf and plenty of benches giving it the feel of a garden shed.

The interior, quite large for the area, has plenty of seating with comfy booths and personal TV screens, along with pool tables, pics of Manc pop royalty and a huge central bar.

It has less of the feel of the shabby outside, and more the feel of a rough round the edges but cool travellers bar you stumble across on your jollies. I like the fact the televised sport isn’t in your face. The volume is turned down so you don’t have to watch the Olympics, or whatever is on, if like me you’re not a sports fan and you don’t want to watch.

What I liked even more was the soundtrack – cool and chilled acoustic classics. Spot on for an hour or two away from the office.

We ordered drinks to get us started as we looked through the menu with an extensive grill section and very American-inspired content. Both drinks were fantastic. My daughter’s Kinda Fun Milkshake (£5) would have set most of us up for the day. A larger than life and completely over the top sundae of a milkshake that she loved and that I helped myself to in equal measure, the toasted marshmallows causing an argument as to who would get the last one!

My Smokey Old Fashioned (£8) came minus the smoke due to an out-of-action smoking machine, but it didn’t matter. Woodford Reserve bourbon delightfully stirred with maple syrup and orange bitters. Rather good, I must say. 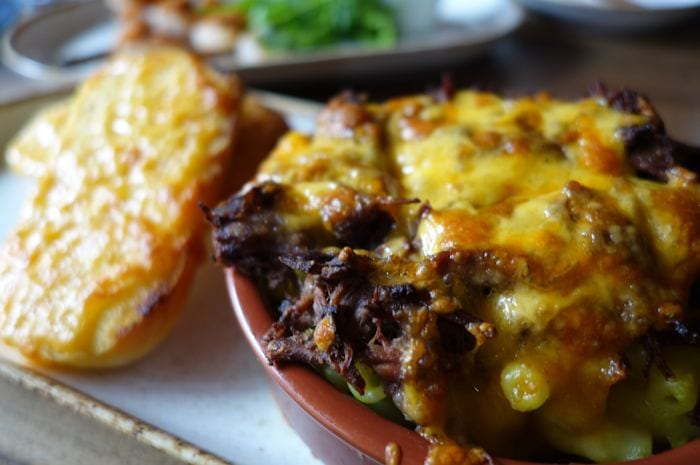 Less successful was the Casa Rivas Sauvignon Blanc (£4 175ml), not the best example of this grape variety, a bit sour and not the easiest drinking with my starter. My Mac ‘N’ Cheese (£5) came loaded with beef brisket (an extra £2) and cheesy garlic bread. The bread was naughty, like something you’d gobble up at home in front of the telly and lovely for it, although the macaroni needed to be naughtier. It was cooked well, and tasted fine, but just needed more sauce and cheese. Pan Fried King Prawns (£7) were overpriced for the quality of the prawns and the portion size, with some lame undressed rocket thrown on as a garnish. This one could really be improved on. 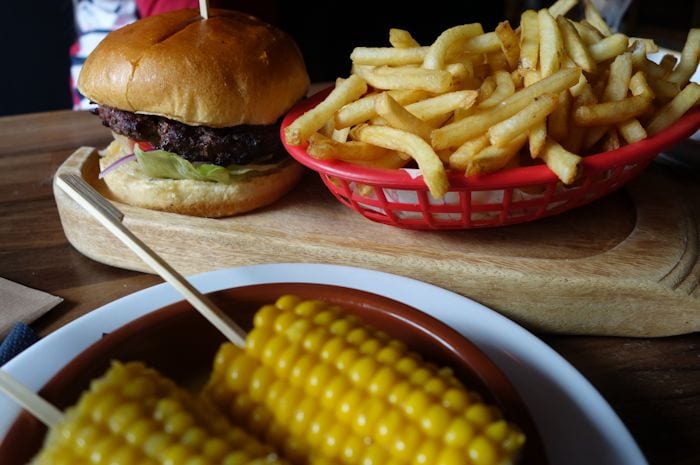 The burgers here have won awards so we ordered one. This is where they did really well.My daughter ordered the Simple Burger (£7) with Skin On Fries (£3) and Baby Corn On The Cob (£3) for her main course (Shack have a separate, well priced kids menu.)  A properly cooked 100% beef patty with no frills, in a fresh brioche bun – exactly as my little one loves it. There are four variations for anyone wanting to customise theirs. 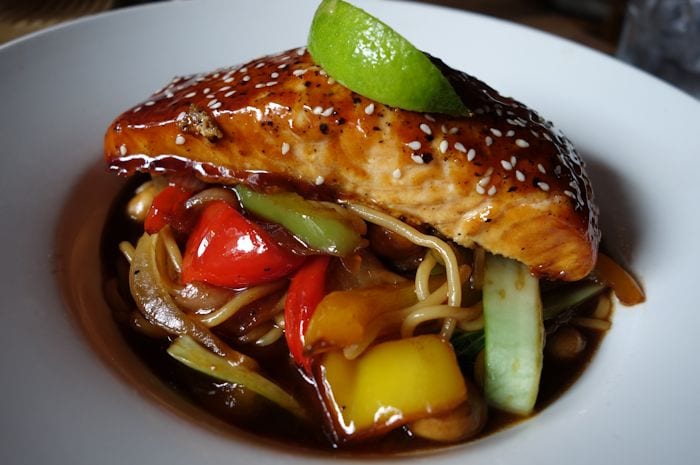 My main was Salmon Teriyaki Noodles (£13) as I wanted to try some fish cooked on their charcoal grill. The salmon itself was delicious, with a lovely sticky glaze, but the noodles were too heavy, reminiscent of a sweet and sour dish from your local Chinese.

I was pleasantly surprised by Shack. Owner Debbie and manager Kane really care about their product and they looked after us like we were sat in their home. It wasn’t perfect, but for a bar in the ever increasing pool of bars in The Northern Quarter, it definitely has legs. It also just goes to show you shouldn’t judge a book by its cover.