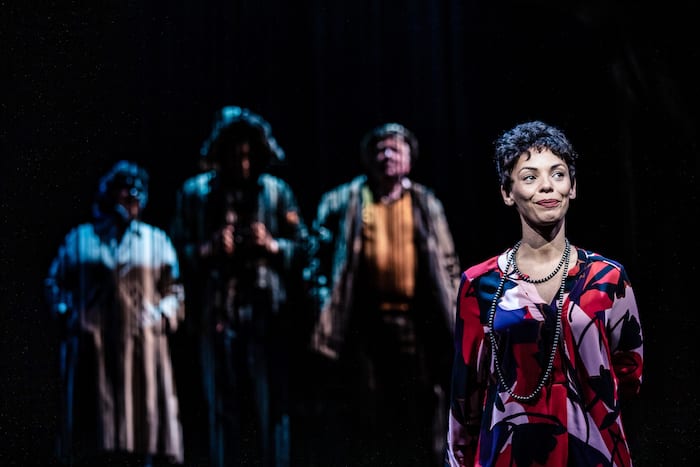 Poet, writer, and Chancellor of the University of Salford Jackie Kay has had an interesting life.

She grew up in Scotland as the adopted mixed-race child of an earthy white Communist couple and had to deal with racial abuse from other kids. Later in life, she realised she was gay and decided to find her birth parents, which took her on a journey of self-discovery to Lagos.

There’s more than enough material here for a good play.

Red Dust Road began life as a memoir and has been adapted by Tanika Gupta, who did a fine job updating Hobson’s Choice to a contemporary setting at the Royal Exchange.

The opening scene is incredibly immediate and very funny. We begin with Jackie (Sasha Frost) meeting her birth father, played with incredible energy by Stefan Adegbola, a born-again Christian who tries to convert her. Her upbringing, however, has been the complete opposite, which leads to a really gripping opening scene.

Her father comes across as enigmatic, cold and unfeeling whilst her adoptive parents, played with genuine affection by the brilliant Elaine C Smith and Lewis Howden, are warm.

The chemistry between the actors makes you truly believe in this family unit – and it’s a real showcase for the impact that a good adoption can have on both the child and the parents.

So far, so good. But there are a few bumps along Red Dust Road.

So much of Jackie’s interesting life is glossed over or mentioned but not explored in any great detail whilst other aspects are overdone.

She comes out to her mum in passing and although the reaction is not positive, there is no conflict and we move on.

Much of the dialogue involves characters reminiscing about the past so much that it starts to feel like someone talking you through a family photo album featuring people you have never met.

Jackie Kay is clearly a very positive person and this comes across in every single scene. This means, though, that even when something upsetting is happening to her, Sasha Frost is directed to smile or laugh, simply brushing things off.

But for a drama like this to truly affect the audience, you need light and shade and conflict, then the upbeat ending can emerge.

The protagonist’s search for her parents is covered in such incredible detail that the play starts to resemble an episode of Long Lost Family or Who Do You Think You Are?

This memoir would make a great a one woman play and the scenes which include poetry and song would feel more natural and other characters would not feel so underwritten.

Jackie Kay’s life has been full of wonderful moments and she has overcome massive obstacles with grace, dignity and optimism, and that comes across well. But you are left wanting more depth. Instead you witness scenes where characters talk their way through an emotional journey, instead of living it.

Red Dust Road is worth seeing for the superb Elaine C Smith and Simon Kenny’s striking set design. But if you’re a fan, you may be better off reading the book.

Red Dust Road is at HOME until 21st September.