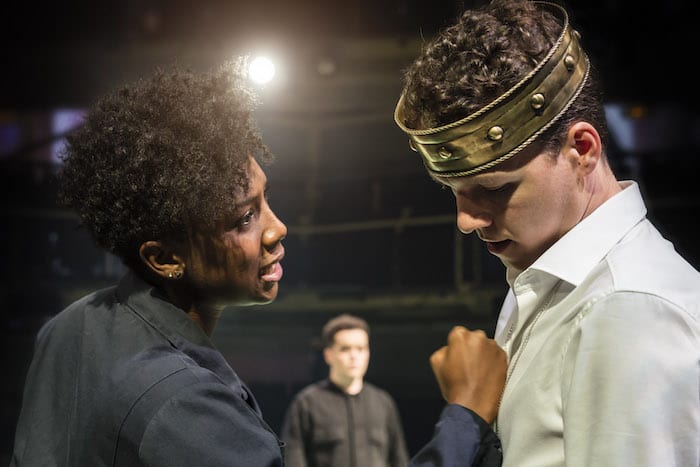 Queen Margaret featured in four of Shakespeare’s plays. The bard wrote more lines for her than King Lear.

In many ways, the Royal Exchange’s production of Jeanie O’Hare’s Queen Margaret feels like a classic Shakespeare play.

It’s an incredibly wordy play but the modern dress and contemporary references and satire, taking swipes at Brexit, consumerism and even selfies, means that much of what you see seems fresh.

Jade Anouka is a truly commanding presence as Margaret of Anjou. She has starred in the Shakespeare Trilogy: Julius Caesar, Henry IV and The Tempest, and the words flow from her with genuine ease.  Her attitude, the fact that she is a female leader, and that she has great humour, but is also relentless in her quest, means that you are drawn into the narrative.

Max Runham, fresh from his success in A Taste of Honey at Oldham Coliseum recently, is also excellent as Henry VI, as he conveys stoicism and vulnerability, equally.

And Helena Lymbery’s sweary and funny narrator has the right amount of cynicism to bravely knock the Shakespeare texts of old.

Director Elizabeth Freestone has tried to bring a sense pace and drama to the battles by punctuating long scenes of speech with short sharp scenes in which characters march on and off stage. But instead of placing you within these epic, violent battles, time begins to drag.

Johanna Town’s lighting is incredibly striking and works wonderfully, particularly when Lucy Mangan’s Joan of Arc in on stage as it illuminates her and gives her the otherworldly presence that she needs.

Amanda Stoodley’s set design features lines of bullets being dropped from the ceiling and many other neat surprises throughout.

Purists will get something familiar but with the focus on a character they have seen before but not centre stage. As for those who are not familiar with Shakespeare, it may raise their interest in the Bard’s work.

I liked the fact that O’Hare has been influenced by current events. The dialogue, “Blah, Blah, Blah”, which is used in a meeting, reminded me of the media’s endless pontification during their Brexit coverage, even when there is nothing new to say.

The play’s references to France highlight how European our ancestors were and that if we looked back before we attempted to look forward, we may not be in the current
turmoil.

The thriller element, reminiscent of Game of Thrones, has a slow build-up, and there are some bloody, and violent scenes, filled with black comedy. This is where the play comes alive.

Queen Margaret has some great scenes and some truly fine performances, and there are some great nods to Shakespeare, alongside the funny swipes, subverting what has gone before.

And there is something really admirable going on here, because it would be so easy for the Royal Exchange to stage another Shakespeare play that had not been seen for a while.  People would come and the schools would book it out.

I just wish the narrative flowed more. It still feels slightly incoherent and does not always work as a whole.

But there is much to enjoy and there is something great about seeing a female character we know reclaimed and fleshed out as a truly majestic protagonist.

Queen Margaret is at The Royal Exchange Theatre until 6 October.