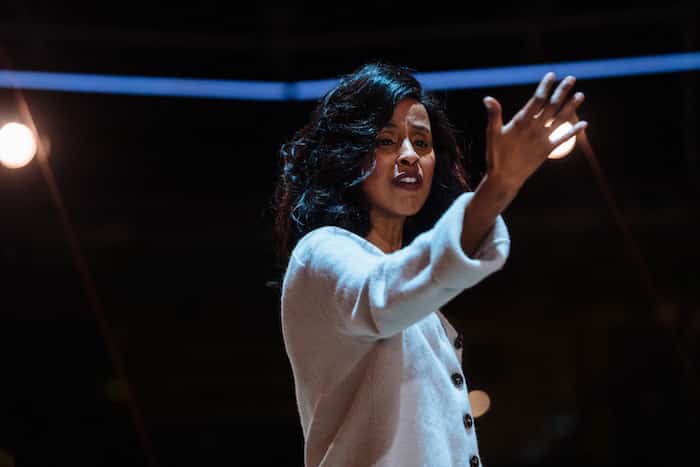 Nora is mannered though and subservient during key moments in her turbulent life. What would happen if Nora lived in 1968 or 2018, as well as 1918? What could be added to her story and how would she now react to certain situations?

This is the intriguing premise behind Stef Smith’s clever and astute adaptation, currently at the Royal Exchange Theatre – and for anyone who feels that this play does not need messing with, read on.

This new version retains much of the original action and the story is essentially the same. Nora Helmer is living a good life, on the surface. Her husband Thomas (Torvald in the original) is up for a promotion, so Nora is spending money to forget about her silent feelings of emptiness.

This is where Stef Smith decides to take many twists and turns. I have always found Nora to be very intelligent and articulate but whenever I have seen A Doll’s House, I have longed for more emphasis on this, as she is made to feel stupid by men.

Smith highlights this and we see her internal struggles borne out before your every eyes in a way which is visceral and highly inventive.

The claustrophobia of a woman trapped, living a confined and closed off life and not by choice, is explored with both beauty and pain.

Watching Nora attempt to dance off the shackles of her life is incredibly powerful. Another scene features her circling the stage like a hamster on a wheel, looking for a way out and the effect is incredibly poignant.

Louise Anderson’s evocative lighting helps you to see what enormous pressure this woman is under. She may not sweat but the spotlight is on her, as we watch and wait for her to crack under the strain.

Amanda Stoodley’s set design complements the idea of a woman caught up and entangled, even when she opens the front door, you are never really let in.

Everything feels like a structure, as opposed to a home. There are presents and things to give off the feelings of belonging and prosperity but the heart of the family has gone.

Bryony Shanahan has a difficult job because this production features three lead characters who never leave the stage, and they may share the same name but they are leading parallel lives, but they are different. They have to be for this to work effectively.

So we find ourselves watching the original Nora (1918) played with a genuine sense of wonder about the world by the brilliant Kirsty Rider.

This Nora feels familiar but a little less closed than you will remember.

Next we have Nora (1968) who is on the verge of something during a time of real change but remains stunted and shut down, played by Jodie McNee, who gives her a streetwise feel, even though she has never been very far. She has an urge to do so.

Lastly, Yusra Warsama plays the closest we have to a protagonist for today – Nora (2018), and this is the version that resonated with me the most.

She has a mobile phone and she swears but none of these devices are simply here for show or to state “this is updated.”

Warsama still retains those unsaid words and internalises them but she brings out Nora’s sense of adventure and the feeling that there must be something else out there.

She becomes Ibsen’s Shirley Valentine, as she is almost talking to the wall.

Every single character in this production is flawed but none of them are totally unlikable; they all have qualities which makes it difficult to watch, as they all have inner struggles.

Thomas is a provider but likes the control and belittles his wife. He has humour and he wants the best for his family but he does not know how to express his true feelings.

William Ash is excellent, particularly during the many angry exchanges. You can sense the frustration beneath his cruel put downs.

Andrew Sheridan plays Nathan, a man trapped by his role and he manipulates and schemes his way through life. But he is no villain and Sheridan gives him an earthy and engaging quality, even when you do not find yourself agreeing with his actions.

Daniel is a man with secrets and holds back from telling Thomas what is happening to him because Thomas has no time for ugliness or bad things that happen to people. Naeem Hayat gives a quietly refined performance and it brings something different to this production because it allows you to pause.

Some may find this new version of Ibsen’s classic play a little distant. For me, it is the complete opposite.

Seeing three versions of a character from different eras on stage at the same time taps into the thoughts, feelings and desires, that we see in the original but now through a contemporary prism.

Here, you are able to understand and appreciate that Nora could and does exist right now. She is not a museum piece, she is an intelligent and strong woman who is weakened because of her gender.

The famous ending which left the audience open mouthed is stunning here because Nora now has an external voice and her difficult and controversial decisions make complete sense.

Nora has the last word: “I believe that I am first and foremost a human being.”

Nora: A Doll’s House is at the Royal Exchange Theatre until 2nd April and can be booked here.