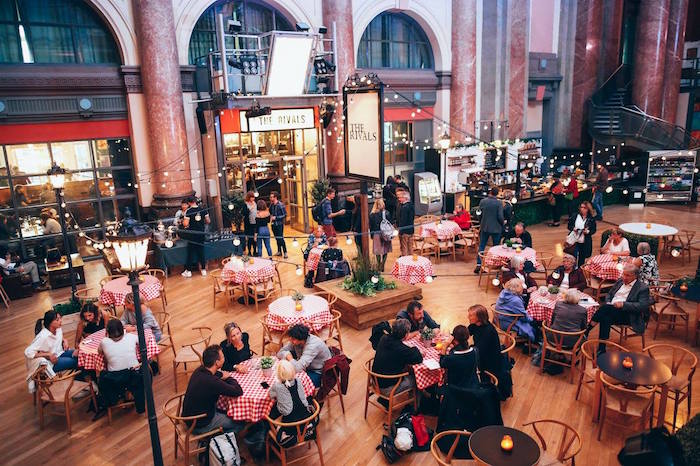 I’ve always had a soft spot for the Royal Exchange. For me, as someone born in Manchester just after the Second World War, it’s been one of the city’s constants. Like the town hall, Central Library, Art Gallery and Midland Hotel, it’s always been there.

Though it took a direct hit from a German bomb, it survived the blitz when so many of the surrounding buildings did not. It survived the possibility of being demolished when its great trading floor fell silent half a century ago this year. And after its remarkable conversion into a theatre in the round, it survived the IRA’s detonation of the biggest bomb ever exploded in peacetime on the UK mainland.

My wife and I are not regular theatre goers – far from it – but we have enjoyed eating in some pretty spectacular settings, not least Sydney Opera House. Just don’t ask us what the production was at the time.

So when the Royal Exchange’s new bar and restaurant received enthusiastic reviews, we made a note to go. 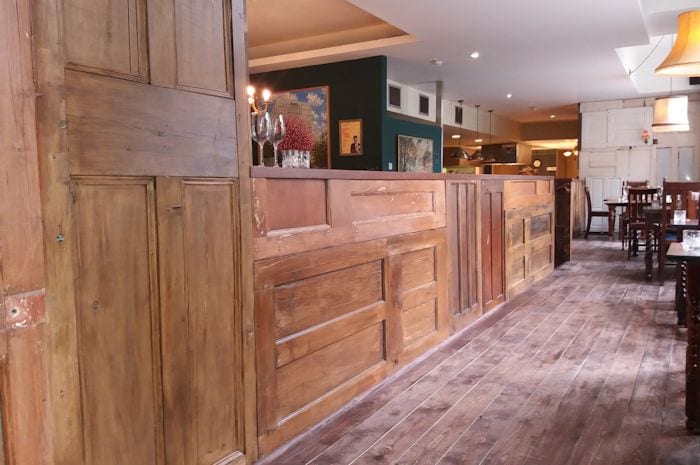 We arrived late lunchtime as a matinée performance of Frankenstein was under way in that huge space-age steel contraption beneath the soaring domes. The Rivals Café spills out on to the main floor while the restaurant and bar – The Rivals, by the way takes its name from Sheridan’s comedy, the first play staged at the Royal Exchange – occupies a long split-level room overlooking Exchange Street and St Ann’s Square.

Walking into Rupert Hill and Goska Langrish’s dining room is like entering, stage right, a theatrical set suggesting the 1960s. The main hall is all neo-baroque magnificence – a cathedral for Cottonopolis – but the restaurant space is, well, homely. Rustic even.

The props and the atmosphere reminded us, though on a bigger scale, of Peter O’Grady’s Market Restaurant up in Smithfield or That Cafe in Levenshulme back in the 1980s, with their eclectic assemblies of second hand tables and chairs in various shapes and sizes and period tassled lampshades.

The Rivals has gone one further, fashioning many of the internal fittings and partitions out of old doors.

Anna Fysh’s menu offers more than a touch of nostalgia too, majoring on the sort of traditional, hearty British favourites one might expect to encounter in a country pub rather than in one of the grandest buildings in the city centre. But the menu’s promise of big, robust flavours was well and truly delivered on the plate. 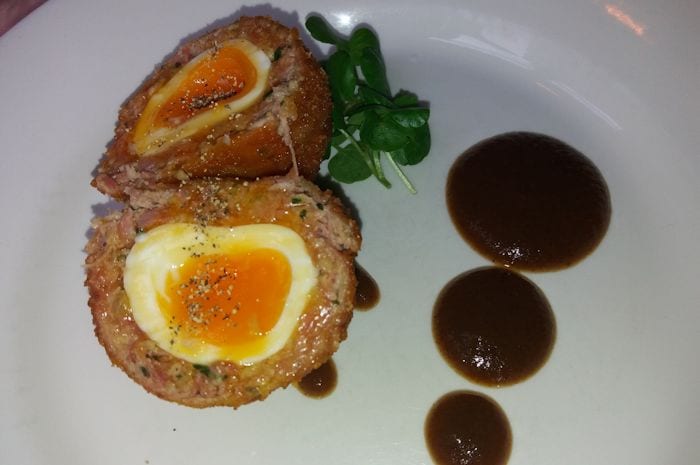 My starter was a new take – for me at any rate – on a much loved theme: ham hock Scotch egg (£5.75) with the perfectly timed runny egg enveloped in a soft, flavour-crammed salty coat of pulled ham in place of sausage meat or increasingly fashionable black pudding. Served with blobs of home-made brown sauce, it was breakfast rolled into a ball. Tip-top. 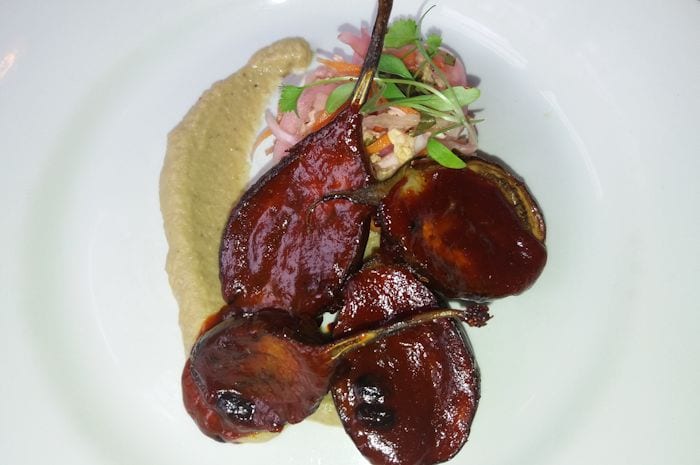 Mrs K began with the most exotic dish on the entire menu: slices of baby aubergine roasted in a spicy Szechuan glaze with aubergine purée and sweet and sour Napa (Chinese) cabbage (£6). Not quite in line with the British focused theme, but not lacking in intense flavours either.

Had it been dinner, one (or both) of us would have opted for braised featherblade of beef or rolled lamb breast. But this being the middle of the day, fish dishes got preference. And they were excellent. 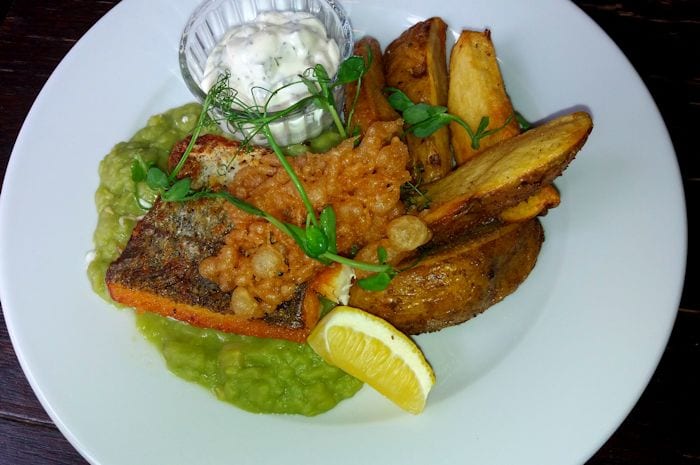 I had roast hake fillet (£17), cooked just so, its fine creamy flesh still firm under its crisped skin. It came on a puddle of mushy peas and scattered with crunchy beer-batter scraps with a generous portion of salt and vinegar potato wedges. A clever variation on traditional fish, chips and Manchester caviar, lifted by the quality of the hake and the accompanying chunky home-made tartar sauce. 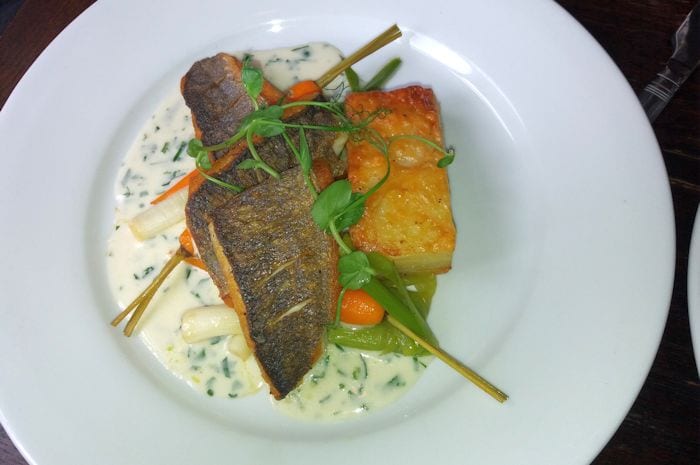 Mrs K enthused over her roast sea bass fillets (£17.50) – three of them – skin crisped, flesh soft and seafoody in flavour, served with braised baby leeks and carrots, a delightful square of potato and Parmesan terrine and a silky parsley sauce. 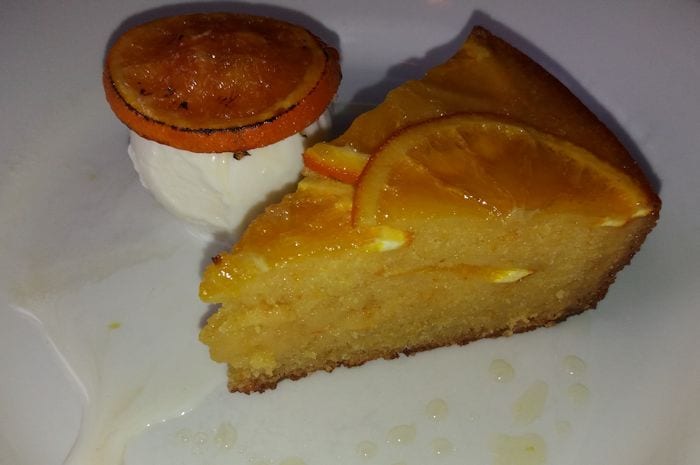 My marmalade and orange cake, deliciously soft and moist and shot through with the tang of citrus (£6.50), was partnered by a ball of velvety smooth honey and yoghurt sorbet topped with a slice of candied orange.

The Rivals also features a menu of bar snacks, focaccia bread pizzas and a pre-theatre set menu – on which no less than five of our choices are listed – offering two courses for £20 and three for £25.