Review: Matilda at The Palace Theatre 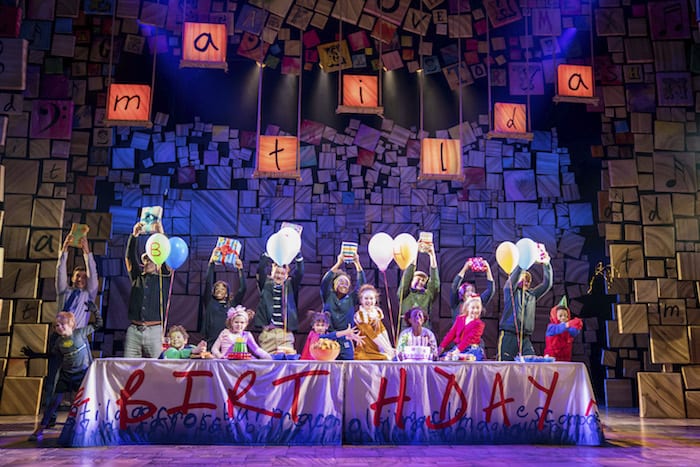 Tim Minchin is quirky, eccentric and quite unpredictable, so it’s apt that he is the man behind this Royal Shakespeare Company production of Roald Dahl’s Matilda.

His music and lyrics are neither safe nor typical of musical theatre. They creep up on you and make you laugh out loud but also have a dark quality, meaning they stay true to Dahl’s vision.

Likewise, writer Dennis Kelly expands on the original material but retains the black comedy. Miss Trunchbull is even more dastardly than the bookworms who have devoured Matilda and other classics by the late, great children’s author.

Matilda Wormwood (played with wide wonderment by Sophia Ally) is one of those kids whose parents do not get her. She escapes to the library to read as her life at home is hellish.

Mum (played with a delicious sense of superficiality by Rebecca Thornhill) is critical because she thinks her daughter should be more like her. Dad (played with a sneer by
Sebastian Torkia) is a duck ‘n’ dive kind of guy who wishes that Matilda was a lad – so much so he calls her “boy.”

Longing for an escape, the poor kid cannot even tell her teachers as she also has Miss Trunchbull, her godawful headmistress who looks like a cross between Gru from Despicable Me and the witch from Chorlton and the Wheelies, to deal with.

Craig Els has a field day with this gift of a role. Trunchbull is really nuanced and fully fleshed out, never becoming a pantomime villain. Her behaviour and hatred of children is darkly comic.

Carly Thoms’ Miss Honey is the light at the end of the tunnel, that one teacher who sees that Matilda is gifted. A scene in which she offers Matilda more books to read is incredibly moving, as we see the neglected kid hug her teacher and does not want to let her go. Thoms’ awkward body language during this scene highlights how small she
feels and why she is drawn to Matilda, her mini-me.

It’s hard to single out the other young folk in the cast as there is such a lot of talent on the stage that everyone deserves a huge round of applause.

This is a slick show, that avoids crowd pleasing, finger-clicking songs. And the kids in the cast revel in the black comedy and Miss Trunchbull’s disdain for anyone young and vivacious.

Pete Darling’s choreography is filled with exuberance, no more so than during the brilliant Revolting Children, which defies genre codes and conventions, and has enough defiance in it to make any adult long to be child again.

You may recognise When I Grow Up from TV adverts. It’s a masterclass in how to write a song. It has peaks but is in no rush to get the chorus. And that is quite something, as it teases you, as opposed to giving you exactly what you want. This means the pay-off is even greater.

Ben Davies’ set design is striking and looks like the inside of Matilda’s mind, filled with letters, blocks and books from floor to ceiling. This contrasts with her home where the telly is front and centre.

There is also magic on display as Matilda realises she can control the wrong in her world through powers which develop as the show progresses. The sight of a board writing messages with chalk on its own will thrill you and your kids.

Matilda is a musical like no other, but there is a rawness reminiscent of Billy Elliot. For lovers of the original source material, there is something unpredictable about this show. Having Tim Minchin on board means that things play out like a Bjork song. It’s oh so quiet one minute then all hell lets loose the next.

And with Craig Els giving a tremendous performance as Miss Trunchbull, the best musical villain I have ever seen, there is only one grade you can give this show. An A*.

Matilda is at The Palace Theatre until 24th November 2018.