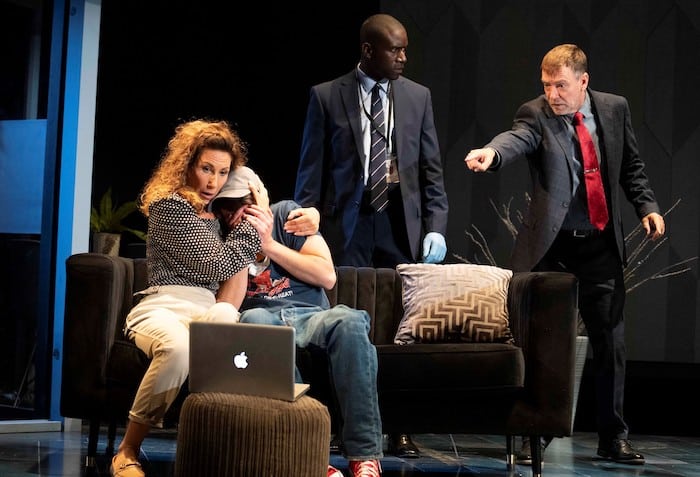 Starring Adam Woodyatt and Gaynor Faye, Looking Good Dead focuses on tech - and what happens when it gets into the wrong hands
Share
Tweet
Share
Chat

You only have to look at some big TV hits to see just how much we all love a crime thriller.

Line of Duty leads the pack with its ‘plate of spaghetti’ storylines and fully rounded characters that you really care about.

We also love to read great thrillers, and page turners such as The Girl On a Train prove that you can turn a thrilling novel into a gripping stage production. What did not work on film, starring Emily Blunt, thrilled theatre audiences just as much as the book.

Peter James’ crime novels have been published in 36 languages, and following successful stage adaptations of his work in A Perfect Murder, Dead Simple, Not Dead Enough and The House on Cold Hill, it is no surprise to see this formula repeated with Looking Good Dead, which focuses on tech and what happens when it gets into the wrong hands.

Add Eastenders star Adam Woodyatt, who has had his fair share of thrilling plot lines, and Gaynor Faye, who recently starred in the stage thriller Band of Gold (adapted from the hit TV show) and you have all the ingredients you need for a great night out.

Adam Woodyatt plays Tom Bryce, a man living above his means. This is affecting his relationship with his wife, Kellie (Gaynor Faye) and their tech loving son Max (Luke Ward-Wilkinson) to such an extent that they are living in different worlds.

They also keep referring to secrets from their past, to such an extent that it feels like neon signs are about to be dropped from the ceiling with the words ‘secrets’ emblazoned on them.

A really good thriller drops breadcrumbs within the dialogue or scenes, so that you can play at being Hercule Poirot and work it out for yourself. And there is nothing more satisfying than getting ahead of the game.

Tom finds a memory stick on a train, left by an annoying passenger – the type who shouts on their mobile and lets everyone know they are “on the phone.” Instead of hand it in to a conductor, he decides to take it home.

The stick contains a link to a website and he and his son witness something which is described as “disturbing”. But because of the way of this scene is executed, it looks as harmless as a scene from Peppa Pig.

Suspension of disbelief is required at this point, and I can normally go for that, after all this is not a documentary. But every character in this play seems to have it coming.

The phone rings and the person on the other end claims to be the bank. They ask Kellie for her address, she gives it to them. You now know where this is headed.

The police offer the family protection and state “stay inside.” So, what happens next? Max goes outside.

The police are depicted as keystone cops, as they leave obviously shady characters alone to communicate and then pop back into the room and say: “Is everything okay?” The dialogue is so clunky that Detective Superintendent Roy Grace describes a snuff film he has watched for the investigation as “particularly disturbing and nasty”. Is there any other kind?

New technology is mentioned at every opportunity and terms such as bitcoin are thrown into conversations. But, instead of giving you new found understanding of a murky underworld, they seem to be used just to state “this is a contemporary play, don’tcha know?”. There is no depth or exploration here.

The acting is fine. Woodyatt is used to playing a man out of control, so he does that again here and his voice is so familiar to us all, that it feels like Ian Beale has moved out of Walford and made it big.

Gaynor Faye attempts to make her character fully rounded, as there is more to her than meets the eye, but the writing holds her back and sells her short. Her character’s secret drinking could lead to something meaty, but everything is rushed.

Luke Ward-Wilkinson acts frightened and there are moments when his character Max is in peril, but again, his character does not feel fully formed enough for you to care.

Jonathan O’Boyle has directed some brilliant productions at the Hope Mill Theatre but he cannot really work his magic here because nothing on stage feels believable or thrilling enough.

Fans of Adam Woodyatt and Gaynor Faye will get to see their favourite TV stars on stage, and if you love Peter James’ novels, I am sure there is something for you. But something is lost in translation and everything is spelt out and explained, and the denouement is rushed and delivered at 300 MPH and ends up feeling like Scooby Doo.

Despite the best efforts of the cast – for me, Looking Good Dead is sadly DOA.

Peter James’ Looking Good Dead is at The Lowry until 22nd January. Tickets are available here.