Written and performed by Roma Havers, LOB is a 45 minute show, featuring poetry and dance in equal measure.

The show begins huge, with a blast of early noughties pop music signalling the start, and the momentum only builds from there.

LOB explores how it feels to grow up slightly to the left of everyone else, to know you’re different in ways you do not understand and cannot articulate, but have heard from other people.

Armed with two satsumas and a swing ball set, Roma Havers is frenetic in her delivery of this sometimes monologue, sometimes disco. She commands attention and owns the space. With only a victorian ghost for a doubles partner, Roma Havers manages to capture the feeling of playing by yourself as a child.

At times, LOB feels like an elaborate playground game, in the best way. Complete with its own set of intricate rules that the audience is learning on the spot. It is intimate and raw and feels unpolished in the best way. Despite being deeply personal, the themes feel universal: failure, childhood dreams and stepping out from behind the shadow of who you hoped you’d be. 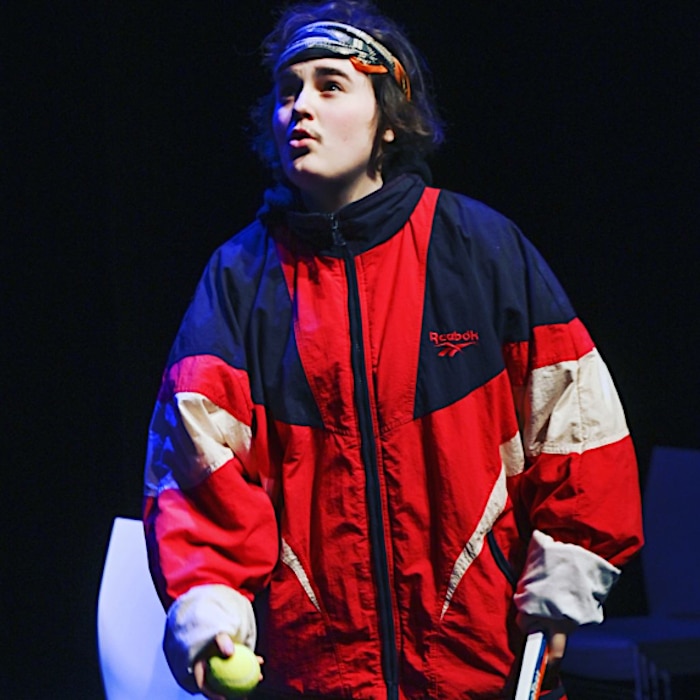 The language of LOB is beautiful; a mix of poignant prose and pop culture references, it jumps from topic to topic in a chaotic way. This only adds to the performance as it mirrors the frenzy of adolescence and how some memories are only formative in hindsight.

Each word spoken is clearly carefully chosen for maximum impact and narrative purposes, as Havers places great importance on the deconstruction of language and finding your own meanings within familiar words, as many LGBT+ people have to do.

LOB illustrates the performative aspects of gender and sport by highlighting how, when broken down, each can be thought of as a series of behaviours – both taught and learned. Some come more naturally than others and LOB celebrates the joy of knowing when to let go of that which does not serve you. It is joyful, communal and tender, and well worth the watch.

LOB is at the Contact Theatre until 8th October 2022. Tickets can be purchased here