It begins with a gunshot. The audience sit in shock as Cordelia enters, clutching a rifle, taking aim into the auditorium. This production of Shakespeare’s tragedy of an old king undone by his own pride explores themes of madness and power in unusual ways.

Tyrants turn to
monsters. Men
turn to melancholy,
misery and madness
– like the king.

As the smoke from the shot fades, the entire cast take to the stage to sing the Dovine Salvum – a chant calling on God to save the king. Yet rather than a song of praise, it is used as to foreshadow where the true power lies in Shakespeare’s subversive story. A king who loves the idea of power but cannot handle it in reality.

Lear, convincingly played by Michael Pennington, seems a king confined by the bold personalities around him. It’s a a skilful way to approach his gradual undoing and a sign of Max Webster’s sensitive direction, using the skill of each individual actor to undermine the king. It’s chilling.

As the chant takes place, a fiery Goneril (played by Catherine Bailey with some serious power-dressing going on, thanks to wardrobe mistress Kim Blazon) commands instant authority whilst Regan (Sally Scott) maintains a well crafted coldness. These are the two women who will watch their father descend into anger, loneliness and eventual madness.

The third sister Cordelia (Beth Cooke bringing great balance and sensitivity to the role) says poised and reserved, refusing to indulge her father with false praise, whilst her sisters gloat.

The disturbing family dynamics are well-maintained throughout despite a small cast of no more than 14 people. Over the course of three hours, we see these characters increasingly agitated as Lear’s quest to control his kingdom falls into the grasp of his two elder daughters and their lovers. Massive themes of deception and the abuse of authority are surprisingly well handled with clever casting decisions made by Joyce Nettles.

We are presented with, rather than confronted by, the character of King Lear – a refreshing approach. Even though the ravages of age and madness grip the man and the world around him (the 1920’s-style minimalist set design from Adrian Winford adding to an unnerving atmosphere), it becomes increasingly clear over the course that he is a man, not a monster.

Tyrants turn to monsters. Men turn to melancholy, misery and madness – like the king.

Michael Pennington puts power and pathos into Lear. Yes, he craves power, but he also sings along to songs, cradles his daughter and increasingly falls into the ravings of a sad old soul. The performance is moving to watch and sustained over three hours, making Pennington’s dedication even more clear. Emotional force is present in the affection between Lear and his Fool played by Joshua Elliot. Accompanied by an accordion, the Fool brings out a touching childishness in the king, a far cry from the productions which portray him as a twisted old man.

There are aspects of the production which are a little more confusing, with some actors playing several roles. Some may question the decision to use such a small cast. However, it could be seen as a deliberate ploy to increase the play’s intensity in depicting the theme of madness.

This is particularly striking in the eerie similarity in appearance between Lear and Gloucester (played with gusto by Pip Donaghy). We participate in the discomfort building up between the characters and can almost taste the tension. And as we see Gloucester’s eyes gouged out, glistening under particularly intense light (carefully co-ordinated by Natasha Chivers), it is easy to draw parallels with Lear and suggests his own metaphorical blindness.

This is a long but rewarding production with a strong cast and clever design. A realistic and rousing thunderstorm in the first half is not only symbolic of shaky family foundations but shakes the audience too! Well worth seeing. 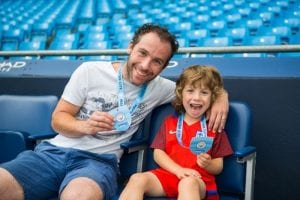 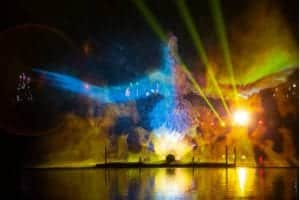 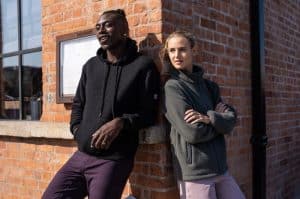