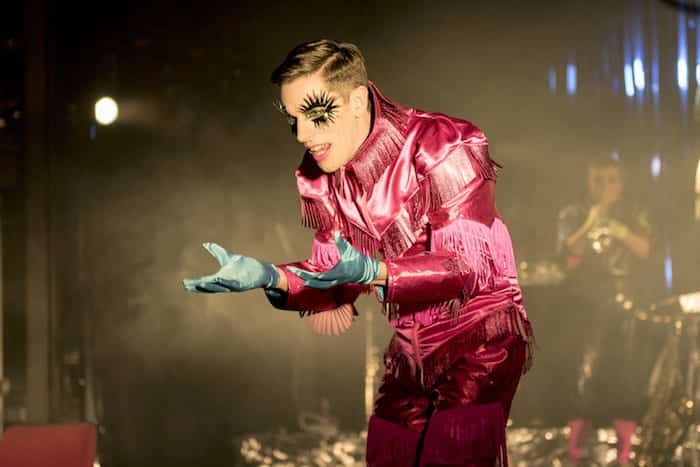 There is no place like HOME when it comes to film. Jason Wood and his team of programmers know what punters want, and recently the venue had its most successful weekend.

For theatre though, following the Library Theatre has not always been easy. There have been times when pretension and chin stroking have been the name of the game, alienating people who want to go to HOME to be entertained.

There have been many exceptions, including The Manchester Project, so good that it returned at Christmas as a fun sequel; a brilliant reworking of Ibsen’s Ghosts; and a stunning production of Eugene O’Neil’s Long Day’s Journey Into Night.

Bourgeois and Maurice’s camp extravaganza is exactly what HOME should be commissioning, as it is reminiscent of the heyday of the Contact Theatre.

If you have seen Kiki and Herb there, you will know that life can be cabaret, old chum, when you have a dynamic duo, a band and some fast and furious songs which have references to everything from the news, social networks and the crazy world that we live in, right now.

Some have likened this show to Rocky Horror. It has more in common with Richard O’Brien’s Shock Treatment, but it is far more that.

Two glamorous aliens, Bourgeois and Maurice, are our hosts with the most as they bring their glitter covered world to Manchester and park their spaceship on the roof of the Arndale.

High on poppers and their own personalities, they interact with the audience and narrate an epic story interspersed with songs.

This is essentially an intergalactic musical, which is like eating several packets of space dust at once, washed down with a bottle of Mountain Dew, followed by sing song and a large G&T.

Everything is dialled up to 11, and even though the plot is as thin as Dumb and Dumber, the thing that keeps you entertained is the fact that it gets camper and camper.

There is something clever at play here, though, because the songs, which could be throwaway, have the charm of Victoria Wood’s material. With each punchline is a pertinent message about the society in which we found ourselves in.

In terms of musical style, there is rap, high octane Eurovision style numbers and Mariah Carey style ballads, and each one has the potential to plant a smile on your boat race.

Liv Morris and George Heyworth have written a fast paced and very funny show which has so many gags that many whizz past you like a Manchester bus on a rainy day. But instead of drenching you rain water from a huge puddle, you end up covered in gold dust and sequins. The effect is genuinely mood changing.

Phillip McMahon directs with an eye on pace and this works well for the most part, as the gags line up like contestants waiting to eat cockroaches on a I’m a Celebrity.

Some of them hit their target; one features a note from a worker at Amazon with the words ‘Help!’ and it leaves you choking on your Pinot. The odd gag falls flat, and at times there are so many tone changes that the serious aspects of the show do not always work as well as the funnies.

Michael Hankin’s set design has the feel of a deliberate Blue Peter Tracy Island competition entry. Everything feels like a virgin, shiny and new, thanks to the silver foil effect placed over everything to make it look like a seven-year-old camp boy’s version of space and the final frontier because he has run out of pennies.

The best way to describe this wild and wacky show is Flash Gordon meets Barbarella, with bangers that have the appeal of Kylie Minogue’s Your Disco Needs You. The best of these include the highly addictive title song and the Mel Brooks soundalike sing-along appeal of Gay For You.

The cast are game. As well as our two so-funny-they-should-be-illegal aliens, Lockie Chapman is excellent as the straight-faced character of their stories, who has the ability to switch between comedic and serious at the dock of a spaceship.

Kayed Mohamed-Mason is also brilliant, and he and Chapman become a space age Bert and Ernie and one point. Seeing is believing.

As for the band, they are like a group of E.Ts themselves, extra terrific – keeping the show ticking along with their marvellous musicianship.

If you fancy a Close Encounter of the Furred-Coat And No Knickers Kind, then spend the evening in the crazy company of Bourgeois and Maurice and their space hopping friends.

These are Guardians of their own Glam Galaxy. Strike a pose and jump on board.

Insane Animals is at HOME until 14th March.