Review: Heads Up at HOME 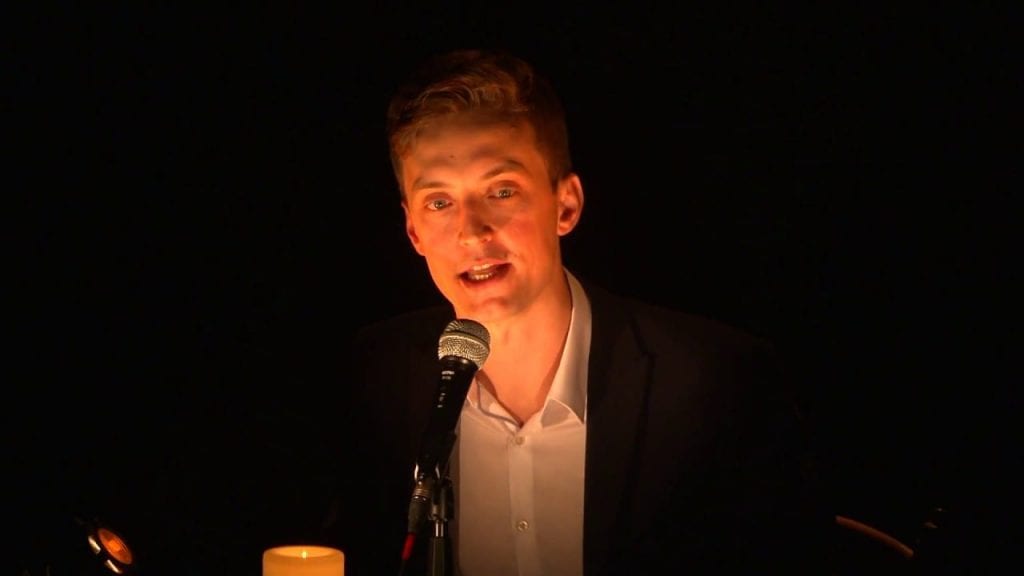 Kieran’s Hurley’s one man show Heads Up received rave reviews at the Edinburgh Fringe last year. Now it’s touring the UK with its quietly captivating story of the end of the world.

With a desk full of sound keys, a blinding desk lamp and a candle the only props in the show, all eyes are 100% focused on Hurley. He tells the tale of the apocalypse through four very different characters whose lives do not intertwine.

There’s Mercy, a trade worker who realises the world is coming to an end. Ash, a teenage girl gamer whose ex-boyfriend has shared a compromising picture of her across social media. Leon, the cocaine addicted hip-hop artist whose girlfriend is in labour. And Abdullah the coffee shop worker whose internal monologue does not match his customer service smile.

Hurley uses the desk’s table-top equipment to fill the stage with a pulsing soundtrack which rises and falls at all the right moments.

Dressed in a suave suit but with bare feet, Hurley delivers a raw and exquisite performance that emanates passion and pure talent. His physicality and facial expressions are mesmerisingly believable and create a vivid vision of each character.

He begins by saying that the story is set in a city ‘like yours’, before proceeding to talk about these realistic characters who are addressed as ‘you’ which pulls the audience into the story from the get go.

At one point, he refers to the audience directly and depicts the situation of everyone in the room. This heightens the intimacy of the performance and creates a slightly uncomfortable atmosphere – in the best possible way.

Each character is blinded by their own problems, unable to see that the end is nigh until the last minute and can’t do anything to change it.

This incredible, impressively long and diverse monologue serves as a warning or a ‘heads up’ to the inevitable end, unless people on the earth change their ways.

Though heavy and sorrowful from the start, the overall performance is not unremittingly bleak. There are many funny moments and the sheer believability of his performance creates humour at many points.

The bright lights and loud noises are used in fantastic ways, making the audience squint and wince – which is very effective – at all the right moments.

As the stories conclude, the tales collide into each other more and more violently. This is a beautiful way of reflecting chaos with chaos.

There are many hard-hitting aspects to the depiction of the apocalypse but there is also dark humour as apocalypse selfies are snapped in the centre of the destruction.

The show concludes with Hurley blowing out the candle, while the lights simultaneously fade. Although simple, this is a very effective ending – enough to cause a shiver throughout the audience and give me goosebumps.

Heads Up is a cry for help, almost from the planet itself. A plea to do something with our lives, to recognise the humanity in others and to look after the world we live in.

Kieran is a phenomenal performer who grips an audience for a whole hour without once faulting his words. Despite the fact that it is a solo show, it truly captures the essence of the era.