Review: Hair at the Palace Theatre

Although Hair was first staged in 1968, I didn’t get to see the Broadway transfer until 2010 in the West End. I was mesmerised by it and have been looking forward to seeing this Hope Mill production which is touring the UK until August.

The show follows an East Village hippie tribe who dress like characters from Scooby Doo attending a sixties-themed party but want change. Against the backdrop of the Vietnam War, they question what it is to be American in the land of the free .

At the end of act one, the characters shed their clothes and their inhibitions, standing on stage naked for a few seconds. In the 1960s, some audience members reached for their dinner jackets and left. These days they have probably seen more explicit images on Channel 4.

But in a world where protests have been replaced by tweeting your disgust at something, or clicking on an online petition, there is something really refreshing and nostalgic about the messages of Hair, including free love, gender identity, experimenting with drugs, and a strong anti-war message which permeates  the whole show.

There are a few changes to the original show which jar slightly. Having audio of Trump and Blair speaking about war and conflict at the beginning of the show is not really needed because the great thing about Hair is that the audience can see that history keeps repeating itself.

And some elements of the score have been tweaked to no real purpose yet the overlong hallucination scenes remain and now seem quite dated.

What does remain though are the moving music and excellent songs, such as Aquarius, Donna and others that you know well, as they have become part of popular culture, used in adverts and auditions for many TV Talent shows.

This is an ensemble piece, with each member of the tribe working hard to engage the audience, and their efforts are rewarded, with plenty of goose bump moments, mainly due to some superb voices, which raise the roof many times.

Stand up Aiesha Pease, who has the kind of Take Me To Church vocals which would have Hozier and Rag ‘n’ Bone Man texting her for a duet. Daisy Wood-Davis hits the sweet spot many times as rich girl Sheila. Her Good Morning Starshine could wake a hungover student.

Natalie Green and Kelly Sweeney also impress in this hugely talented cast. Marcus Collins as the deep voiced Hud may be saddled with a Jack Sparrow wig, but is so soulful that if you close your eyes it could be Luther Vandross. Paul Wilkins plays Claude Bukowski with ease and is a commanding performer. His fight is totally engaging.

Tom Bales is a scene stealer and works the audience a treat in a dual role, playing both Glowy and Margaret Mead, and jumping on the lap of an unsuspecting audience member.

Bradley Judge has great comic timing and marvellous chemistry with Jake Quickenden, with the Dancing On Ice winner proving to be a credible and humble stage performer. He is clearly having the time of his life, throwing his pants into the crowd and revelling in the comedy.

If you are a regular at Hope Mill, the thrill for you is watching how this small show has evolved to fill the huge Palace Theatre space. Maeve Black’s set and costumes are simple but effective with bunting and brightly coloured outfits suiting the anthems and flower power.

William Whelton’s choreography is superb, enabling the whole cast to come together as one.

Sure, the plot has always been as threadbare as the emperor’s new clothes scene when the cast discard their costumes and leg it off stage. But this is a show filled with big moments which enables each and every cast member to have their moment.

Director Jonathan O’Boyle may have opened up the show up and made it bigger, but Hope Mill and Aria Entertainment have still let the sun shine in and something beautiful remains.

Hair is at the Palace Theatre until 13th April. 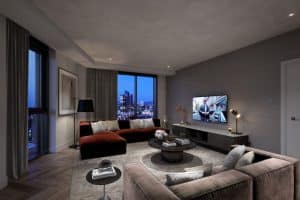 Life-sized polar bears are coming to First Street this Christmas

100 years of The Royal Exchange Manchester: history, memories and your stories