‘What’s the best restaurant in Manchester?’ I get asked regularly. It all depends on personal taste and cuisine, I reply. I can only tell you which are my favourites. With so many vibrant new restaurants opening, you could be forgiven for walking past old favourites. But Grill On The Alley is always on my list on account of its consistent and varied surf and turf menu.

But don’t ignore Grill Manc when it launches a seasonal new menu. If there’s one operator that knows how to compose a crowd pleasing menu of fine foods, it’s Living Ventures’ Blackhouse brand. With 42 changes – including Spanish and oriental inspirations such as chorizo and wasabi – their new summer offering doesn’t disappoint.

Grill On The Alley is utterly evocative of a classic New York steakhouse: dark, brick, wooden detailing, loud music, booths and lots of bellowing discerning couples. It’s convivial with one of the first theatre kitchens on the Manchester restaurant scene. Seafood is presented on ice beneath a fish tank, although oysters and mussels are usually unavailable because of their popularity. 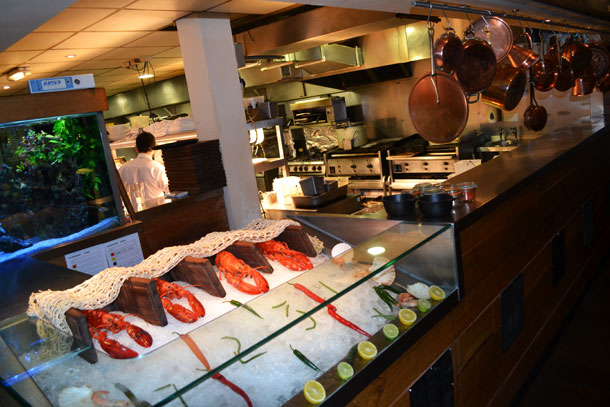 Our starters – spiced honey glazed chicken skewers (£6.75); asparagus; salt & pepper calamari (£6.25); prawn and avocado salad (£7.50) – were just a distraction from the main menu, which is just as it should be. Rather than adding a few new dishes to the menu, the starters are all completely new for the summer edition. Light, greaseless and diverting.

The service was questionable – not nearly as knowledgable about the dishes as when I last visited for steak and wine six months ago – but maybe it’s just because they’re new floor staff and this is a new menu with forty-odd more things to remember. Living Ventures has a fantastic career journey from floor staff to management, with notorious attention to detail.

The Grill on the Alley is known for its steak and for me this is always the star of the show. The more tender, the better. Occasionally, I go for a tasty ribeye but being on a bit of a health kick, I needed something less fatty which is why I opt for the 200g fillet (just £22.75). Premium quality beef aged for 28 days to ensure tenderness and flavour. The new red wine and shallot sauce (additional £2.25) drizzled over the caramelised tender cut and chunky chips was divine. 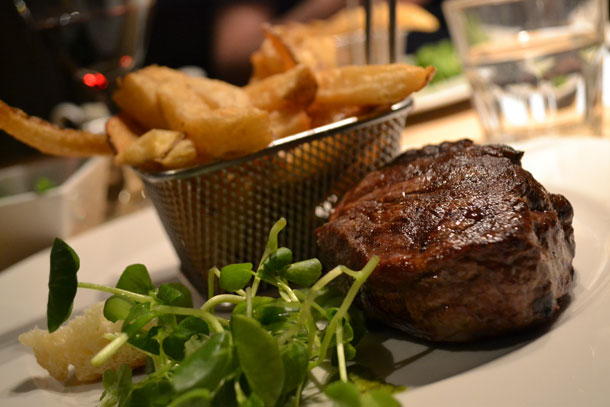 Although I’ve had slightly better beef, this is a complete dish that’s far more refined than just the caveman slab-of-steak thing. They take their meat and fish seriously here, not in the tiresome way of the new wave steak restaurants which perv over provenance and ageing, but in the way of a kitchen that understands that there are things which must be done properly. And without the big boys’ prices, too.

The new spring summer menu has seen them add their ‘Big Boy’ cuts to the menu. Tender, fine-fibred meat with low fat levels. The porterhouse – an almighty double T-bone that gives the indecisive diner the opportunity to sample both a fillet and sirloin within the same cut. The club steak – a double sirloin on the bone with a rim of fat that ensures the steak remains tender and tasty. Then the almighty tomahawk, which, as you can imagine, resembles a dangerous weapon which could inflict a good deal of harm but whose effects are quite the opposite. The top rib from the cow gives us a double ribeye steak on the bone. This steak is the fattiest of the cuts but the juiciest and most flavoursome of all the Big Boy cuts.

My partner, being red meat and fat averse and therefore not a great fan of steak, whether it’s 28-day aged or not, ordered the pan-fried sea bass fillets (£18), which were fluffy and white and absorbed the accompanying pak choi and teriyaki sauce like cotton wool. A lovely fusion with a sweet & sour after-taste.

So, in a city where no new restaurant is allowed to open unless it has first been sconced, glossed and generally conceptualised until its eyes water, there is still an awful lot to love about this staple old favourite just off John Dalton Street.