Review: Grease has a brilliant cast – and the modern kick that this show needs 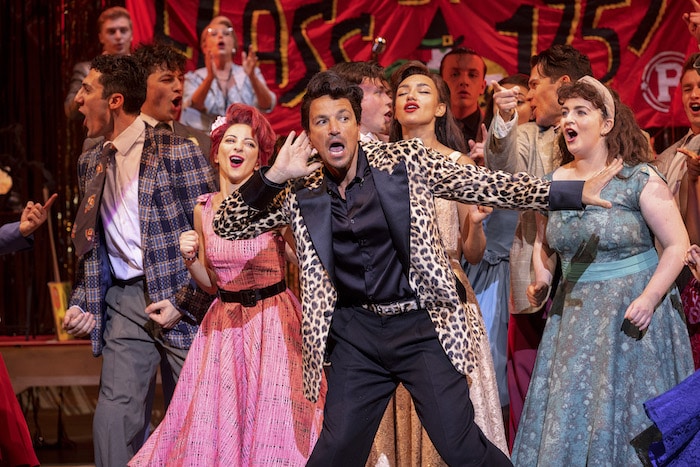 When staging a musical which has a well-known beloved film version out there, being watched on repeat – you really are caught between a rock and a hard place.

Do you simply recreate the greatest moments and please most people? Or, do you try something a bit different and upset some people who feel that their memories are somewhat tarnished?

Director Nikolai Foster clearly loves Grease, and you can see why. The story of Danny Zuko and Sandy Dumbrowski and their Summer romance is so rooted in popular culture that you can almost hear the lines before a character says them.

When you hear the songs, you picture John Travolta and Olivia Newton John singing them – but Grease began life on stage in Chicago in 1971.

So it is only apt that the windy city is the setting of this touring production which has been sat waiting to be “The One That ‘You’ Want” for almost two years now because of you-know-what.

The first thing to note is that you should almost forget the movie version – or at least put it on hold.

Imagine if the insipid Sandy who dresses up in hotpants and heels, puffing on a cigarette – ditching her clean cut image to please her man – took less crap from him. The essence of Sandy remains but she is far less subservient and, how do I put this? Far less… wet.

What if Danny was slightly more complex and that his quiff and hard nosed exterior was matched by the tough talking leader of the Pink Ladies, Rizzo? But that deep down, they both had their insecurities.

These roles have not been rewritten; we are now back with the Broadway source material and it really works, as it gives the show a more contemporary feel, therefore more realistic, and the Chicago grit adds more than just chewing gum.

Following some “Summer Loving” Sandy rocks up at Rydell High as the new girl. She meets the Pink Ladies and begins talking about this guy Danny who she met and she wonders ‘What he’s doing now?’ And you know the rest.

But due to the brave and spirited direction of Foster, who brings out the best in this brilliant cast, you do feel as if you are watching something really familiar yet somehow new.

The songs that you know remain, and they are staged with the energetic feel of a foal being let out of  stable for the first time.

This is in part down to Arlene Phillips’ fantastic choreography, which really focuses on bringing out the best in the ensemble dancers and performers. And wow, do they deliver!

There are additions to the song list, too, and these add more to the characters that you know and love.

Colin Richmond’s superb set design features the school, the diner and the vast dance hall and this allows the cast to hand jive baby, and again it allows the performers at the back to shine as brightly as the leads.

Dan Partridge captures the jokey façade that is Danny Zuko but avoids hamming it up and impersonating Travolta, and therefore this is his character. He also highlights the vulnerability of this tough guy at key moments, which is really welcome.

Ellie Kingdon is not so “Hopelessly Devoted” to the Sandy of old, and she has the vocal chops to take that particular song and make it about feeling empowered.

I wish these two had more scenes together, and the dancehall scene would benefit from having Cha Cha cut in on them, as it does give the piece genuine drama.

Rizzo has always been a favourite character in Grease, and Tendai Rinomhota does not let the side down. She captures the public and private face of this complex character incredibly well.

Paul French’s Kenickie has the swagger, but also highlights how you might be the big shot in school, but what’s going to happen to you once the school gates are closed for good?

Alex Christian plays Doody with a real sense of fun and he comes into his own during the group dance numbers, rising to the challenge of the marvellous moves with ease and dexterity.

Marianna Neofitou’s Frenchy is as kooky and lost as you recall, and she is ably supported by Maeve Byrne’s Jan and Tara Sweeting’s Marty.

The stage is filled with remarkable talent, and you can see in their faces just how much joy they get from performing after being locked down and locked out of an industry they love for so long.

Peter Andre hams it up and piles on the cheese as Teen Angel and Vince Fontaine. He is a real crowd pleaser and clearly he gets bums on seats.

But his presence also means some fans film his segments and take pictures with their phones. This is not a gig and it distracts performers and other audience members who have paid to see the show with their eyes, not through a phone screen.

Jacob Fisher deserves a special mention, because he may not have the fan base that Andre commands but he has the vocal chops to deliver on the nights when Peter is not performing.

Some fans will not like this production, particularly if the film version is on repeat in their heads.

For me, it has the modern kick that this show needs and it is delivered with panache and guts. Grease is still the word.

Grease is at the Opera House until 23rd October. Tickets are available here.