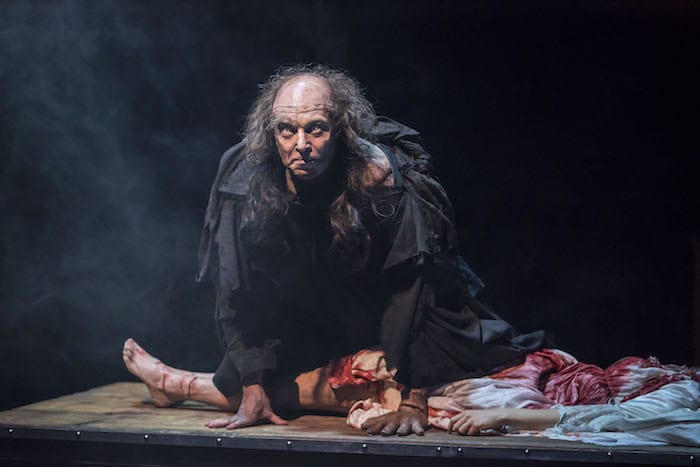 There have been countless interpretations of Mary Shelley’s classic novel Frankenstein on film and stage, most memorably by Hammer Films, Tim Burton, and Kenneth Branagh. Even the Carry On team and Mel Brooks have had a go.

The first thing that strikes you as you enter the beautiful and iconic Royal Exchange space is that the glass surrounding the grand structure is blacked out. This creates a sense of fear of the unknown, immediately. Something horrific is about to unfold.

Ben Stones’ brilliant set design houses a ship, the family home, and some frightfully realistic props, including a dead pig. Johanna Town’s lighting is dazzling, and when the lights go out, something wicked this way comes.

Mark Melville’s excellent sound design complements these technical marvels, and again, adds to the scares, of which there are plenty.

Most of these are provided by the talented Harry Attwell as The Creature. He is forlorn and frightened but is feared because of his appearance. He is stitched up both physically and metaphorically and becomes Frankenstein’s monster.

Victor Frankenstein is a quietly contemplative man in this production, far from the mad scientist in some film adaptations.

So far, so good. There are some genuine thrills along the way which elicit shrieks and laughter in equal measure.

There are a few niggles, though. Ryan Gage plays Captain Walton very well, as he engages the audience. His job, though, is to narrate, and April De Angelis’ adaptation is very wordy and filled with exposition. So characters have a habit of explaining a key plot point which is then played out.

This means there’s a great deal of repetition, especially about The Creature’s heartbreaking sense of displacement. I say heartbreaking, but once he mentions it for the fourth time, you long for some divine intervention and a bolt of lightning to strike him down.

Matthew Xia understands the gothic nature of the original text and much is made of this. But it is also slightly camp at times, which means that some serious scenes do make you giggle.

Shane Zaza’s Victor Frankenstein is so haunted by The Creature that he begins to see him everywhere so he runs up and down panting. And again and again. I’m afraid after the third round of panting I laughed, which is not the desired effect, but it is simply overdone and needs more subtlety.

That said, there are still plenty of thrills and dazzling touches to keep you entertained. Matthew Xia’s production of Frankenstein is as unpredictable as The Creature’s next move.

It’s bloody, not quite brilliant, but a bold attempt and, at times, a beautifully sketched visceral variation on the classic portrayal of the book. And it makes you jump.

And, thanks to Harry Attwell’s brilliant performance as The Creature, it’s definitely alive.

Frankenstein is at the Royal Exchange Theatre until 14 April.