Review: Educating Rita at The Lowry 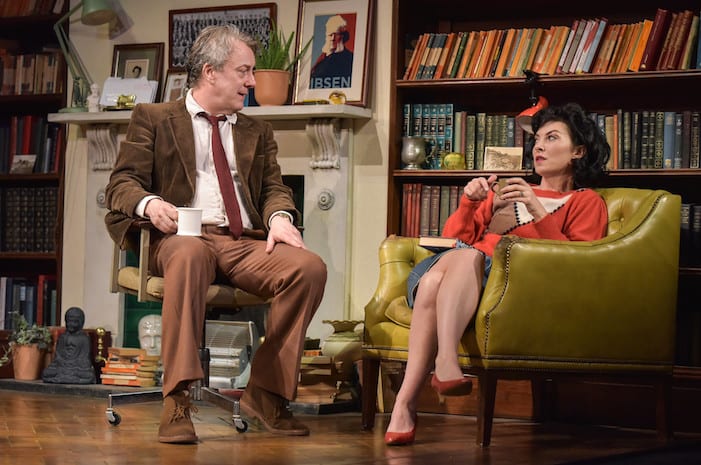 Educating Rita is perhaps best known to many as a film starring Julie Walters and Michael Caine about the conflicting values of education.

But it began life as a two hander play and has always worked wonderfully well, enabling the two actors to run through a gamut of emotions. You are always left amazed that you have watched the simple act of two people in one room.

Liverpudlian hairdresser Rita decides that it is time for a change. She has been washing and cutting hair and listening to her clients’ stories but she is thirsty for knowledge and wants to read stories written by the great and the good.

So she decides to enrol on an Open University course in English Literature. Her tutor Frank is cynical to begin with. Rita is canny and knows it will be an uphill battle, saying “But if you wanna change you have to do it from the inside, don’t ya’?”

Slowly but surely, Frank’s passion for literature and the likes of Ibsen, Chekhov and E.M Forster becomes more appealing to Rita than the cut-and-blow-dry routine of her life. But it comes at a cost because her husband Denny hates the fact that she is trying to better herself.

Willy Russell’s excellent play shows you how transformative education can be, especially when it is offered to someone later in life, or as a second, third, or fourth chance. As Rita blossoms, she changes in appearance and outlook whilst Frank deteriorates and begins to look dishevelled, thanks to the effects of the alcohol filed behind his myriad of books.

Max Roberts’ direction gives the play a natural feel and is so deft that it means you feel like a fly on the wall witnessing a butterfly emerging from a chrysalis, whilst another is dying from the inside.

Patrick Connellan’s superb set design shows two sides to Frank – the bookish academic to the outside world and the suffering alcoholic, and he wrestles with both of these.

Stephen Tompkinson is excellent as Frank, playing him as a tortured soul who sees Rita as a muse. But once he sees her change, he believes she has lost the essence of who she once was, and Frankenstein’s monster is then unleashed. You feel his pain and admire the man’s passion, but you know he is lost in a haze of whisky fuelled desires.

Jessica Johnson as Rita enters the play like a livewire and ends the piece as a new person. This is a real challenge for any actor. But with each fade in Drummond Orr’s striking lighting, she emerges with subtle changes to her personality.

And she has a gift for comedy. When Frank asks her if she has seen Chekhov in the theatre and she replies, “No, does he go?” the effect is heartbreakingly comic, as Rita is changing quicker than she realises but her earthiness remains. And Johnson can flip from comedy to poignancy in a heartbeat.

With tuition fees preventing some from going to university and arts-based subjects not being promoted by the government due to a lack of ‘academic rigour’, there is no better time to see Educating Rita.

Max Roberts’ production is as a good as it gets. This is an A grade piece of theatre which may make you ponder some difficult questions, but it remains an uplifting play which highlights the empowering impact a good teacher can have.

Educating Rita is at The Lowry until 4th May.