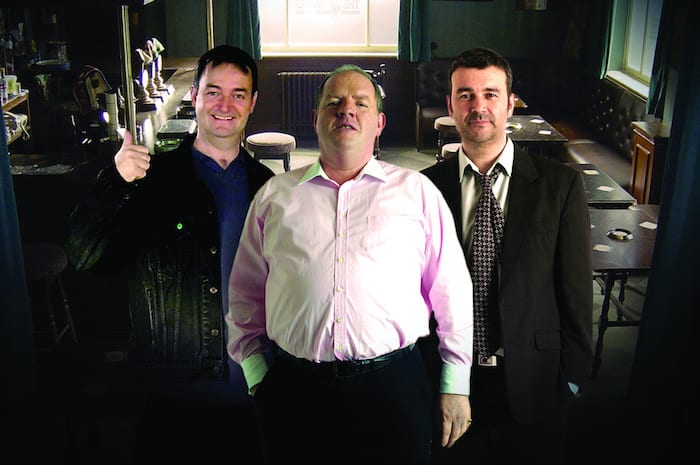 When I heard that Craig Cash and Phil Mealey’s comedy hit was coming to the stage, I was delighted, like many of the show’s fans.

The writing has always impressed me. It’s a wickedly funny show with a touch of Mike Leigh about it. Think The Royle Family, if they ever left their living room.

Like that other comedy classic, there has always been a fair share of poignant moments. If Mrs Brown’s Boys leaves you cold and you long for the clever comedy of Early Doors, you’re in for a treat. Because most of the regulars from The Grapes are back for this stage version, which sold out immediately at The Lowry.

Like the TV show, this production rests on the shoulders of the wonderful John Henshaw as Ken, the landlord of The Grapes, filling glasses, exchanging stories and having a go at barfly Tommy (played brilliantly here by Nick Birkinshaw).

Henshaw seems a bit nervous in act one and you can see why. The audience were shouting catchphrases on the night I attended. No doubt it’s because of the huge affection people have for the show, but it does take you out of the drama and could be unsettling for the cast.

Once he relaxes, however, Ken is back and he is just as lovable as you remember. Beneath the quips and the tough exterior lies a heart of gold. John Henshaw has always been perfectly cast in this role.

The story is a mix of things you have seen before with a few nice twists. The Ken/Tanya unrequited love story, which featured heavily in the TV show, is revisited here and leads to a few sweetly delivered moments, making the show more than a series of funny lines being delivered in a pub.

The only problem is that the show had time for characters to breathe and develop. Here, you have to know them and, if you do, you have seen many of these situations before. But there is something deeply nostalgic about seeing them again. It makes you feel like you’re arriving home to really familiar surroundings after you’ve been on holiday.

I loved Judith Barker’s Jean and Joan Kempson’s Winnie. Barker has stage experience so she knows how to work an audience and she does it brilliantly. And Kempson is as deadpan and brilliantly funny as she was on the TV show as the put upon Winnie, who always gets her revenge by doing very little work.

Replacing Joan and Eddie was always going to be a big ask. Neil Hurst and Vicky Binns play newcomers Freddie and June, but making theme exact photocopies makes you wonder why they are just not playing the original characters.

Phil Mealey and Craig Cash still have the great chemistry that makes Duffy and Joe’s relationship so engaging. And the two dodgy coppers Phil and Nige, the double act everyone remembers and quotes lines from, are revisited with such affection and smooth delivery by James Quinn and Peter Wright that you almost forget that they were away. And, yep, crime still won’t crack itself, although it has to as this pair are still never where they’re supposed to be.

There are attempts to make this more like a play than a TV show. So there’s a funny musical number and a few moments when characters speak to the audience under their breath.

But, in the main, this is Early Doors’ Greatest Hits. You get your favourite lines and scenes but with added laughter from the thousands of fans. The show never had canned laughter as it never needed any to convince you it was funny.

Liz Ashcroft’s set design is meticulous in its detail and the pub is lovingly created, as is Ken and Jean’s ornament filled home.

Caroline Jay Ranger directs with a sense of urgency so the pace rarely flags. This might have worked better for fans if three episodes were recreated because as it is you are not really getting something brand new.

But if the audience is as excited and involved as it was on the night I attended, there will be no complaints. This show has sold so well it’s heading to the Manchester Arena.

Enjoy, as I cannot see last orders being called here for a while.

And maybe it will come back to our TV screens for one more series. I bloody hope so. To the regiment!

Early Doors is at The Lowry until 22nd September but sold out. Tickets are available for the Manchester Arena on 4th October.