Review: Dogs n Dough – every dog has its day

The Manchester restaurant scene has seen a number of casualties recently, particularly in areas affected by the Metrolink works. Let’s face it, it has to be a factor.  We’ve lost Splendid Kitchen, Filthy Cow, Avalanche and the site formerly known as Grinch all in the same vicinity. Whilst it could be argued that perhaps their offerings weren’t as strong as others (and perhaps their grumbling about the tram roadworks on social media might have been a factor too), it can’t wholly be coincidence.

So colour me curious about those who are still going despite being slap bang in the middle of those works – and in the case of Dogs n Dough, even more hidden away than Filthy Cow or Avalanche could claim to be.

Yet it’s still here. Not only that, they’ve expanded into their basement with the cocktail bar 17 Below and I hear talk of expansion into further sites. 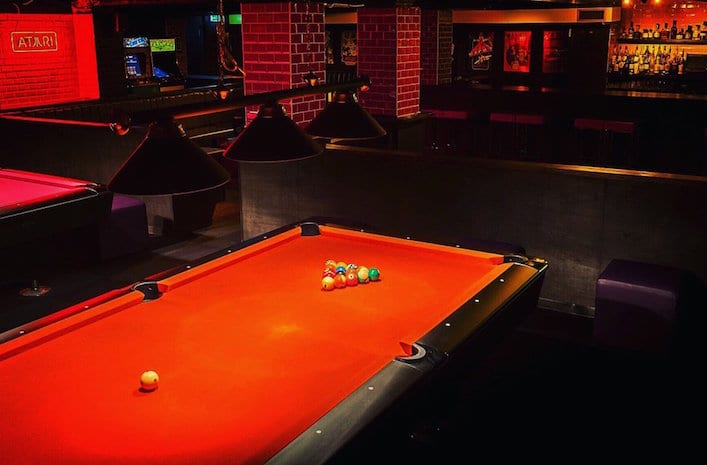 Perhaps it’s our obsession with American food that keeps it going, or that as soon as we walk down those stairs we are transported to a basement restaurant in Chicago complete with neon lights and 1980s soundtrack. But with Mancunian accents.

The drinks menu covers a little of everything. The wine list is surprisingly good and, as you’d expect, the beers have a distinctly US of A theme. Cocktails, too, nod to the culture of our American cousins with a number of drinks sporting film classic titles.

Some of the cocktails are a little sweet for my taste but, having sampled them once or twice, I can heartily recommend the Ron Burgundy (Scotch, apricot, cinnamon and peach) and my choice for this visit, the Doodle Dandy (Bourbon, cherry, maple and prosecco) – a surprisingly sweet and sour number that hit the spot. Plus, you know, cocktail cherry. 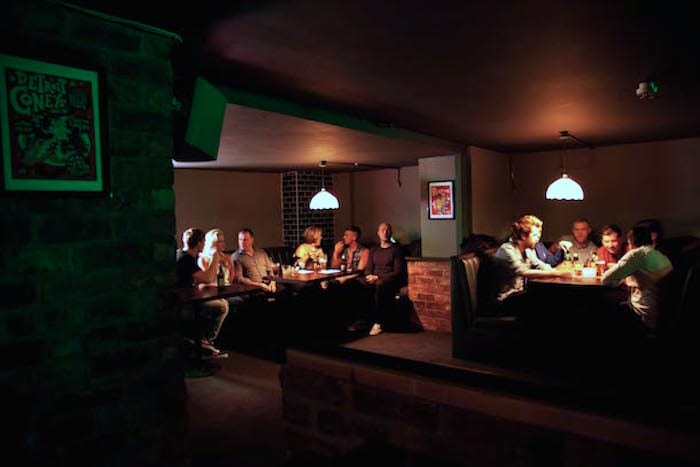 Their range of dogs span the classic Naked with optional fried onions, cheese and bacon, through to the loaded Farmageddon which was our selection – a smoked banger topped with rib of beef, pulled pork, fried chicken, crispy bacon and chilli cheese. Tastily over the top.

I’ll admit this wasn’t my first visit and, though I try something different every time I go, it’s always a mental battle to pull myself away from the New Yorker with sauerkraut. Still a favourite choice. If it ain’t broke, don’t fix it.

If you’re in need of a carb hit, the Triple Threat from the pizza menu is a popular choice – pizza topped with fries and cheeseburger. There’s a reason it’s still there from the original menu that came into being three years ago. On this visit we sampled the Texas Pete pizza – rib of beef, nacho cheese, sour cream and red onion. Again, maybe not my favourite, but tasty nonetheless, the sharpness of the sour cream cutting through the beef and cheese.

Today feels like a Pepperoni and Triple Threat kind of day! Open now for some #hotdog and #pizza fun! pic.twitter.com/9KzPa0tp9h

If you need a side – and who doesn’t – their loaded fries are the things dreams are made of, particularly if you’re on a low carb diet. Cheese smothered, chilli covered, or dusted with buttered breadcrumbs in the case of the Kiev, sharing is essential.

Pastrami, cheese, pickles and mustard top the NY Fries – our selection for the evening – and one that saw us fighting over the little chunks of cheese covered pastrami.

If you have room there’s the dessert pizza option. Top savoury pizza dough with Nutella, mini marshmallows and sweet treats of choice – Malteasers, M&Ms, Chocolate Buttons – and further top with chocolate, strawberry or toffee sauce. Luckily, all the pizzas come boxed, because more than a slice is some sort of victory, and you’ll inevitably end up taking home a doggie bag.

But sometimes, that’s not what it’s about.