REVIEW | Chicago at The Opera House 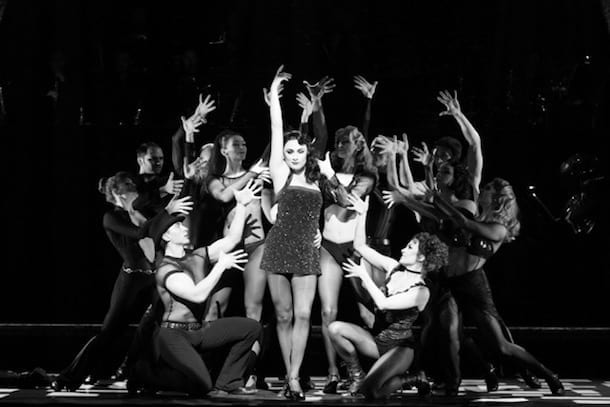 How do you give murder the razzle dazzle treatment? Simple. Start a theatre production with the words, “Murder, greed, corruption, exploitation, adultery and treachery…all those things we hold near and dear to our hearts.”

“It’s a place
where fame
and celebrity
are valued
over truth and
justice. Sound
familiar?”

The curtain rises on a desolate stage, which quickly fills with dazzling, lightly clad dancers who move like puppets and who appear disheveled, tawdry and almost zombified. Welcome to the sleazy, easy world of 1920’s Chicago when prohibition was a national obsession. It’s a place where fame and celebrity are valued over truth and justice. Sound familiar? There’s little value for life and murder is commonplace. The Windy City is a cross between the neon gaudiness of Times Square and a purple-hazed prison.

The plot is based on real events – the story of nightclub singer Roxie Hart (Hayley Tamaddon) who is arrested and jailed for shooting her lover. In the women’s block of Cook County Jail, she and fellow murderess, vaudeville star Velma Kelly (Sophie Carmen-Jones), enter into a bitter rivalry for the limelight, the headlines, and smooth talking lawyer Billy Flynn (John Partridge), as they fight to keep from death row.

Billy’s appearance and personality resemble that of a Barnum-style showman who believes that things might have turned out differently for any high class gangster or celebrity if he had defended them at their trial. It’s feathers galore when he performs All I Care About.  He plays the press and jury like an orchestra conductor to win freedom for Velma and Roxie. Billy’s other big number Razzle Dazzle shows John Partridge’s showmanship off as he struts his stuff with cane in hand.

The story moves quickly along when Hunyak, a Hungarian, goes to her execution still protesting her innocence despite being a victim of a miscarriage of justice. Roxie plays the courtroom like a magician using every trick in the book as she starts to realise that standing trial for shooting her lover in cold blood may be the showbiz opportunity she has always longed would come her way.

But it’s not all downbeat stuff. Sam Bailey’s corrupt Mama Morton is a breath of fresh air as a brazen hussy belting out When You’re Good to Mama and Hayley Tamaddon’s minxy Roxie is delightful, her velvety voice, well supported and complemented by Sophie Carman-Jones as Velma. Neil Ditt as Amos also deserves a mention for a great rendition of Mister Cellophane.

A D Richardson is the surprise of the night playing Mary Sunshine. A Little Bit of Good received great applause.

The original choreography by Bob Fosse was revolutionary in its time, but Ann Reinking, Gary Chryst and Dean Street give it a makeover, placing more emphasis on the contrast between appearance and reality, the illusion of theatre itself and the circus of justice. The sexy, sassy score includes Cell Block Tango, I Can’t Do It Alone and We Both Reached ForThe Gun and, of course, All That Jazz.

The company are talented performers who bring the show to a grand finale, and whilst this is not a family show and should perhaps come with an 18 rating, it’s one not to miss during its run till 2 April.