REVIEW: By Far The Greatest Team at The Lowry

Few things have the power to divide us or bring us together more than football. 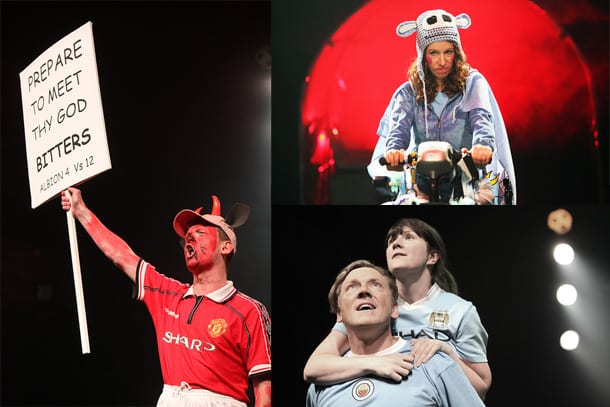 Few things have the power to divide us or bring us together more than football. It can make us happy and make us cry, make us love and make us hate.

By Far The Greatest Team (The Lowry until Sunday) explores our relationships with the clubs we support and with each other. It’s performed in the round, just like a real football stadium, with a pitch at the centre surrounded by a near capacity crowd. Quite a few people are wearing their colours and one person is wearing a half and half scarf. There’s always one.The actors emerge from a tunnel.

This is a play of two halves. Or four quarters to be more precise- four short plays written by two United fans and two City fans

The evening kicks off with We’re Not Really Here by Ian Kershaw, a play which explores the ugly side of the beautiful game. It revolves around a confrontation between two generations of City fans- Sam, a young fan who thinks supporting City is about singing Munich songs and beating up United fans with a cricket bat and Helen, an old school bell-ringing supporter who tries to teach him what being a real supporter should mean. This is a very powerful piece which is meant to shock and succeeds and features impressive performances impressive performances from David Judge and Meriel Scholfield.

The first half concludes on a lighter note with Stretford End by Lindsay Williams, which asks if there are more important things in life than football. It takes place at Old Trafford where Robbie and Dunc are watching United play Swansea in Sir Alex Ferguson’s last home game as United manager. It’s the end of an era and they reminisce about their favourite United moments under Fergie. They are joined by a third fan, Sal, and as the play unfolds there’s a surprising revelation about their relationship with each other. A very funny short play with a slightly disappointing last line.

The second half continues in a similar vein with The Good, The Bad and the Giggsy by Andrew Sheridan, another very amusing play about Albion, a United fan, and Eileen, a City fan, who engage in verbal fisticuffs about each other and the merits of the teams they support. There’s another surprising revelation about their relationship with each other and a message that, despite the superficial differences between them, beneath the facepaint and colours they are actually very similar people.

The evening concludes with Only Football by Sarah McDonald Hughes, a beautifully written exploration of the relationship between Abi and her father Gary, and how football can be a positive force for bringing people together. This is probably the play United fans will enjoy the least as it relives the last few minutes of the 2011/12 season when City nicked the Premiership from United’s grasp.

Does By Far The Greatest Team work? Yes it does. Staging a production of four short plays about football is not easy but Monkeywood Theatre pull it off and there are some excellent performances from a talented cast. A few more banners decorating the theatre wouldn’t have gone amiss but that’s a minor quibble. You don’t have to be a United or City fan to enjoy By Far The Greatest Team but it may help.