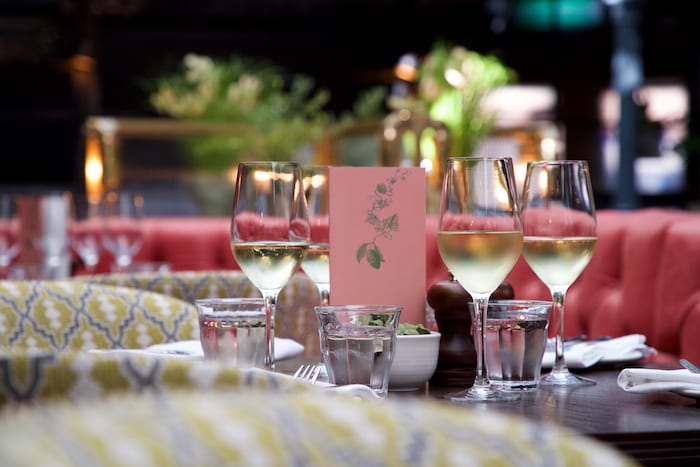 Airport hotels, eh? Same the world over. Restaurants with a captive audience of disinterested in-transit diners, often eating alone while reading a book or tapping away on a keyboard.

Then there’s the Manchester Airport Marriott. In a very cute move, the hotel, adjacent to the M56 roundabout in Hale Barns, has not one but two destination restaurants. They’re not just for travellers. They will also appeal to people – indeed families – who aren’t going anywhere near a plane.

The Marriott has been home to San Carlo Fiorentina for some years. Now, virtually next door, Greater Manchester’s first branch of Brasserie Blanc has opened for business.

Judging by our visit, early evening on a Thursday, acclaimed chef Raymond Blanc’s latest venture is proving to be an instant hit. The place was buzzing with a lively cross section of locals, many with children in tow, as well as prospective airline passengers, creating a lively, animated ambience in a splendid setting. 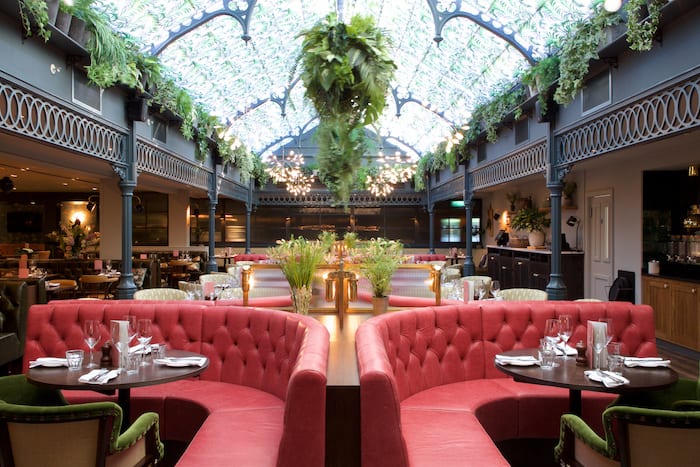 Between the attractive bar and the open kitchen, tables and fuchsia leather banquettes are laid out beneath a spectacular, cast-iron framed atrium – a space which we knew as Smollensky’s steak house, back in the day when the hotel was the Four Seasons.

There’s al fresco dining on the terrace, too. But the heat of the evening demanded the comfort of the inside air-con.

The summer menu has been devised by Raymond Blanc and the Brasserie Blanc team led by his long-time colleague Clive Fretwell, former head chef at Le Manoir aux Quat’Saisons, whose sojourn in Manchester at Nico Central (in the Midland Hotel) was all too brief.

It’s a clever combination of French classics and dishes from farther afield inspired by Raymond’s extensive travels. Inspired turns out to be the entirely appropriate word. 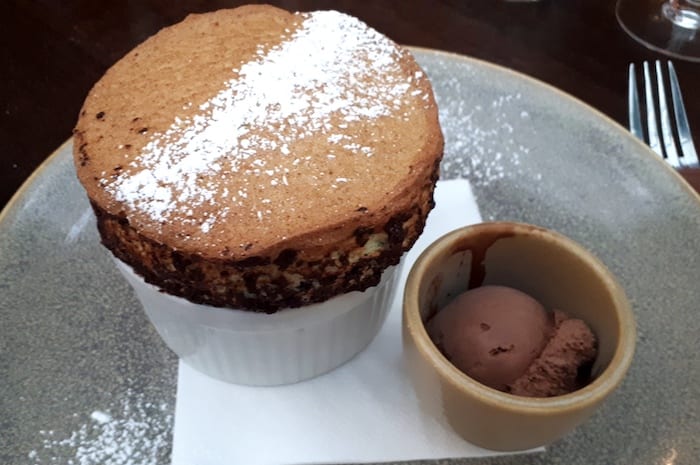 So let’s start with the puddings, in the style of flamboyant American boxing promoter Don King – he of the electric shock hairstyle – who, I was told by Bruno, long time head waiter at the Midland French, always ate his dinner in reverse, starting with dessert.

No, we didn’t start the meal by eating pudding. I want to start by describing pudding, so often an afterthought even by top chefs. No so here. They were exceptional and a clear indication of the talent at work.

My pistachio soufflé (£6.90) was a stunner of a Raymond Blanc classic. Fluffy and lighter than a feather, the delicately-browned outside yielded a glorious green interior. The advice was: make a hole in the top and spoon in the scoop of gorgeously rich chocolate ice cream. Simply divine.

Mrs K was no less gushing about her coconut rice (£6.90) with fresh mango, mango sorbet, minted passionfruit coulis and coconut crisp; as cool, fresh and flavoursome as you like. 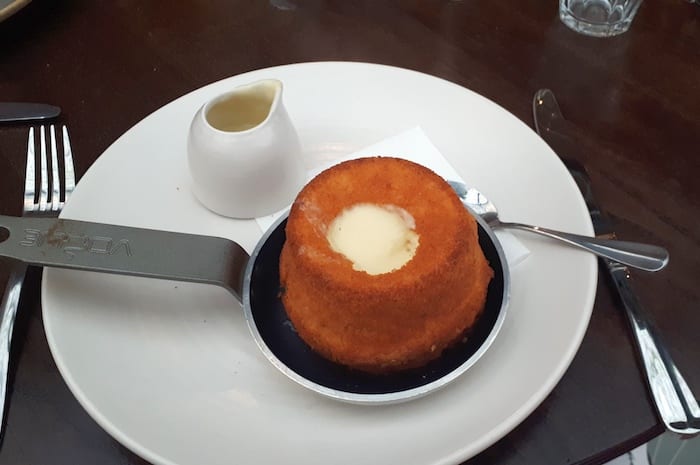 Back to the beginning. I actually started with another soufflé. Yep, two soufflés in a single meal – which put me in mind of Julie Walters’ hilarious ‘Two soups’ sketch, second only to the Two Ronnies’ ‘Fork ‘andles’ in the annals of British comedy.

Anyway, the soufflé was superb. This time the Brasserie Blanc cheese souffle (£6.95), with the texture of a cheddary cloud, came on a dainty skillet with a tiny jug of warm Ford Farm Coastal Cheddar sauce to pour into the top. Wow.

Mrs K had the potted Cromer crab and avocado (£8.50). Which may not strike you as particularly French but, as crab doesn’t come any better, probably inspired Raymond on his travels to the coat of East Anglia. Brilliant coral in colour, the crab was rich and delicious mixed with creamy avocado, ready to spread on crunchy sourdough toast and prawn butter. 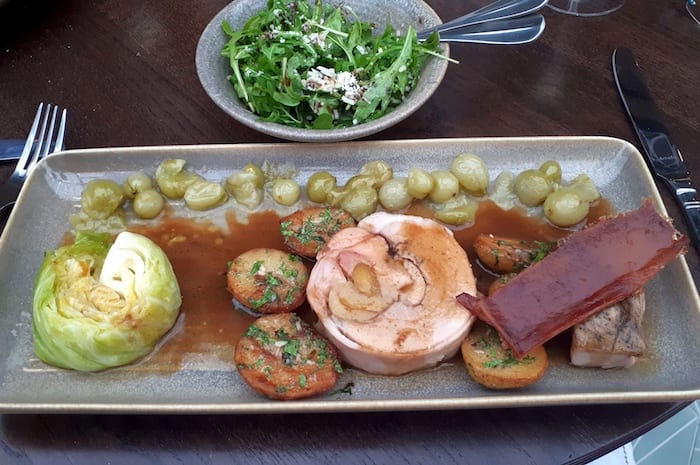 The mains were top notch, too. I chose slow-cooked (22 hours at 60C) shoulder and leg of meltingly tender roast suckling pig, stuffed with apricot and artistically arranged on a big rectangular plate with perfectly-done hispi cabbage, sautéed potatoes, delicate caramelised pork crisp, tangy gooseberry compote and rich pan juices. Sooo good, and worth every penny of its £19.50.

Opposite, the blonde had Raymond’s travel-inspired Malabar fish curry with toasted coconut (£15.50). 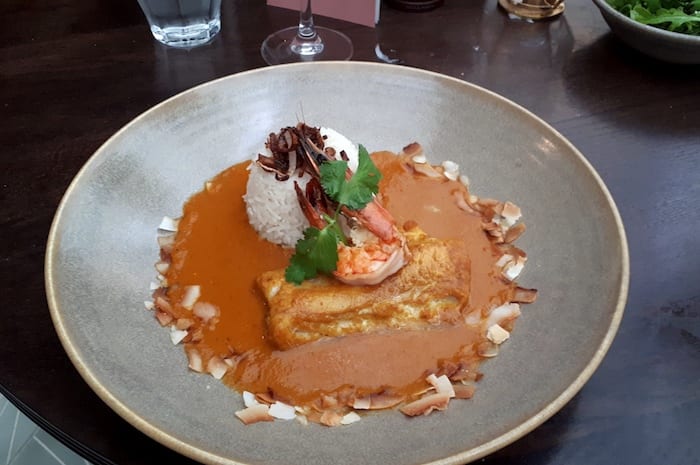 From a French-dominated wine list we chose a bottle of fresh, soft, green apple-y Languedoc Chardonnay for a modestly-priced (as was the whole of the meal) £22.

At the launch, Monsieur Blanc had said: “We hope the new Brasserie Blanc will become a firm favourite, not just with those jetting off on holidays but also, most importantly, with the local community too.”

I think you’ve nailed that one, Raymond. Voila.