A place that doesn't exactly stand out from the crowd. 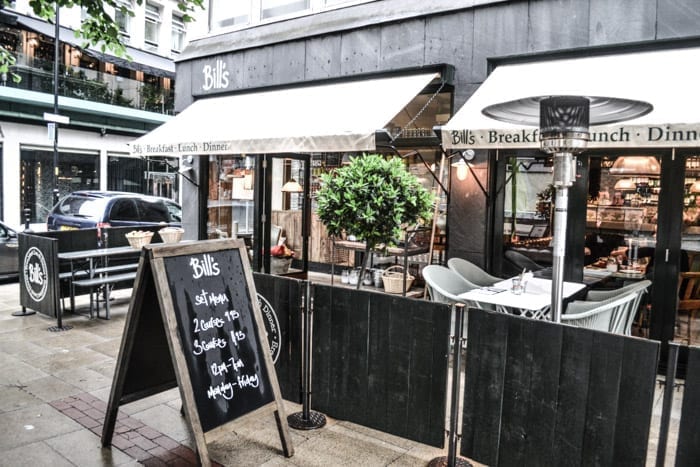 It’s almost a year to the day since Bill’s opened on John Dalton St and we have to admit it’s a place that passed us by. So by way of an apology we popped in for a very late lunch/early dinner this week.

Bill’s wasn’t busy when we called but not many places are at 5 o’clock on a wet Manchester Monday afternoon. Some places don’t even bother to open on Mondays, so at least it’s a start.

‘Most restaurants are
niche and specialise in
a particular cuisine
or type of food.
The menus at Bill’s are
breakfast-to-bedtime’

It’s an eclectic menu with more than a nod to the Mediterranean and decor to match. It’s easy to imagine how this would be a very pleasant place to eat on a nice summer’s day with the glass window facade doors open or maybe even alfresco on the terrace watching the world go by. Sadly, it’s chucking it down and the doors are closed, but that doesn’t matter because it’s a light, airy, relaxed place with something of a holiday feel. We were hungry and ready to chow down.

Most restaurants are niche and specialise in a particular cuisine or type of food. The menus at Bill’s are breakfast-to-bedtime with a huge choice of dishes to cater for practically every taste from traditional (fish pie, steak) to dirty (burgers, mac ‘n’ cheese) to squeaky clean (crunchy kale leaf salad) and any time of day. Prices are middling.

My companion’s Bill’s chicken and chorizo (£10.50) was served in a toasted sesame seed bun, with tomato, red onion, gem lettuce and avocado mayo, and skin on fries on the side. Succulent, textured and enough chicken to fill the bun – and some.

For dessert he chose treacle tart (£5.50) with honeycomb ice cream and caramel sauce which he described as delicious. Well-balanced flavour and wonderful contrast between the soft warm tart and ice cream – real comfort food.

Jaffa cake alert. If you are a fan of the jaffa cake-and who isn’t?- try one of Bill’s (£2.55). It’s probably the biggest and best jaffa cake you will ever taste with an orangey bit in the middle that’s so smashing that you may never eat a mass produced jaffa cake again. Loved it.

Bill’s is a nice enough place and the food is, too. Had it arrived in Manchester ten years ago it would probably have stood out from the crowd. It probably still would in a small town. Funnily enough, that’s exactly how it started. Funnily enough by a man called Bill, who opened a food store and cafe in Lewes near Brighton which became so popular and so successful that it became the talk of the town. Bill was bought out and his cafe became a chain of over 60 restaurants.

From the handwritten-style logo to the shop selling Bill’s own label products to take away (the dark chocolate with salted almonds is excellent, by the way), the Bill’s brand seems to be all about replicating the homeliness that made the original restaurant so successful.

But this is Manchester in the middle of a restaurant boom which shows no signs of abating. It feels like there’s a restaurant on every corner and a new one opening every day. The competition is fierce.

So we wish Bill’s a happy first birthday. Can it cut the mustard? We’ll have to wait and see.