It’s ok if you don’t know her name – because after this you’ll never forget it.

Maxine Peake’s heartening story of the British championship cyclist, Beryl Burton, aka ‘the woman on two wheels’, is captivating audiences at Oldham Coliseum with its snappy Yorkshire wit and motivating message: ‘mind over matter’.

Beryl (Elizabeth Twells) has her story anchored in Leeds, where we first see her keen to start her 11-plus exam. However, her nerves are so shaken that it brings out an underlying diagnosis of rheumatic chorea. 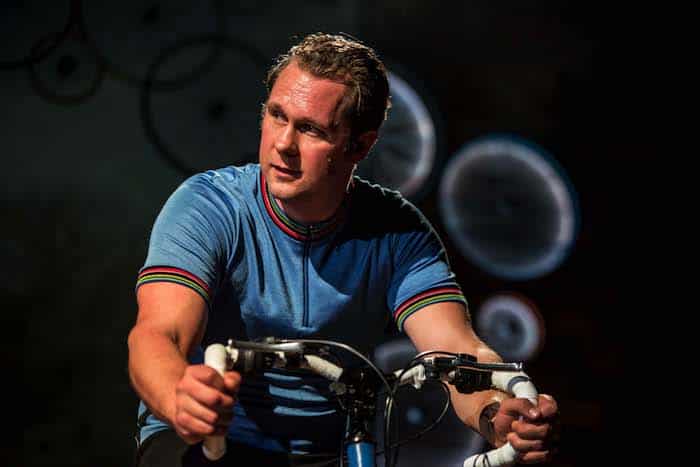 She doesn’t let this slow her down, though, and we next see her at 17 with a job at a local clothing factory where she meets her warm-hearted husband, Charlie Burton (James Lewis).

Charlie happens to be a cyclist and invites Beryl to join the local cycling club, setting up base for years of achievements and hard work that would give Beryl the title she has today.

Charlie’s love and dedication to Beryl is of great importance throughout Beryl’s story as he devotes his life to being her right-hand cycling man.

We even see how Beryl and Charlie’s daughter, Denise (Tori Burgess), follows in her famous mother’s footsteps and begins competitive cycling, even facing her mother in a few competitions.

Throughout her story, there’s one thing that Beryl won’t let slow her down- life.

From her diagnosis, to pregnancy, and various, serious injuries, Beryl is determined to dominate the sport of cycling, setting an example to women everywhere who don’t think they’re good enough to ‘make their mark’.

The assuredly talented cast of four give Beryl’s story the heartbeat it deserves as they deliver a warm, hilarious, emotional, and riveting portrayal of this amazing woman.

A crowd-favourite on the night we went was the policeman-cum-concierge-cum-doctor (Charlie Ryan), as his versatility during each role sparked laughter every time.

With a beautiful set built from bikes which were donated by the amazing Huddersfield-based charity Streetbikes, you really feel as though you have a front-row seat into the life and soul of Beryl Burton.

Her life is an inspiration to women everywhere. With over 90 competitions under her belt, and an iron will, Peake’s production ensures that Beryl’s story receives the praise it deserves.

Though Beryl’s story is one that is, sadly, not well-known, even to those close to home, this production strives to ask the question of why that is and delivers a flawless portrayal of everything that makes Beryl, to this day, a national icon.

Beryl is at Oldham Coliseum until Saturday 21st May 2022. Tickets are available here.