Review: Beautiful – The Carole King Musical at The Palace Theatre 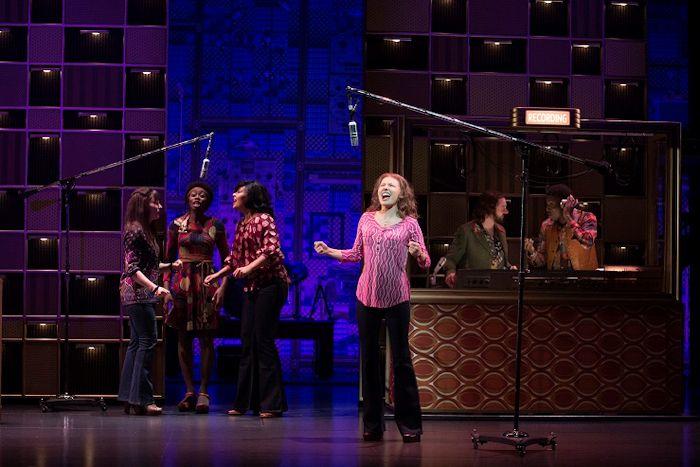 Imagine being in a pub where the only music on the jukebox is The Spice Girls.

It probably wouldn’t be the most popular pub in town – apart from with The Spice Girls’ fans. Both of them.

That’s why I’m not a fan of jukebox musicals.

There hasn’t been one about anyone whose music I like enough to want to sit through a two hour show about them.

I couldn’t sit through a Rod Stewart album so why would I pay for the privilege of sitting through two hours of Tonight’s The Night? The same goes for the Four Seasons, Madness, Queen and every other jukebox musical that’s ever been made. Especially Viva Forever! the Spice Girls musical.

It’s not just the music. They don’t have to be any good to get bums on seats. They just need a big enough fanbase. So the plots are often ridiculous and contrived so they can  shoehorn as many songs in as possible.

But you can’t condemn an entire genre unless you’ve seen one. Don’t knock it till you’ve tried, it as they say.

Which is why when one came along about Carole King, I decided to give it a try because I knew at least the songs would be good even if the rest of it wasn’t.

Carole King is not an obvious choice for a jukebox musical. Most baby boomers will have a well worn copy of Tapestry, one of the best-selling albums of all time, in their collection.

But Tapestry is just a fraction of her output.

How many people – even baby boomers – know that she was also a prolific writer of hits for other performers and was responsible for some of the greatest pop songs ever written?

By the time she was twenty she was writing number ones for the biggest acts in rock ‘n’ roll, including the Drifters, The Shirelles, Aretha Franklin and the Monkees.

Over the next 10 years, she wrote some of the ’60s’ biggest and best songs with husband Gerry Goffin. The Beatles, Herman’s Hermits and the Monkees all recorded her songs.

The plot of Beautiful is simple. It tells the story of how King fought her way into the record industry as a teenager against the advice of her mother who tells her “girls don’t write music, they teach it.”

How she sold her first hit when she was just seventeen and found work writing three- minute pop songs for teenagers in a Times Square hit factory.

As you might expect, it features lots of her songs including I Feel The Earth Move, It Might As Well Rain Until September, You’ve Got A Friend, You Make Me Feel Like A Natural Woman, Will You Love Me Tomorrow, and It’s Too Late.

And as if that’s not enough, it also features such Mann/Weil classics as You’ve Lost That Lovin’ Feeling and We Gotta Get Out Of This Place.

How’s that for a jukebox?

The show is beautifully produced and performed by the cast. Bronté Barbé has a great voice and is excellent in the lead role. Bravo Bronté.

She is more than ably supported by the rest of cast, especially Amy Ellen Richardson as Cynthia Weil. There are Stars In Their Eyes-style performances by the ensemble as the Drifters and Shirelles. And the songs don’t feel like they’ve been shoehorned into the show. It all flows beautifully.

It’s not a challenging evening but that’s not what you expect from a jukebox musical. But it is a very entertaining one.

Not a fan of jukebox musicals? Don’t knock it till you’ve tried it.