Review: Bat Out of Hell The Musical hits all the right notes at Opera House 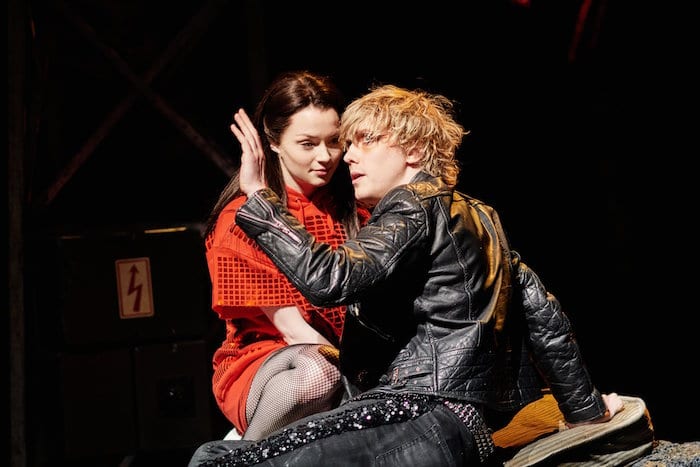 Meatloaf’s Bat Out Of Hell has sold more than 43 million so far and still shifts more than 200,000 copies annually. So how do you turn one of the biggest selling albums of all time into a musical? With motorbikes, real fire and one of the most elaborate sets I’ve ever seen, that’s how.

Bat Out Of Hell The Musical brought it all on opening night at The Opera House last night. Written by Jim Steinman, the producer of the original record which was inspired by Meatloaf’s love of Bruce Springsteen and Wagner, it certainly is an ambitious undertaking. And all eyes were on Manchester where the show premiered before heading to London.

The musical manages to follow the story behind the 1977 concept album, making it accessible to people who may never have heard the songs before. It’s a tale of teenage angst turned epic, following Strat (Andrew Polec) and his group of bike-toting rockers, as he falls in love with Raven (Christina Bennington), an 18-year old girl trapped in an American nightmare of obsessive parents and excess.

It sounds simple but the ambitious set works to magnify every emotion going. A built-in escalator, cavernous tunnel, a suspended room and mounted cameras beam this multi-level activity onto a big screen recreating the claustrophobia and crush of teenage surburbia so well.

The set, designed by Jon Bausor, who has worked on many large-scale productions before including Bugsy Malone, was months in the making and it shows. I have never seen anything like it.  An elaborate construction of the American dream gone grotesquely wrong – and to great effect.

It would easy for the story to stay focused largely around the rebellious Strat and his sense of having no one, especially as the energetic Andrew Polec engages utterly with the role.  Strat hovers from bold biker to tender lover but rather than mimic Meatloaf, Polec brings his own dynamism to the character, embracing the free spirit of the music.

The show is all about breaking boundaries and enjoying sweet release and, thanks to an energetic cast and the enigmatic Raven, the music manages to weave into a number of subplots. Dance helps to drive it forward, a significant achievement by Emma Portner, the youngest woman in history to have choreographed a musical.

Comedy is interlaced with contemporary comment on marriage in the relationship between Raven’s parents Falco (Rob Fowler) and Sloane (Sharon Sexton) using the well known track Paradise By The Dashboard Light to explore their passionate past.  Performed as a sensuous duet which involves a striptease, a parked car and running commentary, it reveals a great rapport between the actors.

Yes, there is cheese, but it’s well rounded. Think a whole Stilton rather than a slice of own brand Cheddar.

The first half of the show contains many memorable songs – classic after classic. All Revved Up And No  Place To Go, Wasted Youth and Who Needs the Young? are all in there backed by a live band.

But is it a case of too much, too soon? Well perhaps it is but rightly so. Meatloaf’s album was considered ahead of its time for its exploration of fame, excess and controversy, so magnifying this in musical form brings back the sense of scandal which originally accompanied the tracks.

It’s alluringly naughty and hits you hard. A car falls into the orchestra, inches from the sears, with band members getting on stage  to wave their mangled instruments – an excellent piece of comic timing.

Party poppers are also fired into the crowd (one hit my shoulder) as part of Raven’s eighteenth birthday celebrations, and members of the audience were covered in silly string, glitter and streamers during the course of the night. And then there was blood.

Yes, that’s right, blood. The first half ends with a passionate, powerful rendition of the title track Bat Out Of Hell, showcasing both Polec and Bennington as highly capable vocalists as well as actors. It would have been wrong for the interval to be preceded by any other song, and it certainly was an immersive experience with jets of flame, showers of confetti and blood dripping from Strat’s front.

The first half went out on such a high I was left wondering how the second part could live up to it. But it did, picking up on some of the sub-plots from the first half, including the intense relationship between Zahara (Danielle Steers) and Jagwire (Dom Hartley-Harris) and, of course, the loveable Tink (Aran MacRae).

Steinman has managed to craft a musical not ashamed of of its melodrama and capable of portraying characters with whom we can empathise.

The tracks It’s All Coming Back To Me Now and I Would Do Anything  For Love make for an intense finale.

I left feeling satisfied. This is a musical that hits all the right notes.