Review: 9 to 5 the Musical is hilariously funny and entertaining

The classic comedy is brought to stage once again in this tale of misogyny, revenge and female empowerment 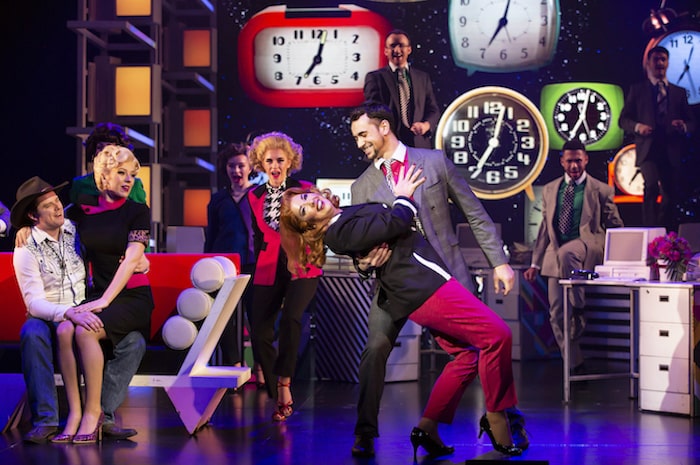 Adapted from the beloved 1980 movie, Dolly Parton’s 9 to 5 tells the story of three female office workers who come together to rise up against their misogynistic boss.

The movie was certainly progressive for its time, tackling social issues centring around sexism females face in the workplace.

The musical, currently at the Palace Theatre, is still set in the 1980s and you could argue, where certain parts of the story haven’t aged well, the show still does justice in carrying the message of female empowerment.

The show begins with a pre-recorded video where Dolly Parton sets the scene, before singing along with the cast.

This actually works well and it never feels clunky when Dolly appears on screen, as the show keeps moving at a good pace.

In this latest production, TV star Claire Sweeney takes over from Louise Redknapp as Violet Newstead.

She leads the cast with an exceptional performance, delivering an excellent portrayal of the character whilst demonstrating her brilliant vocals.

Vivian Panka makes her UK debut as Judy Bernly and really shines in the role, nailing every funny moment and excelling vocally.

Stephanie Chandos completes the trio as Doralee Rhodes who, again, performs each of the show’s numbers brilliantly, conveying the American southern drawl convincingly.

This portrayal by Chandos is really enjoyable to watch. She manages to add her own flavour to the character, which never makes it feel like you’re watching a Dolly Parton tribute performance.

The show is packed with brilliant music, all by Parton. Standouts include the show’s opener 9 to 5, Get Out and Stay Out and Here for You.

Patricia Resnick’s book is skilfully directed by Jeff Calhoun, who succeeds in telling the story at a good pace which enables the show to never feel drawn out.

There are a lot of hilarious moments that the audience seem to love, including the dynamic between Roz and misogynistic boss Hart as well as the scenes which feature the trio, who all have great comedic timing, all together.

Sean Needham plays a great Franklin Hart Jnr, who performs each of his songs well.

He too has a great sense of comedic timing which will leave audiences in tears, especially during his hysterical performance of Here for You. However, his American accent seems a little confused.

Throughout this performance, she absolutely makes the character her own, excelling in each of the comedic scenes alongside Hart in addition to adding gravity to her more emotional parts, which are great to explore.

There are plenty of full ensemble songs throughout the show, which Lisa Stevens’ well executed choreography complements.

This is unapologetically a period-piece, and despite some of the character stereotypes, which some may find trying, the performance thrives in its advocacy for equal rights, which makes it hard not to like.

With plenty of gags and a revenge story that’s too good to be true, this musical feature stunning vocals and music by Parton which will bring you off your seat.

Ultimately, 9 to 5 succeeds in entertaining.

9 to 5 the Musical is at the Palace Theatre until Saturday 5th March. Tickets are available here.