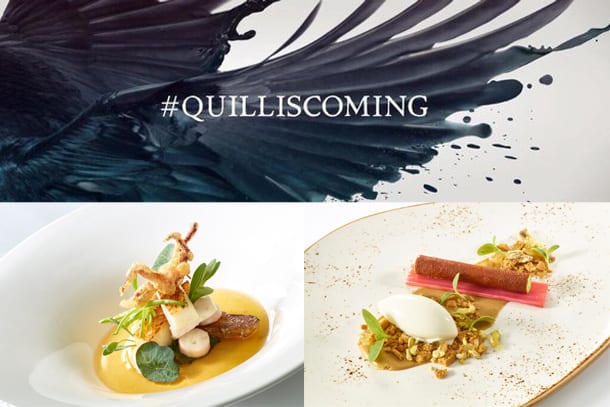 The award-winning design team behind Quill, Manchester’s newest exclusive fine dining restaurant and bar, have shared some of the secrets behind the interior of the new venue ahead of its highly anticipated VIP opening tonight (Thursday) and its official opening to the public tomorrow from 7pm.

There has been much speculation surrounding the new King Street venue since its opening was announced a few weeks ago, but now specialist bar interior design company Collective Design has revealed more information on what promises to be a truly exclusive city centre spot.

“Some of the
aspects of the
restaurant and
bar are truly
spectacular
using materials
that create an
iridescent finish
oozing luxury.”

Simon Mcilwraith, a past winner of the Interior Designer of the year 3 years running at the Northern Design Awards, who is heading up the project, has described the new restaurant as “stylish” “bespoke” and “very high end”.

“While we don’t want to give too much away at this stage we can say the design features a lot of bespoke elements that really tell a story following a theatrical style and relate closely to the concept of ink and the quill. Some of the aspects of the restaurant and bar are truly spectacular using materials that create an iridescent finish oozing luxury.

“I would describe it as contemporary utilising the best urban materials and a unique finish to create a really stylish venue”.

Other features already revealed include first floor dining with an exclusive private dining area seating up to 21 people, an open kitchen giving diners the chance to see head chef Curtis Stewart and his team in action, a ground floor bar with cocktail stations and a cosmopolitan terrace area. The ground floor bar is truly the place to be seen.

The restaurant will serve an a la carte and 8-course tasting menu and the food has been described as modern British cuisine, with European influences.

The transformation of the King Street venue has cost more than £1.5 million and is the latest investment by On The Wall Group. CEO Chris Longmate said the excitement was building as the opening night gets closer.

“The opening night of Quill will be a night to remember,” he said. “The interest and intrigue surrounding Quill is making the run up to the event all the more exciting and we can’t wait to see people’s reactions when they step inside the venue.”

We can’t wait either.

For more information on Quill or to reserve your table visit www.quillmcr.co.uk or @QuillMCR