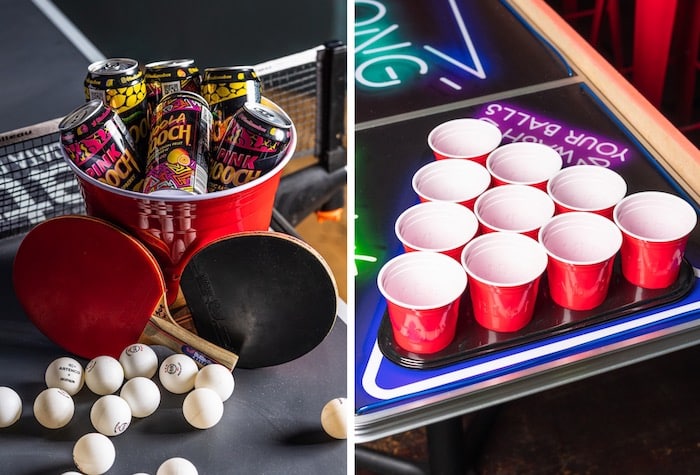 The first prize will be the two winners’ combined height in Hooch cans, plus a free booking of Hooch pong for a later date
Share
Tweet
Share
Chat

Manchester’s retro games bar Pong & Puck have teamed up with Hooch for a fun, throwback weekend this summer with tournaments, prizes, and all things 90s.

Starting with a Hooch pong tournament on Friday 12th August, from 5pm-9pm, players can pair up to try and win one of three zingy prizes.

The first prize will be the two winners’ combined height in Hooch cans, plus a free booking of Hooch pong for a later date.

The second prize will be the tallest player’s height in Hooch cans and a free booking of Hooch pong.

For the third prize, three cans of Hooch and a free booking of Hooch pong will be up for grabs.

If that wasn’t enough, Pong & Puck will be selling two cans of Hooch for £8 all weekend.

There will also be a £100 bar tab up for grabs – check out the Instagram competition over on @pongandpuck.

And guests can expect a throwback soundtrack of guilty pleasures all weekend, too.

They also run a bottomless brunch – the first in the city to include prosecco pong – on Saturdays and Sundays from 12pm-2pm, plus Wednesdays from 5pm-7.30pm, offering group games, pizza and unlimited drinks.

Alongside classic lemon, passion fruit and mango and raspberry lemonade flavours, this summer, Orange Hooch, a sparkling alcoholic orangeade originally part of the nostalgic alcopop wave of the 90s, has returned to UK stores as demand for orange flavours surges across the country.

The Hooch weekend takeover is taking place from Friday 12th to Sunday 14th August 2022 at Pong & Puck, Great Northern Warehouse. The weekend will start with a Hooch pong tournament on Friday 12th from 5pm-9pm. Teams of two can compete to win three prizes, including free Hooch cans and Hooch pong bookings. Find out more about the Great Northern here.