Leeds’ massively popular barbecue joint opened a branch in Manchester earlier this year. In the building that was once the Dome on Lloyd Street, Albert Square, and then the fish place Livebait – Red’s True Barbecue now gloriously serves up steaks, burgers, ribs and chicken.

“If you’re brave and have the appetite of a wild boar, un-cross your knife and fork…”

We attended the theatrical, all-hands-on-deck, flash-mob-singing, shindig of a press launch. Difficult to make a fair assessment of the normal Red’s experience under such conditions, we went in after it had settled down a bit.

Upon entrance to Red’s, you get the instant smell of barbecue. There’s a hard-back Bible-like menu and a tremendous array of in-house made sweet sauces awaiting you at your table. Let there be meat!

The interior has been beautifully done with zany neon signs, exposed brickwork and loads of little nooks, crannies and separate rooms surrounding the open plan and caged off kitchen.

The place is shrouded in religious connotation: a picture plaque of a nun lit up with ‘I believe’ and knife & fork crucifix symbols. You could say Red’s is a new religion – a religion of meat. And a vegetarian’s version of hell.

If you can’t choose just one meat to have slow grilled, try a combo BBQ plate. Combo One (£16.95) we had is the Baby Backs & BBQ Chicken – four-hour hickory smoked Baby Backs plus half BBQ chicken smothered in their ‘unholy’ BBQ sauce alongside one or two sides. (The chicken is served with a deliberate pink tinge, so don’t worry – it is cooked properly.)

If you’re brave (and frankly, have the appetite of a wild boar) un-cross your knife and fork crucifix, say grace and order the Donut Burger. Yes, we said DONUT. BURGER. That’s two steak patties, smoked peppered bacon, double cheese and deep fried onions nestled between a pair of sweet-glazed doughnuts – served with spicy hush puppies (£12.95). You’d probably die if you ate two but it is delightfully tasty.

By the end of your mighty meat feast, all you want to do is nod off. Or take a cold shower. 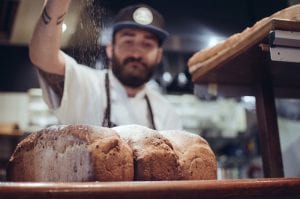 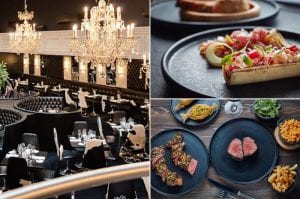 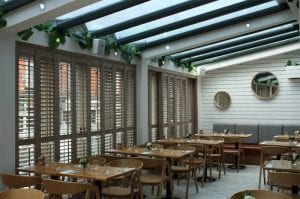