Write what you know, goes the old adage.

And for new author Ben Belcher, there was only one setting for his first novel – which includes scenes in some of our favourite venues from Mr Thomas’s Chop House to Rosso.

“I’m a huge fan of John Wick and that kind of stuff – but when it comes to these kinds of characters in films, if they’re British, they’re always centred in London,” says Ben, who works in Manchester city centre.

“And I just thought, why? Manchester is just as good a backdrop as anywhere else.

“It’s interesting, it’s diverse. There is so much culture, so much great architecture. 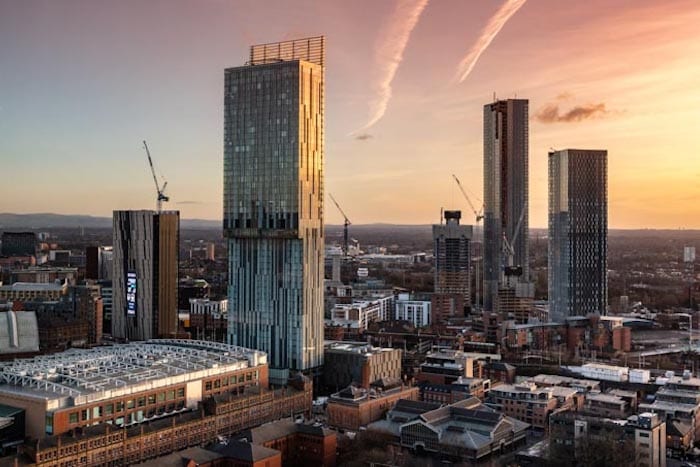 With instantly familiar Manchester locations including The Royal Exchange, Beetham Tower and King Street, Exposure, the first instalment of The Redemption Series, introduces us to Jacob Rivers: art dealer, secret assassin, and one of the most intriguing characters to walk our city’s streets.

And, as you’d expect from a gritty crime thriller, the novel delves into the seamy underbelly of the city and doesn’t shy away from shady drug deals or eye-wateringly realistic violence.

“I’ve been reading a lot of books on fighting techniques such as defendu, on weapons, on MI6 and MI5. I’m a bit of a nerd about all those things anyway,” says Ben about his research for the book.

“I wanted to keep the fight scenes realistic, as well. It had to be quick and believable, because if those things happened there would be witnesses, and people would phone the police…”

But it’s not all dark, and it’s clear Ben is very much in love with the city he calls home.

“I wanted the book to be honest, and centred in reality,” he explains.

“So there is a dark side to it, a gritty side, but to contrast that there’s the art and the culture, the friendships, the outsiders who feel at home here.

“Because that’s what Manchester is about, too.”

The novel has a filmic quality to it, and it’s easy to imagine it as the latest Netflix hit.

So who would Ben like to see in the starring roles?

“It’s really humbling when people say they’d love to see it as a film or TV series,” says Ben.

“Personally I could see Richard Madden, who was in Game of Thrones and The Bodyguard, working well for Jacob. For Laura, maybe someone like Lily James would be good. Perhaps Shaun Parkes, who was in Human Traffic, Lock Stock and Black Emperor of Broadway as Tal.

“And I think Gillian Anderson would make a great Rebecca Trafford, head of The Committee…”.

For those who have read the book – which so far has received all five star reviews on Amazon – the next question has to be: please tell us you’re writing another?

“I’m currently up to chapter eight of book two,” says Ben, who admits he gets asked the question a lot.

It’s part of The Redemption Series, and they’re all set in and around Manchester.

“It’s going to be called Insurrection, and it will expand on the relationships of the main characters.

“I’m hoping to have it ready for early next year.”

If it’s anywhere near as unputdownable as Exposure, we can’t wait.

Exposure, the first instalment of The Redemption Series, is out now.