Red Hot World Buffet Manchester – Stick a Fork in Me

It’s Friday, we’ve had a long day (and week) in work, and have about 15 invites to various different events for that night, but we really can’t be bothered! Living the high life can sometimes take it’s toll (small violins please), so myself and the Ginger Ninja wanted to stuff our faces with food, have a drink (or ten) and just seriously unwind…

With Red Hot Buffet literally on the doorstep of our Deansgate office, we thought what better place to eat as much as we can, swill it all down with a few sherbet dips, and kick back. Both of us had been last year, so we kinda knew what to expect. Being just a “stone throw away” was somewhat of an ironic quote from Ginge, concluding with “but we don’t throw stones, we live in a big old glass house.” I shall explain later…

Having booked online, there was no faffing around on the door, which was a relief. We often see queues going round the corner, and didn’t want to get caught up in that! We breezed straight through, grabbed a quick drink at the bar and were whisked upstairs. 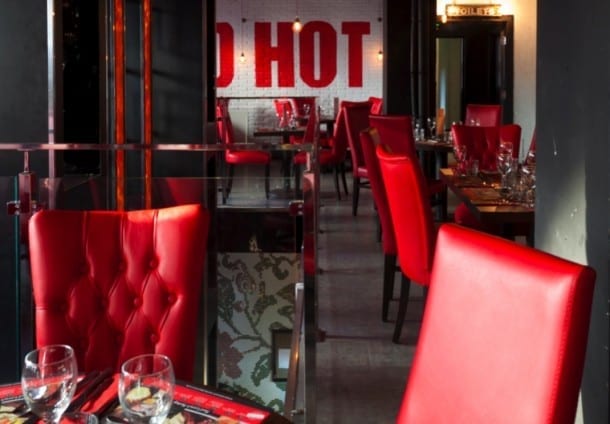 We were greeted by the manager Sandeep, who showed us to our table, a nice little booth by the window. He told us to try “everything” which we took as a challenge. Game on. With 513 covers at any given time in the 2 floor mega restaurant, we were luckily positioned quite close to the buffet it’s self, and surprisingly there was no queuing or hanging around for food. Sandeep told us the huge amount of people that dine here keep him and his 140 strong team of staff very busy, which judging from the customer service we received, works like a well oiled machine.

The decor is comparable to Vermilion Cinnabar. That’s comparable, not the same. A blend of traditional Pan-Asian themes with a modern finish. Really quite well kitted out. Judging from the fact we heard the Happy Birthday song about 9 times, we can say that RHB is definitely more geared towards large groups, and it makes sense. There is something for everyone, you don’t need to worry about what your nan likes or dislikes, or if Jo hates Indian. The choice is simply huge.

We started with a plate of freshly made sushi, we didn’t really know what we were having. If it looked good, it went on the plate. If you pick something you don’t like, so what, it’s a buffet. Go back and get something else instead! But we loved it all, and shovelled it down. 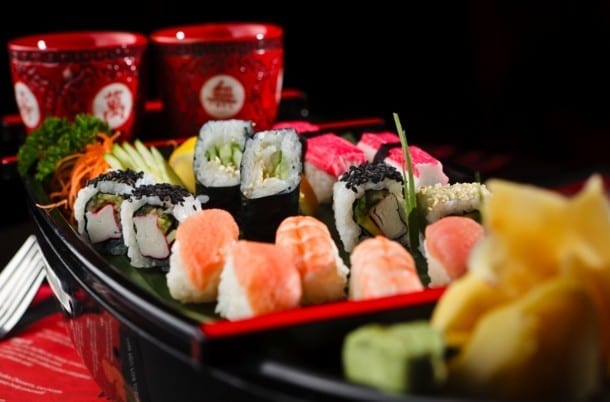 For our second course we fancied some Chinese, and opted for the tapenyaki. One of the buffets many ‘live’ counters, where the chefs are on hand to make your dish exactly how you want it, is a great addition to the buffet. We had some egg noodles and chicken with a load of veg and sauces, which the chef masterfully cooked for us on a hotplate, tossing all the ingredients round with a pair of wall paper scrapers (they probably weren’t), and it was delicious.

Between each course our waiter Adnan supplied us with and endless amount of drink (which ended in disaster, again, I’ll get on to that later), and we’ve discovered our new favourite drink – Grey Goose and cranberry. The drinks are quite reasonably priced, and the cocktails are just £4.75, practically unheard of in town.

Third course was curry, I went for chicken tikka masala with pilau rice, and Ginge slopped a bit of everything on his plate as he couldn’t decide which one he wanted. So he got them all. Again surprisingly fresh and succulent. The meat was big and chunky, not amazing, but certainly better than Allen’s Fried Chicken. That was the ingenious comparison we made at the time.

Plate number four was Italian. Another live counter, we both went for some spaghetti carbonara, with chicken and ham. Made to our specs, it was pretty damn good, especially considering the chef made it in about 3 minutes flat. Nice and creamy, but pretty heavy. We were getting pretty full at this point, but soldiered on like heroes. 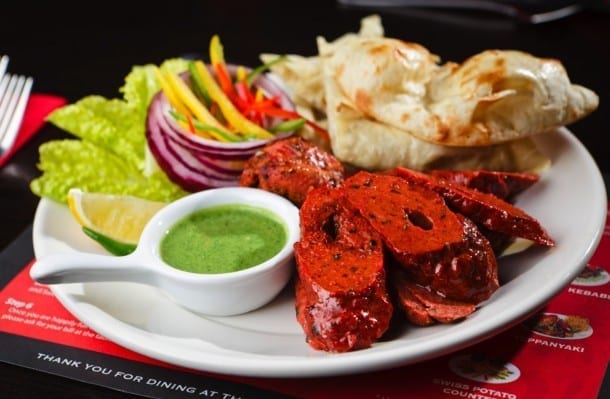 Our fifth course, yes FIFTH, was a bit of Tex-Mex, we had some spicy chicken wings, corn on the cob and a bit of salad stuff. The wings had some straight from the oven, and were really fresh and juicy.

We needed a bit of a breather, so from Adnan’s advice we ordered some cocktails, a Blue Lagoon and a Long Island Ice Tea. They were both huge, and very nice, if not a little too big.

On to deserts, we pigged out and got a bit of everything, from waffles to pancakes, ice-cream and cheese cake, but unfortunately we didn’t manage to finish them, not because we were too full, but because we had a bit of a disaster. Apple crumble and custard, get in! Pancakes, brownies, ice-cream… stick a fork in me, I’m done. 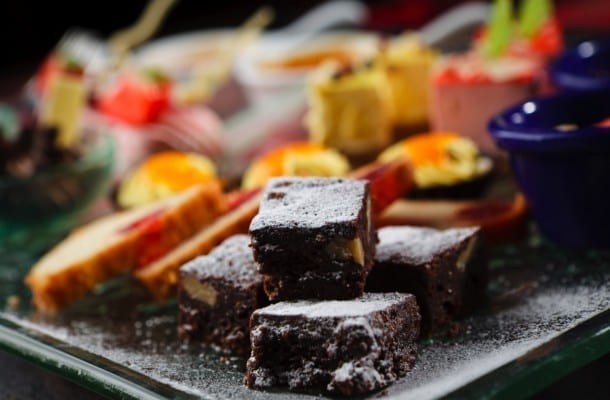 We felt the need to congratulate each other on our triumphant eating and drinking achievments, by toasting with our enormous cocktail glasses. CHEERS! SMASH! Ginge’s glass exploded all over the table, himself, and our food. It made such a huge noise and we caused that much commotion with our fit of laughter it made everyone turn and look at us, it was hilarious. Luckily everyone else saw the funny side too, and this time we were not thrown out, which makes a nice change! We needed a couple of mojitos to calm ourselves down, and decided not to toast again.

To conclude, RHB is very good for what it is – a huge buffet, with loads of different flavours. It’s not fine dining, or anything even close, but then again it doesn’t try to be. Perfect for a family birthday or something different with a group of mates. Probably not a good idea to go dancing afterwards, mind.

Red Hot Buffet is HOT but not marriage material.