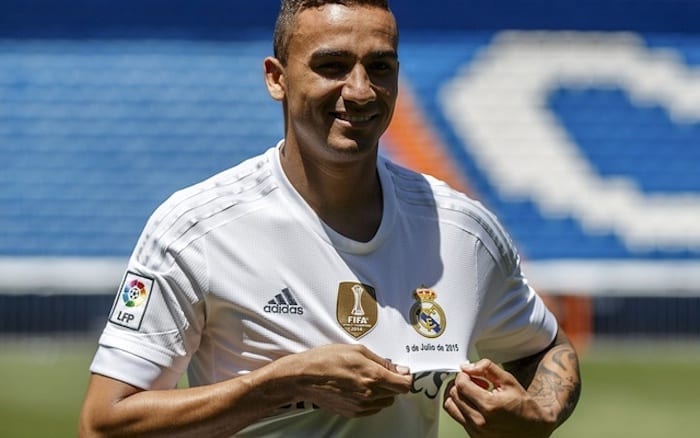 Just a few weeks ago Gabriel Jesus was hopeful he had done enough to convince out-of- contract Brazilian team mate Dani Alves to come and join him at Manchester City.

Although the initial signs looked positive, Alves opted to sign for PSG instead.

Jesus must have been busy because today City secured the signing of another Brazilian in the shape of Real Madrid right back Danilo.

The 26-year-old was also targeted by current Premier League Champions Chelsea but turned down a move to Stamford Bridge in favour of working with Pep Guardiola.

After signing a 5 year deal and completing a medical, he told the club’s official website: “I am very, very happy to be joining Manchester City. There has been strong interest from other clubs but it has always been my ambition to play for Pep Guardiola. As soon as I heard of his interest, I knew immediately I wanted to be a City player.”

Pep has been busy in the transfer market recently, signing Tottenham right back Kyle Walker. Danilo is likely to challenge Walker for the right back position but can be used as a left back or in midfield if required.

The former Real Madrid star will not only strengthen City’s defence but, like many Brazilians, has the ability to get forward and score goals too – 11 for Porto between 2012-2015.

The Brazilian began his career at America Mineiro before making a move to Santos in 2010 where he scored the winning goal in the 2011 Copa Libertadores.

City’s director of football, Txiki Begiristain, says he is delighted to have landed the Brazilian.

“Danilo is a fine player who offers great versatility to our squad,” he said. “He can operate in several different roles in both defence and midfield, increasing Pep’s options ahead of the new season.

“We feel he has all the attributes needed to succeed at City and we look forward to helping him develop during his time here.”

He has already met up with his team mates in the United States where City are due to take on Real Madrid on Wednesday at 8pm (4am Thursday morning in the UK).

With only weeks to go until the new Premier League Season kicks off, Danilo is a welcome addition to the Manchester City family.

Why not go to the City website and checkout his first CityTV interview?

For the full Man City experience why not get your City fix by joining the brand new Summer Man City Stadium & Club Tour?

It all begins in the interactive exhibition space which celebrates the past, present and future of the club.

You’ll be whisked across to the state of the art training facility at the CFA for a unique opportunity to see where City’s Academy teams, Manchester City Women and the first team train during the season – an experience not to be missed.